This is the first of a new wave of HP inkjet printers that are Internet-connected out-of-the-box (assuming you have a broadband link, of course). The advantages, say HP, are that you can print from anywhere, simply by sending an email to your printer. 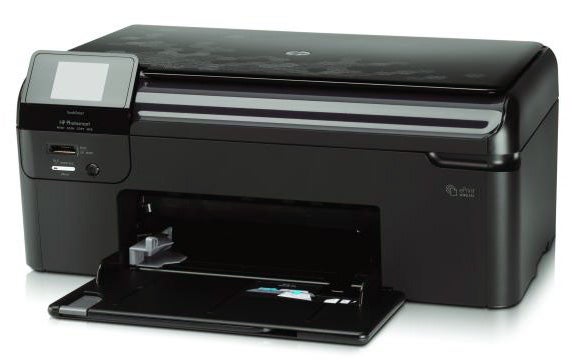 Its matt black case, with glossy lid punctuated with a hexagonal motif, is a conventional HP design. The input tray folds down from the front panel and can take plain or photo paper, though not at the same time. An output support with flip-up paper stop swings out from the front lip of the tray, giving a simple, but slightly ungainly, paper handling system.


The control panel is unusual as the 2.4in LCD display is surrounded by six, illuminated touch buttons, in what HP calls a Touch Frame. These are sensitive and easy to use, though the left and right arrow buttons are also used for moving up and down menus, which is confusing. 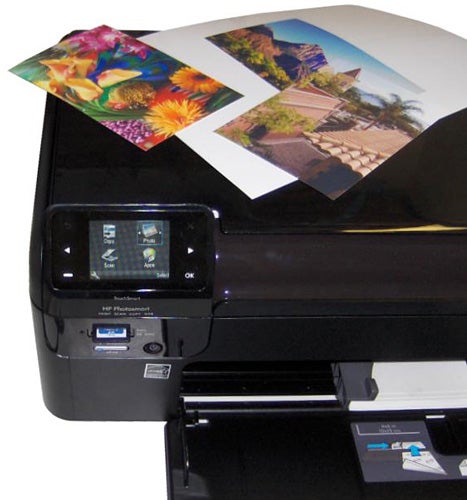 Our out-of-box experience wasn’t great. It took quarter of an hour to remove the glue the advertising label left on the lid and the machine then claimed the 364XL cartridges supplied with our review sample (and mentioned on the box as suitable consumables) were incompatible. HP tech support sorted it by providing an arcane sequence of touch key presses to reset the machine.


Software installation is boringly long-winded and the wireless setup includes having to enter the IP address of the Photosmart into the software – something we’ve never had to do before. Still, installation only happens once.


As with Lexmark’s SmartSolutions, HP’s apps have to be selected and downloaded from a dedicated site via a computer. If the idea is to make the printer more of a standalone device, the site really ought to be accessible directly from the Photosmart’s control panel.


It’s early days yet, but there were only six apps available on the HP site for this printer, including ones from Disney, DreamWorks and Yahoo. Most involve printouts for youngsters, such as join the dots puzzles, but with HP ‘s industry clout, we imagine the selection will grow quickly.

We obviously had to try printing via e-mail, which involves registering the printer with the HP site and obtaining an e-mail address. You also need to register send addresses that the printer should accept e-mails from, to avoid printed spam. The printer’s e-mail address can be changed if spam becomes a problem.


We sent an e-mail with text and graphics in the body of the message and an attached graphic. Within a couple of minutes, the Photosmart Wireless printed out the e-mail, with the attachment printed in the corner of a separate sheet. We sent from a PC, but it should be just as easy to send from a PDA or smartphone. There appears to be no option for formatting an attachment from within its host e-mail. 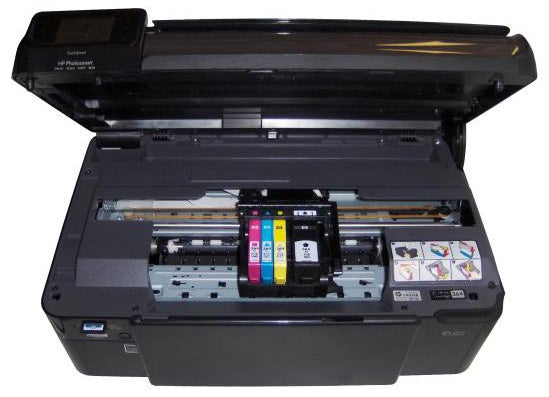 HP now quotes both draft and normal mode print speeds, offering normal speeds of 9ppm for black and 8ppm for colour print. Our five-page black text print produced 6.7ppm, but this increased to 7.9ppm for the 20-page document. Switching to fast draft mode made little speed improvement, with the five-page draft test producing 9.7ppm. The five-page colour test gave 4.7ppm, so overall, speeds are very healthy for an all-in-one in this price bracket.


They would be a lot faster, though, if the printer didn’t do so much fidgeting around before starting to print. We measured processing times of up to 25 seconds while the printer made various squeezing noises, presumably priming its ink system.


Over the years, we’ve come to expect HP print quality to vie with Canon for the top slot, but the quality from the Vivera dye-based inks is not as good as we’ve seen before. Black text looks jagged and spiky on anything more than a passing inspection and bold text suffers worse than normal characters. Draft mode print offers satisfactorily full character shapes, but still shows fuzziness around many letterforms. 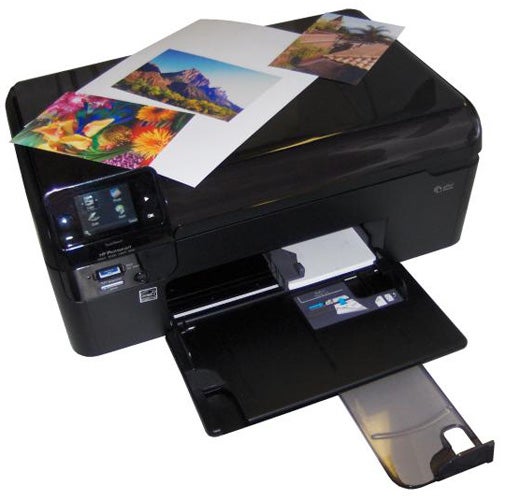 Against this, colours on plain paper, such as for business graphics, come through bright and smooth, with solid fills showing little sign of dither patterns. A colour copy lost little of the original’s vibrancy. Photo prints are excellent, with natural colours, smooth colour transitions and plenty of detail in both brightly and dimly lit areas of images.


The four ink cartridges are available in two capacities, with the XL versions giving better economy. Using these consumables gives a cost per page of 3p for black print and 7.6p for colour, both including 0.7p paper cost. Both these costs are reasonable when compared with a range of recent inkjet all-in-ones we’ve reviewed. However, it’s still quite a bit more expensive to run than the best in class Kodak ESP 7250, which gives 2.1p and 4.4p using the same calculation.


At the risk of ending up like Ken Olson, President of DEC, who said “there is no reason anyone would want a computer in their home”, we’re still struggling to see the advantage of printing remotely, from the other side of town/country/world. You won’t be able to see the print-out until you get back to your printer, so why not print then? It might be useful to send a document to a friend or colleague’s printer, but only if it’s beyond them to receive it as an attachment and decide for themselves whether to print or not.


The Photosmart Wireless e-All-in-One – don’t forget the ‘e’ or you’ll end up with a different model – prints reasonably cheaply and reasonably fast, though text on plain paper isn’t wonderful. At the price, it’s a fair choice, though HP could do some work on ink housekeeping, so it’s quicker to start a print job.