HP produces printers for the consumer and professional inkjet markets, but until recently, not much for the semi-professional or sole-trader professional. The Photosmart Pro B9180 fills this gap and also showcases HP’s scaleable print technology, in which it’s placing a lot of faith for future developments.


This is a big printer, but has a solid, professional feel. Large areas of plastic in A3+ printers often feel flimsy, but not here. It has a functional design – boxy, but with a curved front edge. The main paper tray, which can be used for any paper from 15 x 10cm to A3+ paper, extends, so you only need to open it up when using larger sizes. The cover telescopes out, too.


The brushed metal front panel folds down to reveal a secondary, straight-through paper path. Paper from the main tray performs HP’s normal 180-degree turn before being printed, but in the top tray, it travels unencumbered from front to back, which means the B9180 can print on card up to 1.5mm thick. Don’t back the B9180 up against a wall, though, if you intend to use the straight-through tray.


The two line by 16-character LCD display is well used to show status messages and instructions and the row of five buttons underneath is all you need to navigate its menu system. At the back are USB 2.0 and Ethernet sockets; the printer is network enabled, straight out of the box. 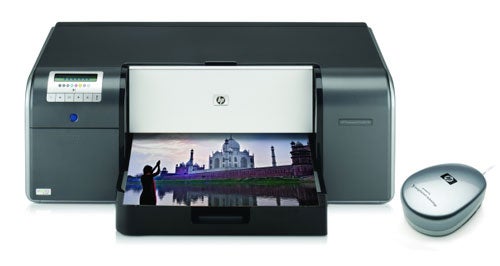 Consumables installation is an involved process. It uses separate ink cartridges and print heads and these have to be installed and primed in a set order. Start by opening the cartridge cover at the left-hand end of the printer and plugging in each of the eight cartridges; they have keyed mouldings, so each only fits in its respective slot. The printer then primes them, by pumping ink from the cartridges to the point where the heads would be, had you fitted them.


When prompted from the LCD display, open the top cover and fit each of the two-colour heads, first removing the stoppers on the ends of the tubes from the cartridges. You’ll also need to wipe each print head with a spirit-soaked, ‘super cotton bud’, supplied with each head, to get the ink flowing.


Now load the ‘calibration pack’, actually 10 sheets of A4 Advanced Photo Paper, and let the printer do its own calibration, which involves a wait of around 30 minutes and several test prints, which get progressively better in quality. Full calibration is a once-only process, though ‘closed-loop’ calibration happens whenever an unrecognised new media is used in the printer.


While you’re waiting, you can install the software, which includes a comprehensive driver, a Photoshop plug-in and HP’s Photosmart Premier application. This last is a simple photo editor, which won’t give Adobe any sleepless nights, but is enough to make basic edits and to resize, crop and select images for printing.


The B9180 is clever. Not only does it auto-sense the paper type its using, using bar codes on the back of HP sheets and its own densitometer to calibrate for other types, but it also senses paper sizes. It won’t print an image that’s too big for the loaded paper, which is good, but even tells you if the paper is bigger than it needs be for a given image – a help in avoiding waste of expensive photo papers.

Pages printed with the B9180 are of very high quality. HP uses pigmented inks throughout, to give excellent fade resistance, accredited at over 200 years by the Wilhelm testing lab. There are two blacks: matt for text print and photo black for images, and the other extra colours are light cyan, light magenta and light grey, as well as the regular cyan, magenta and yellow.


Colours are vibrant, but well controlled, so images don’t look over-excited when they’re not intended to. Our colour test image was one of the best we’ve ever seen. Reds, greens and blues are all well-rendered, looking natural and true. Detail is fine, with sharp edges and intricate lineage and colour gradation is smooth, with no noticeable bands.


Colour print on plain paper is also very well handled with clean, stipple-free fills and plain text is clear and precise. Black print isn’t quite as dense as we might like, and black and white images look a little darker than the originals, but this is nit-picking. 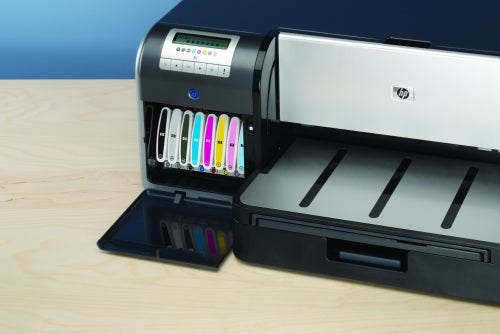 Print speeds are good for this class of printer, and noticeably better than from the cheaper HP Photosmart 8750, tested a few months back. Our five-page text document took 1 minute 18 seconds to print, which is fair for a machine designed for photo printing. The five-page text and graphics print took only 21 seconds longer, but it’s when you look at the A3+ print, coming in at 2:12, you realise speed hasn’t been sacrificed on the altar of print quality.


As an inkjet, you’d expect the sound levels to be low and in most places they were below what we could measure. There are a few pumping cycles and clicks while the printer is maintaining and recirculating its inks, but these shouldn’t prove annoying.


During installation of the B9180, we inadvertently interrupted its calibration cycle. We ran it again, so by the end it had printed six, A4 test pages. At this point, the printer reported having used nearly half of its matt black ink, and between 20 and 30 per cent of most of the others. We assume this is a problem with ink estimation software, as HP quotes 870, 15 x 10cm prints from a composite of the seven colour cartridges.


Even at this usage level, the printer costs around 55p per print on A4 paper, mainly due to the high cost of HP’s Advanced Photo Paper, which we couldn’t find for less than 44p a sheet. The price of this media should fall, though, so the print cost should also fall over time.


Oddly, the black print cost for a five per cent text page comes in at just 1.5p, low for an inkjet. Again, the low cost of plain paper is a big factor in keeping this down.


HP’s new pigment-based Vivera ink technology takes a lot of beating. The vibrancy of colour prints is superb, marred only by slight darkening of black and white, which may need some compensation. Put simply, if we wanted a medium format inkjet photo printer and had less than £500 to spend, we’d buy the Photosmart Pro B9180. 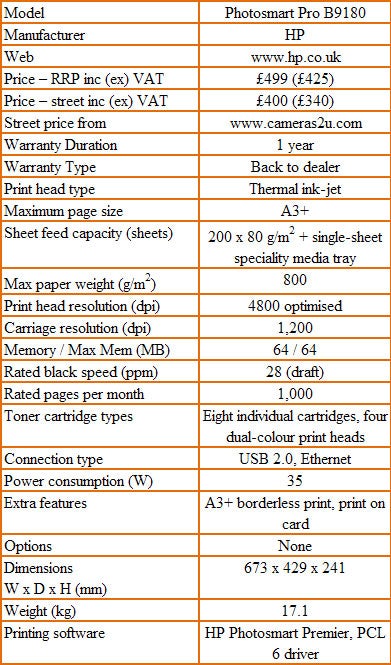 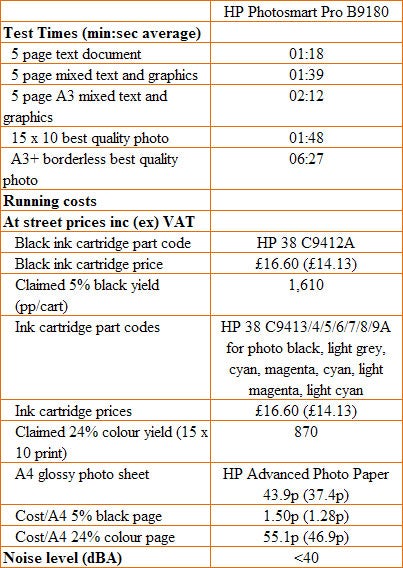