HP used to use the slogan ‘HP Invent’ and over the years the company has come out with a number of innovative printing tools including, arguably, the first all-in-ones. In an attempt to repeat the step-change, it first introduced the Internet-aware ePrint facility and has taken the idea further with the Photosmart eStation C510. 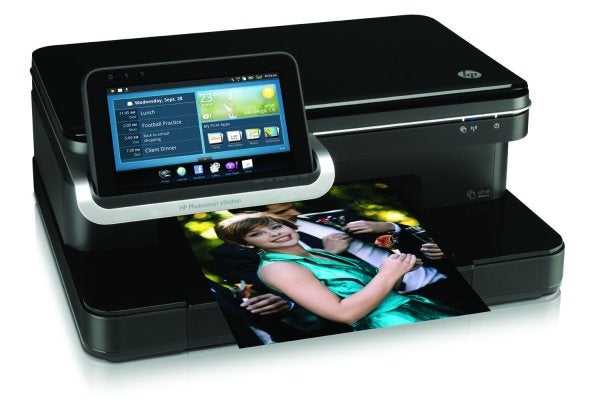 As the touch screens on high-end HP all-in-ones have been getting bigger, perhaps it’s a natural progression to reach the stage where the one on this machine is removable as a separate mini-tablet, which HP calls the Zeen. It slips into a holder at the top-left of the machine’s front panel and connects wirelessly with your router, so can be used away from the printer, in addition to being its control panel.


The rest of the machine has a straightforward design, though unusual styling. The twin paper trays layout, with a 125-sheet plain paper tray fitted below an automated photo paper tray, which can take up to 20 sheets, is conventional enough.


The only memory card connection is a single SD slot set into the top edge of the Zeen, so printing photos from cameras is more awkward than on some other models. There’s not even a PictBridge socket as a catchall for cameras using other card formats.


The flatbed scanner uses a Contact Image Sensor (CIS) with no Automatic Document Feeder and the duplexer is a clip-on bulge at the back. The power supply, even on this very high-end machine, is still a separate power block, free to kick around under the desk.


The Photosmart eStation C510 has a USB socket at the rear, but no Ethernet capability as an alternative to its wireless connection. Wireless setup is pretty straightforward and you can use the touch keyboard on the Zeen to enter your WPA pass code. 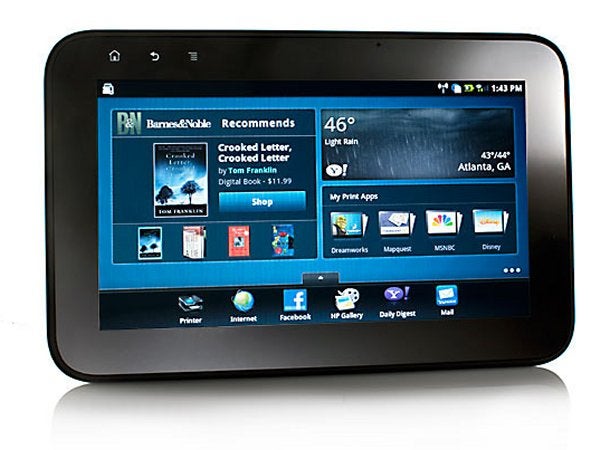 The machine has drivers for both Windows and OS X and comes with support software for both platforms. The five ink cartridges, including both pigmented black and dye-based photo black, clip into the pre-fitted head, as on several other recent HP launches, including the Photosmart Premium eAll-in-One. In fact, we strongly suspect both models use the same print engine and with very similar feature sets other than the Zeen, you’re effectively paying £240 for the upgrade from touch panel to tablet.

The biggest problem with the Photosmart eStation C510 should be its biggest asset. The Zeen tablet, based on the Android 2.1 operating system should be very useful around the house as an eReader and Internet pad, but is hopelessly unresponsive. Under test, we could often wait over a second for a confirmatory ‘click’ when pressing a touch button and the same again before any action was taken. Four of five presses were sometimes needed to get a response. 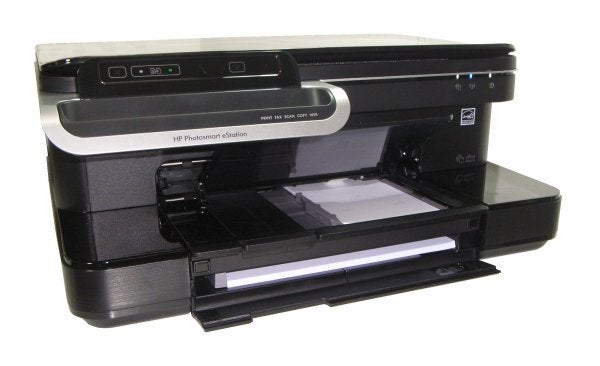 With insufficient sensitivity to touches and a slow response, you’re never sure whether the Zeen has failed to register a tap or is just thinking long and hard before acting. It’s a very frustrating experience and not helped by Yahoo! – which is used for news and weather functions – claiming its not connected to a network, when the Android browser, Facebook and ePrint apps all suggest otherwise by working fine.


With very similar print engines in both printers, the performance results from this one are very similar to those from the Photosmart Premium eAll-in-One. The differences are mainly down to variations in preparation times from run to run. The five-page text document produced a speed of 5.8ppm, which rose to 9.0ppm on the 20-page test and to 10.0ppm when printing in draft mode.


In duplex mode, standard on the machine, we still saw 4.0ppm and our five-page black text and colour graphics document produced 5.2ppm. These kinds of speeds are reasonable for an £80 all-in-one, but you might expect something more from one costing four times that. Our test 15 x 10cm photo prints from an SD card unaccountably, but repeatedly, took nearly four minutes to complete.


Black text prints suffer from some of the same fuzziness as from its cheaper sibling and from the occasional misalignment between sweeps of the printhead. Colour graphics are bright and free from obvious artefacts and the colour copy is closer to the original than many. Photo prints are very good, with smooth colours and colour transitions, though some shadow detail is lost. 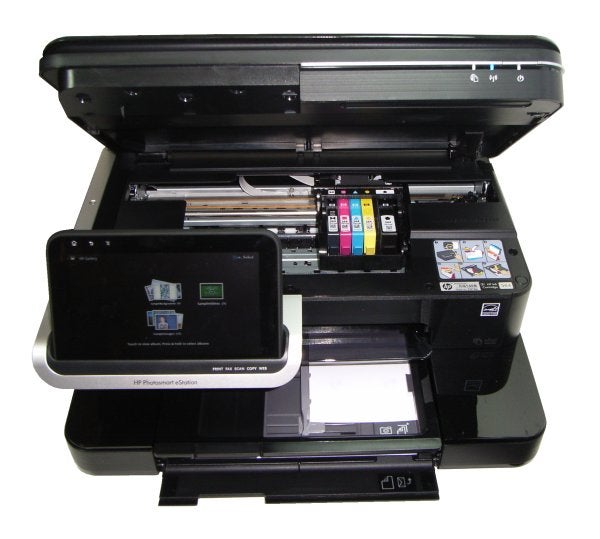 The cost per page for an ISO black page works out at 3.3p and for an equivalent colour page is 11.7p, both including 0.7p for paper. These lie in the middle of the field, though high-end machines from other suppliers, such as Kodak and Lexmark, offer reduced running costs to counter the higher printer asking price.

The HP Photosmart eStation C510 is an opportunity missed. The idea behind putting a simple tablet onto a printer, so you can easily call up a synopsis of news, weather forecast or share prices and print them out directly from the printer, is a good one. Unfortunately, the poor responsiveness of the touch screen and the slow performance of some of the software takes away most of this advantage. Put simply, it needs a better tablet.