Printer makers are always looking for improved ways for people to work with their machines. If they can make the printing process simpler and more intuitive, people will print more, use more consumables – where much of the manufacturers’ income lies – and be more likely to return to them when they want to replace their current models. HP’s latest idea is a touch screen, for viewing and selecting prints from memory cards.


The Photosmart D7360 offers a big, 86mm LCD, big enough to show quite a bit of photo detail, which can also display most of the buttons needed to select and print images, to set the printer up and perform maintenance. There are still seven physical buttons, as well as the virtual ones on the screen, for things like starting a print, switching print quality and flipping between portrait and landscape modes.


To the right of the controls is a memory card reader, supporting SD/MM, CompactFlash, Memory Stick and xD cards, but not SmartMedia – a sign that that format’s on the way out. A PictBridge socket sits below the card slots, so you can print directly from your camera, too.


There are two paper trays on the printer, with a standard 100 sheet A4 paper tray supplemented by a separate one for up to 20 sheets of photo paper. Cleverly, the photo paper tray is pulled into the machine automatically when you select to print a photo, and ejected again when the print job is complete. 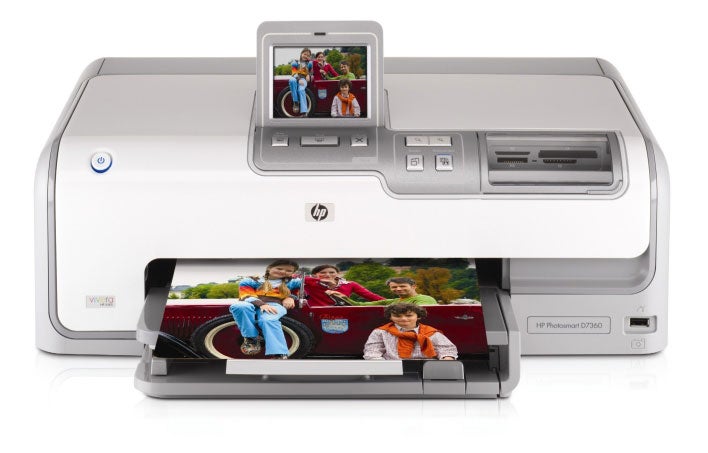 Lift the lid of the Photosmart D7360 and you have direct access to the six ink cartridges. Using HP’s Vivera inks and permanent print heads, you clip the cartridges into stationary holders and the printer recirculates the inks as needed. Interestingly, the cartridges have different quantities of ink in them, presumably worked out from typical usage patterns on a cross-section of print types.


There’s a good suite of HP software provided with this machine, including Image Zone, Director and ImageShare, which between them cover most of the printing bases. They all install easily from the CD, before connecting the printer.


There are two firmware technologies provided in the machine which can be used to improve your prints, irrespective of the image source. Automatic Red-Eye Removal seeks out the Omen effect in any of your portraits shots, without your having to highlight the offending eyes. Adaptive Lighting helps boost detail in shadowed areas of bright images.


You can use two different kinds of photo paper with the Photosmart D7360, but we strongly recommend using Advanced Photo paper. This is an absorbent paper, so the ink sinks into the surface and dries almost instantly. Photo prints come out with a photographic gloss and a clarity which is as good as we’ve seen from a digital print. Even at fast draft, which is when you approach the 12 seconds per print claimed by HP, print colours are very natural, while remaining full and vibrant.

So, things are good with Advanced Photo paper. They’re not so good with Premium Plus Photo Paper, the old HP gold standard, though. Prints look nearly as good, but they’re decidedly sticky when they come out of the printer, take fingerprints and scratches very easily and need a while to dry off completely. You can use the paper with this printer, but you’d be wise to print an image at a time, rather than a batch.


HP claims 14 seconds for a print in its publicity for the Photosmart D7360 and 12 seconds on the outside of the box. In fact it takes 15 seconds, plus another 12 for the photo tray to slide into position, so 27 seconds for a one-off, printed in fast draft mode. A fast draft print isn’t as sharp and detailed as a normal mode print, which takes around 35 seconds – still a very good time.


Plain paper prints are also quick for a photo printer, with our five page document coming through in under a minute and the text and graphics test taking 1 minute 32 seconds. 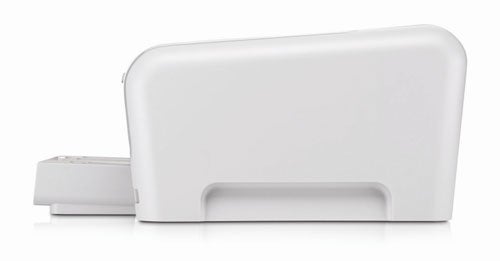 A set of the six ink cartridges in the Photosmart D3760 can be had for £30. HP claims 430 pages in colour and 1,120 in black, which results in figures of 1p per black page and 25.5p for colour. We have to go with HP figures on this machine, as HP has taken the step of putting different amounts of ink in the No 363 cartridges used in the machine.


The black cartridge contains 16ml of ink, while the yellow contains 6ml, light cyan and magenta hold 5.5ml, cyan holds 4ml and magenta just 3.5ml. With this mix, and until the ISO standard for test pages is fully adopted, calculating five per cent and 30 per cent yield figures is well nigh impossible. However, we would estimate that both page costs were a little low, in comparison with our regular yield results.


On balance, the provision of a touch panel is more than a gimmick and does make the Photosmart D7360 easier to use than a conventional photo printer. The dual paper trays are also handy and print quality on Advanced paper is excellent. Draft mode prints are very fast, though we’d still use normal mode for quality, at around 35 seconds per print.


As a postscript, we noticed that the same machine is available in the US at $199 (and currently with a $20 discount), around 40 per cent cheaper than in the UK. We thought the old £ to $ equivalence was a thing of the past, but apparently not. HP claims it’s because the D7360 was released there a while ago and the price has dropped. Compared to similar competition, the HP is a little pricey, but the speed, quality and ease of use do justify making the stretch. It’s just slightly galling that we have to pay more than our US counterparts.