HP still holds the lion’s share of the inkjet all-in-one market and produces both business-oriented machines and those intended for the photo-enthusiast at home. The Photosmart C7380 fits in the second category, though it would be fine for simple SOHO tasks, too.


HP tries hard to make its printers and all-in-ones look good and to innovate with the design of each new range. This can be done through small details, like the light blue LEDs on the buttons – dark blue is so last year. Or it can be through the work done to reduce the height of the Automatic Document Feeder (ADF), which in turn reduces the overall height of the machine, though not by a lot. 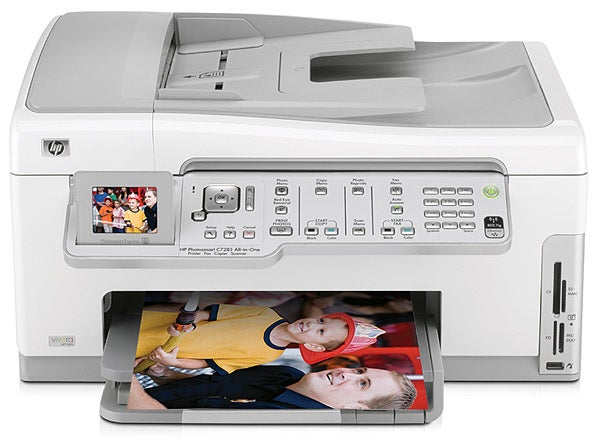 The grey and ice-white livery with silver highlights should fit the device in with most modern PC or Mac installations. Its layout is fairly conventional, with a flatbed scanner sitting on top of a six-colour, inkjet print engine. There’s a 61mm, colour LCD monitor which is well used by HP’s Photosmart Express software for control of the all-in-one and to display photos. There’s a full set of memory card readers and a PictBridge socket, set at the bottom right of the front panel.


Paper is loaded into a 100-sheet paper tray and there’s a 20-sheet photo tray integrated with this that automatically slides photo blanks forward when you select to print photos.


Installation is simple, though it can be longwinded if you need all the Photosmart C7280’s facilities. There’s built-in fax functionality, with software support and a number pad on the control panel, but no fast-dial numbers. There’s also 802.11g WiFi, so you can connect via wireless as well as through a ubiquitous USB 2.0 link.

OCR software is provided and integrated into HP Solution Center, which handles scanning photos and documents. Photosmart Essentials transfers and manages images from camera and memory card. Both these applications are well designed and cover all the basics most people will need.


Don’t be fooled by HP’s claims of 34ppm and 33ppm for black and colour print. These are figures for draft print and, even then, are pretty optimistic. Under test, a five page text job took 1min 2s and the combined text and graphics job took 1min 35s, both printed in normal mode, which most people use most of the time. These times equate to print speeds of 4.84ppm and 3.16ppm, competitive with comparable inkjet all-in-ones.


Photo prints, which took just 40 seconds for a borderless 15 x 10cm image from SD card or camera, are very quick – up to three times the speed of rivals we’ve tested. The prints we produced at this speed contain a lot of noise, though, noticeable as soon as you start to look closely at them.

The C7280 includes an ink-drying delay on double-sided prints, which is common to many inkjet machines and we’ve commented on this in previous reviews. The drying delay here is 14 seconds, which is quite long and increases the test time for a 20-side text document to 6mins 24s. This sits between mid-range Canon (longer) and Lexmark (shorter) machines.


The photos were printed using the all-in-one’s default, auto settings and you can set the machine for higher quality output, as we did for the PC print. This showed the usual clarity of detail and colour fidelity HP printers are known for. Colour variations are smooth and the scene in our test image looks natural and vibrant. 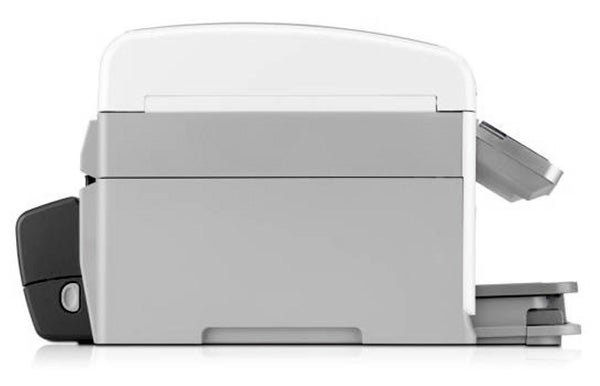 Text output on single-sided prints is densely black, though it does show some feathering of ink into the paper fibres, giving some spikiness. Double-sided print, though, suffers from a different problem where text looks greyed out, almost as if it has been printed in draft mode. When compared directly with the same document, printed single-sided, the lower ink coverage on the duplex print is obvious.


Scanning a page from the flatbed or the ADF takes around half a minute and the copy quality is good, with copies coming out with very similar colours and tones to the originals. 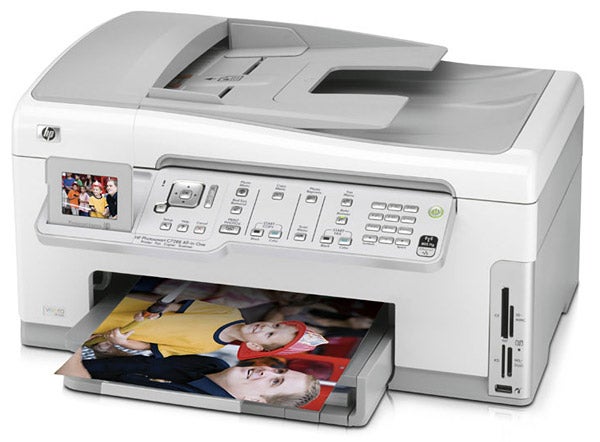 There are six inks in the Photosmart C7280, confusingly all with the number 363. The cheapest way of buying them for colour printing is in a multipack, which we found for just over £27. If you’re just buying black, though, you’d be better off going for the 363XL Black cartridge, which has a higher capacity and better economy than the black in the multipack.


Using the best prices we could find gives a black cost per page of 2.92p and a colour one of 10p. The cost of black print is pretty consistent with other all-in-ones in the same price band, but the colour cost is high, close to twice as much as the page cost of some of its rivals. We calculated the Lexmark X9575 to cost 5.71p for an equivalent page, for example.


The Photosmart C7280 looks good, prints quite fast and has many useful features – though no direct CD/DVD print. It costs a bit to run, though, and print quality is variable, depending on the document type. There was a false alarm on the pricing, where Laskys appeared to be offering the device for £130. At that price, it would be very good value. At the ‘real’ price of around £200, it’s a bit expensive compared with its rivals.