Although HP sells more All-in-One machines than any other manufacturer, it’s not generally known for its offerings at the entry-level – i.e. cheap – end of the market. The Photosmart C4280, though, costs only a tad over £50 and still has many of the attributes you would expect in a multifunction printer.


This machine has a remarkably small footprint, partly due to its foldaway design. The main aspect of this is the front cover, which folds down and becomes both the paper input and output trays. Using HP’s trademark in-at-the-front/out-at-the-front paper path means printed pages end up resting on top of the pile of paper ready to be fed in.


Given the price of the Photosmart C4280, it’s surprising to find it fitted with two LCD displays. As well as a monochrome status display which shows print quality, size and copy numbers, the 38mm colour LCD acts with three soft-function keys for selecting mode and other menu-driven functions.


The colour display shows photo thumbnails when you plug any of the common types of memory card into the four slots to the left of the paper tray at the front. It’s a bit small for any detailed images and in fact, the screen image is not particularly good, but it’s still far easier to select photos for printing with a screen, than to have to print a proof sheet and mark it up. 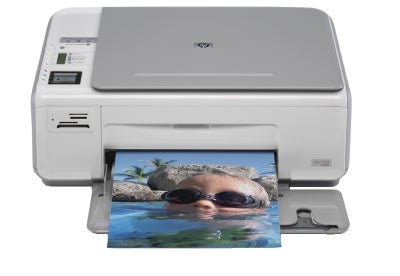 Power and USB sockets at the back are the only connections and the machine uses an in-line, black-block power supply which has to be secreted somewhere. It’s about time HP started to build its power supplies into its machines, like its main competitors do. Buy all HP kit and you end up with a pile of blocks under your desk.


The front face of the Photosmart C4280 pulls down to provide access to the two Vivera ink cartridges, one black using pigmented ink and the other tri-colour with dyes. They clip in place very easily and, particularly if you buy the ‘XL’ variants, shouldn’t need replacing that often.


The software provided includes HP’s Photosmart Express, which handles all the basic tasks you might require of the machine, including OCR. It installs simply enough and the device is then ready to go.


The extensive use of soft-function keys, where the function depends on what’s showing on the LCD screen, makes the machine easy to navigate and is a simple solution to a problem which often plagues less expensive All-in-Ones.

You might expect an All-in-One at this price to be pretty slow. In fact, though, printing black text pages is commendably quick. Our five-page text document completed in 56 seconds, giving a print speed of 5.4ppm. HP quotes print speeds up to 8.9ppm in normal mode, so this is actually closer to quoted speed than most printers.


Things are not quite so good with the colour text and graphics page, which took one minute 54 seconds to finish. Our measured 2.6ppm is not that close to the 5.3ppm claimed. Finally, a 15 x 10cm print took one minute 30 seconds when printing from a PC in top quality mode and five seconds longer when printing from an SD card. HP claims 49 seconds in normal mode and when we compared prints in both modes, there’s little difference in quality. You should therefore stick to normal print mode, wherever possible. 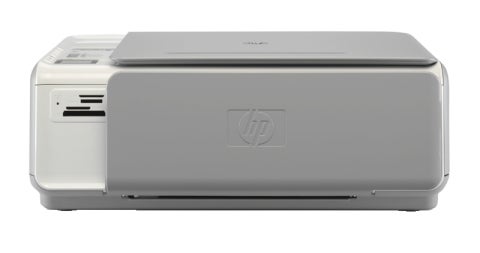 Print quality is OK, though nothing special when printing colour on plain paper. There is some noticeable banding in coloured areas and dither patterns can also be seen. Black text print is well shaped, with little feathering, due to the use of pigment-based ink. Photo prints are clear and have plenty of detail in areas of shadow and smoother toning in coloured skies and seas.


There are two ink cartridges in the Photosmart C4280, but these are available in Standard and ‘XL’ value versions, with the XL cartridges offering 3.5 times as many colour pages and five times as many black ones. Since the difference in price is just a few pounds, it pays to buy the XL consumables, unless your usage is very light.


Using XL consumables throughout and based on HPs published figures for print yield, which from our tests are pretty accurate, gives an ISO text page, black ink cost of 2.58p. This is good when measured against All-in-Ones from its main competitors, even when the asking prices of those machines are quite a bit higher.


Colour costs are also good at 6.07p per ISO page, so you’re not paying extra for consumables, to offset the low asking price of the printer itself. 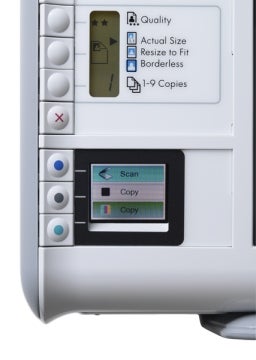 
The Photosmart C4280 has a lot going for it. It’s compact, easy-to-use, doesn’t cost that much to run and produces above-average print quality, relatively quickly. Where it scores over its main competitors, though, is in having a colour LCD display which is used sensibly for both control and previewing of photos. At the price, the other All-in-Ones don’t offer this ease-of-use feature.