A general purpose A3+ printer may not be that mainstream, but there are enough people who need prints larger than A4 to make it a worthwhile inclusion in most manufacturer’s ranges. HP has just revamped its models and come up with a strikingly designed printer in the Photosmart B8550.


Decked in ice white and pale grey, the printer has a deep inset moulded into its front panel with a shallower cut-out folding round its left-hand side. As in previous designs, the extra support needed for large sheets — this printer can cope with paper up to A3+ — comes from telescopic input and output trays. Most customers will only print larger documents occasionally and it’s useful to have this smaller footprint when printing A4 or 15 x 10cm photo prints. 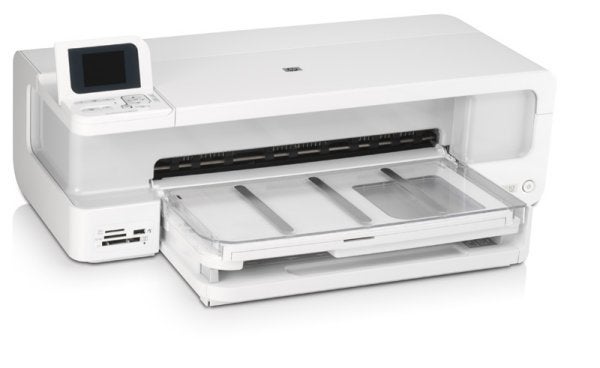 There’s also a separate photo tray, which is powered, as on some of HP’s A4 Photosmart machines, so slides into position when needed, without you having to reload trays.


In the left-hand front corner of the printer’s top there’s a simple but effective control panel and a 65mm colour LCD display. These two work together to give the same kind of controls you’d expect on one of HP’s A4 photo printers.


At the bottom left of the front panel are three memory card slots for all the popular types and a PictBridge socket for camera connection. Again, this kind of support hasn’t always been available on wide-carriage printers, which is something of a surprise, given that many of them are bought by photo enthusiasts. 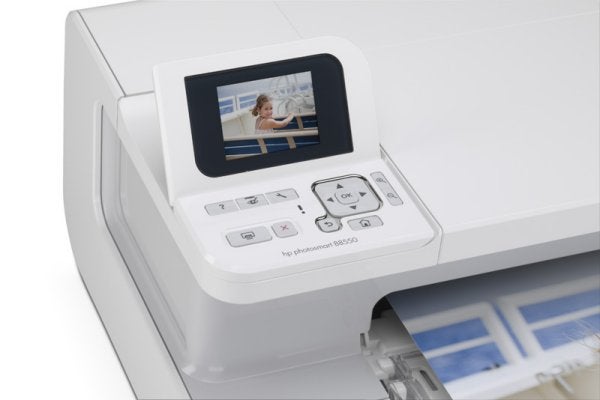 Also surprising is the single USB socket on the back. There’s no network connection and no Wi-Fi though, again, you’d think a relatively expensive asset like this was ideal for sharing in this way.


Installation is pretty straightforward and HP includes its driver and a standard set of utilities. The driver includes support for manual duplexing and for the larger paper sizes and fair support for colour, including individual colour adjustment and support for Abobe RGB.


HP has had a good look at Canon’s head and cartridge design with the five ink cartridges in this printer. From the clip-in print head, to the pull tabs on the shrinkwrap and the twist-off nozzle seals, the two designs are very similar. That’s no bad thing, as Canon’s PIXMA print systems produce some of the best results on the market and its clip-in ink tanks are very easy to service.

We’ve never known a printer do more housekeeping than the Photosmart B8550. It’s forever making scrunching noises, not unlike squeezing the last drops out of the bag inside a winebox. It regularly added 30 seconds onto the time for the start of a print job and on one occasion took 1 minute 20 seconds before feeding the first sheet of paper. If you don’t normally run your prints in batches you could have a lot of waiting while the B8550 fidgets around.


HP claims speeds of 33ppm for black print and 31ppm for colour, but fails to explain why anybody would buy a wide-carriage photo printer and then print their documents in draft mode. In normal mode, we saw a best black print speed from our 20 page document of 7.95ppm, including 30 seconds faffing around before starting to print. 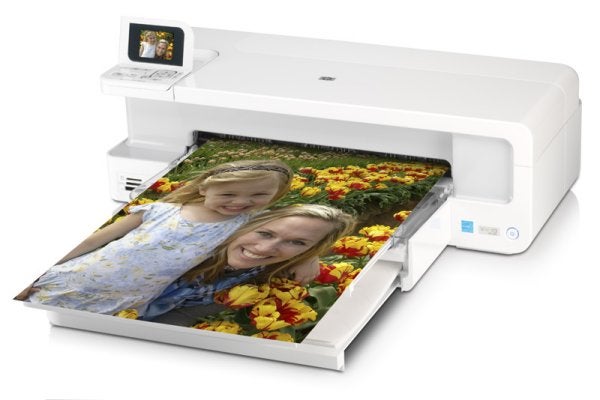 That was for an A4 document; when we bumped the size up to A3, the speed dropped to 3.9ppm. The speeds are still very reasonable for an inkjet printer; it’s just the claims that are outlandish. When it comes to photo printing, the machine regularly produces a 15 x 10cm print in 1:10, which is a good speed, though not up to Epson’s, the class leader. An A3+ print took 2:51, which is a very respectable time for a large image.


The quality of the prints coming out of the Photosmart B8550 is generally very good, as you would expect from HP. Black text print is clean, with no visible feathering and generally smooth characters. Areas of colour on plain paper are strong, though yellow looks a little muddy.


Our test photo prints were well reproduced from the four-colour ink system, though some shadow detail was lost. It was also interesting to note that colours varied between printing on HP’s Premium Gloss and its Advance photo papers. Images are paler on the Advanced paper, with a shift towards yellow, though the level of detail on both papers is good.


There are five inks to consider when buying consumables for the Photosmart 8550, as both dye and pigment black are provided. HP supplies standard and high yield versions of its cartridges and using the high yield versions throughout gives costs per page of 2.95p for black print and 7.36p for colour. Both these are reasonable, though the black is a little on the high side, while colour is better value than most.

This is a good, wide-carriage printer, with the convenience of photo preview from its LCD display. It’s not without its idiosyncrasies, though. The most annoying of these is its sometimes lengthy preparation at the start of print jobs. We could understand this if its heads and ink tanks were separated, as more priming would be needed to keep the system charged, but with a relatively simple design like this, it’s hard to see why it’s necessary.