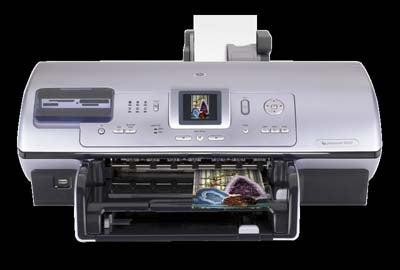 The Photosmart 8450 is close to the top end of HP’s range of photo printers and boasts the company’s latest eight-ink print technology. This means that in addition to the three primary colours, cyan, magenta and yellow, there’s a light cyan, a light magenta and three different grey levels, known as photo grey. HP claims that photo grey improves the light tones in both colour and black and white prints making output from this printer up to photo studio standards, a claim which we were eager to test.


If desk space is tight beware, as this is a fairly big machine. This is because it has to allow for all three print heads to surround a full A4 sheet due to the Photosmart 8450’s ability to produce full-bleed A4 prints. It follows HP’s normal design, with paper feeding from a 100 sheet tray at the front, making a 180-degree turn and being printed on and ejected to a paper-out tray directly above the feed tray.


Mounted centrally in the front face of the printer is a 63mm diameter colour LCD screen. This can be used to view thumbnails of pictures from a camera memory card and to navigate the printer’s menu system. If all you want to do with it is print from cards or a PictBridge-compatible camera the printer doesn’t require connection to a PC. It can take seven different varieties of memory card, using a built-in card reader placed under a smoked acrylic cover at the left-hand end of the control panel. If you do want to connect to a PC you can use a USB 2.0 cable or directly into a 10/100 Ethernet network using the built-in socket.


The other controls are well laid out, with a jog-dial for menu selections at the right and selection controls for pictures directly under the screen. The 8450 supports HP’s proof-sheet printing, where you can print a page of thumbnails and select individual shots and sizes by colouring in check boxes with a pen, before scanning the sheet back in through the printer. As well as standard A4 sheets, the HP can take various sizes of photo paper, including a new panorama strip which enables direct printing of several stitched shots taken on specialist panorama cameras. Additionally, the printer driver has been redesigned and the main screens for selecting features such as paper type and print quality are indeed easier to use than earlier versions.


That takes care of the set up and design of the machine – but what of print output? Well, it has to be said that it’s superb. Photo prints from the eight-colour system, using tri-colour, photo-colour and photo-grey cartridges really do benefit from the larger colour gamut available, which succeeds in reducing any colour-shift in greyscales to virtually imperceptible levels. 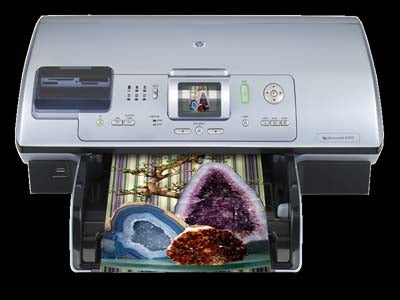 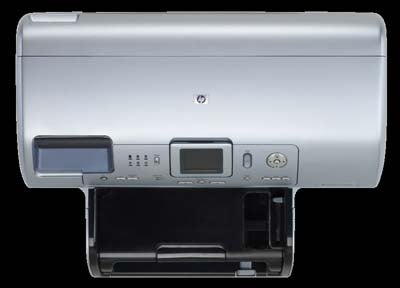 Greyscale prints are excellent too, from the depths of a slate quarry to the heights of a snowfield. The additional shades of grey provide extra detail in shadows, which are often missed in other prints, including those from HP machines with fewer inks. While we would still stop short of calling them studio quality, they’re certainly up to proofing duties and pretty amazing from a consumer printer at this price.


Speed isn’t as much of an issue with a photo printer as with a general-purpose one, but the results we obtained show this machine to be reasonably quick. Printing standard black text, using a black cartridge as a replacement for the photo black – a caddie is supplied so the cartridge not in situ doesn’t dry out – produced a five page document in 56 seconds, or around 5.5 pages per minute. A 5 x 3in photo reproduced in just under two minutes.


On a six or eight-colour printer, running costs are hard to calculate, particularly when the extra inks – photo colours and/or photo greys in this case – are not used as heavily as the black and the primary colours. Actual usage depends on the type of photos you print; the photo inks are intended to improve light tones, like flesh tints and sky shots. If you mainly print images of steam engines emerging from tunnels, you won’t use much photo ink when you print your pictures.


We were disappointed that this printer didn’t achieve either its black or colour ink-yield claims, falling short by over 100 pages in each case. HP used to be very conservative in its estimates, but its new print cartridges don’t hold as much ink as the previous generation and, even with the same test pages, we can’t achieve the usage HP does. Even so, the printer produced a text cost of 3.4p per five per cent black page. It isn’t the cheapest you can go, but is fair for the quality of print, and the figure of 33.3p for a 20 per cent colour page with photo highlights is also reasonable.


Aside from having to replace ink cartridges more often than you might have expected, there’s very little to fault with this printer. It’s easy to use, versatile, and produces results which really are out of the ordinary. 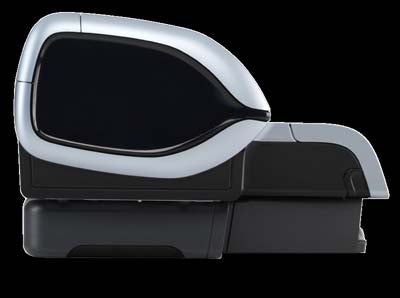