There’s a lot new in HP’s Photosmart 8250, most gathered under the umbrella heading of Scaleable Printing Technology (SPT). This is quite a break from tradition for HP, at least for its home and SME printers, as the 8250 uses six separate ink cartridges, which ”aren’t ” built into a replaceable print head.


HP has developed a single, massive (in printing terms) head, photolithographically etched from a silicon wafer and presenting no less than 3,900 ink nozzles. This means it can print very quickly, over a wide swathe of the paper. It feeds this head with ink from separate cartridges, in much the same way Epson and Canon do, but HP recirculates the ink, to help prevent bubbles forming. This way, it doesn’t have to purge the head by ‘spitting’ ink onto a sponge every so often. 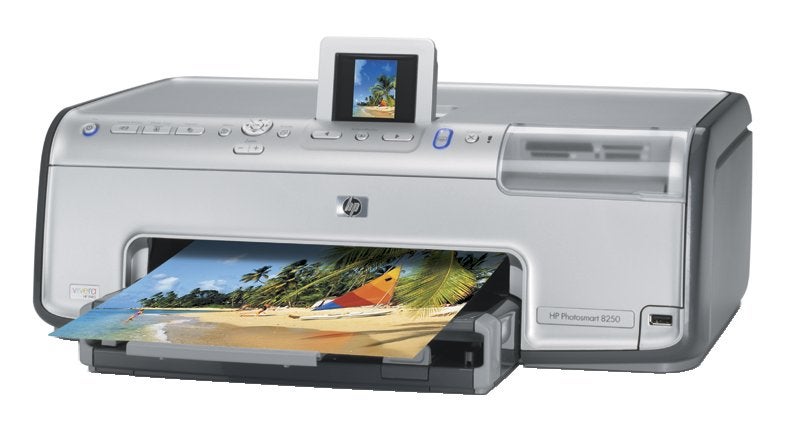 Combined with SPT are Vivera inks, a new formulation which HP claims offers over 80 years fade resistance and almost instant drying, so there’s little worry about smearing, as one print lands on top of another in the output tray.


The Photosmart 8250 has pleasantly simple lines, without the wealth of buttons and lights seen on some of its rivals. A single row of buttons is augmented by a button wheel for menu navigation and a big blue indicator to show printing. At the extreme right there’s a memory card reader under a hinged cover, supporting CompactFlash, SD/MMC, MemoryStick and xD, but not SmartMedia – those with older cameras beware.


In traditional HP style, paper feeds from a tray at the front that can hold around 100 sheets and ejects on top of the tray. On the 8250, though, there’s a separate tray for 6 x 4-inch photo blanks, which can be filled at the same time as the A4 one. The printer draws the photo tray in when you specify 6 x 4 prints and ejects it again at the end of the job. 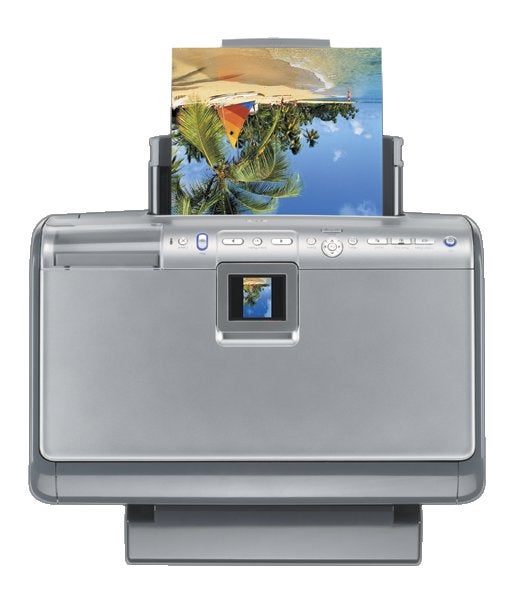 The SPT system links the new silicon head to six, separate ink tanks which are all mounted conveniently in a line under the hinged top cover of the printer. The cartridges are all coded, so each one only fits in its own position, and they snap into place with a minimum of fuss. The rest of the installation is the usual procedure: install the software, plug in a USB 2.0 cable and print.


HP claims phenomenal print speeds for this printer; just 14 seconds for a 6 x 4-inch print. The good news is that we produced one in nine seconds, but this is tempered by the fact that it was only in fast, draft mode on A4 plain paper. This may be good for a quick proof, but isn’t going to be what you give to your granny to show off the kids. When you switch to glossy paper or to 6 x 4-inch print blanks, the speed drops dramatically, though we still saw our test 5 x 3 print at best quality complete in 1 minute 19 seconds, which is respectable.

HP used to take pleasure in trying to persuade reviewers to test rival products – particularly those from Epson – over prolonged periods, because they know the Epson mechanism has to stop periodically to purge ink from its system, which slows it and reduces its page yield.


Well, it works both ways, and HP’s new system now stops roughly every 30 pages to perform ‘maintenance’, purging its own system and recycling ink for around 30 seconds at a time. On longer print jobs, this obviously extends print times. 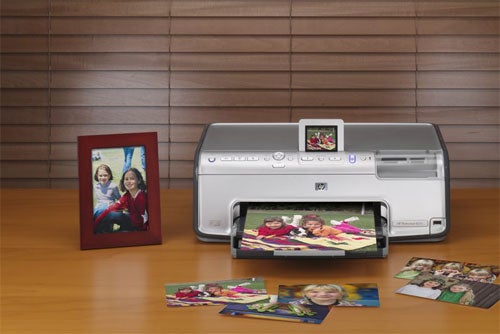 The printer driver helpfully shows you how much ink is left in your cartridges, though we printed 200 colour test prints in cyan, magenta and yellow and the driver claimed we had used no cyan ink. The software doesn’t show progress of the job, either, so you don’t know how many pages are left to print.


Print quality is well up to HP’s usual standards, with dense, black print and hardly any perceptible fringing. Colour graphics printed evenly with no noticeable banding, though saturation wasn’t complete in blocks of lighter colours. Six-colour photo prints were very sharp, with plenty of detail in darker areas and smooth colour flows in skies from mid-haven to horizon. Colour reproduction was pretty accurate, even without going through any colour matching. 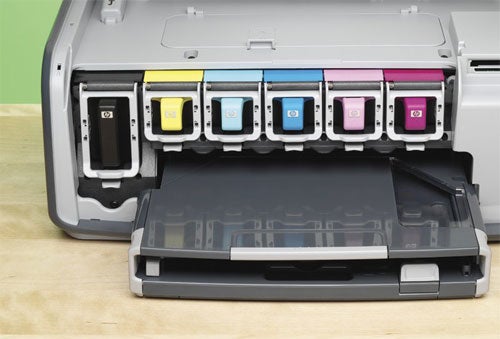 It pays to shop around more for HP consumables than most. We managed to find A4 glossy photo paper at just 22p per sheet, which reduces the overall cost of photo printing to 40.5p for 30 per cent of an A4 sheet. Plain paper, black prints, even with the greater page yield of the high capacity (17ml) cartridge, come out at 3p per page, so HP claims of lower running costs aren’t born out by our tests.


It’s not easy to see where the advantages of SPT lie for the customer. While you can get a lot of pages from a single black cartridge, neither black nor colour prints are much cheaper than from previous HP models. The much hyped, 14 second print is a bit of a gimmick, as it’s restricted to A4 printing only, and it’s countered elsewhere by the printer having to pause for maintenance, during longer print jobs. Even so, this is a capable photo printer, which also handles plain paper documents well.