Nobody can say the industrial design of HP inkjet all-in-ones is mundane. In its latest round of machines, it has tried hard to break away from the square-box-with-a-scanner-on-top look of many home multifunctions. The Photosmart 7510 shows the designers’ latest outing.

You’d be forgiven for thinking this machine could handle A3 paper, as the lower section, which houses the paper tray, runs the full width of the machine. In fact, though, it’s a standard A4 printer, with a 125-sheet tray topped off by a 20-sheet photo tray, which powers into the machine when photo print is selected. 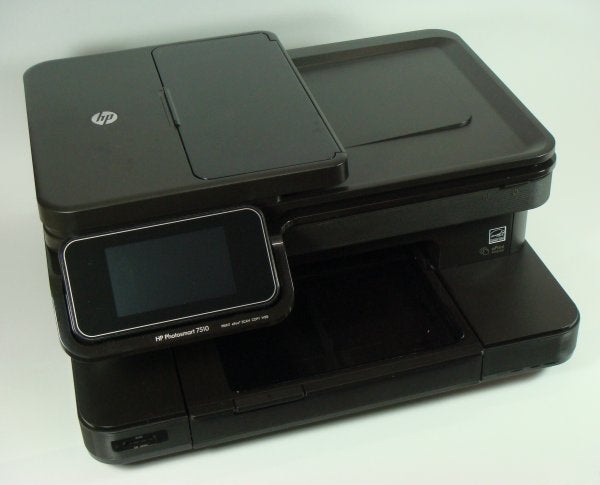 There’s no real reason for the extended surround at the bottom of the machine, though it does hold a memory card reader for SD and MemoryStick cards. Pages feed out onto the top of the paper tray cover with an extending paper support and flip-up stop.

At the top of the machine is a fold-open feed tray for the scanner’s 25-sheet Automatic Document Feeder (ADF) and this is a very low-profile unit, adding only a couple of centimetres to its height.

In front of the scanner is what looks vaguely like an iPhone, laid on its side. While it does have a touchscreen and dedicated touch buttons down either side, it’s functions are limited and its touch action is not very sensitive. It supports gestures, but you have to press quite hard for it to recognise virtual button presses. 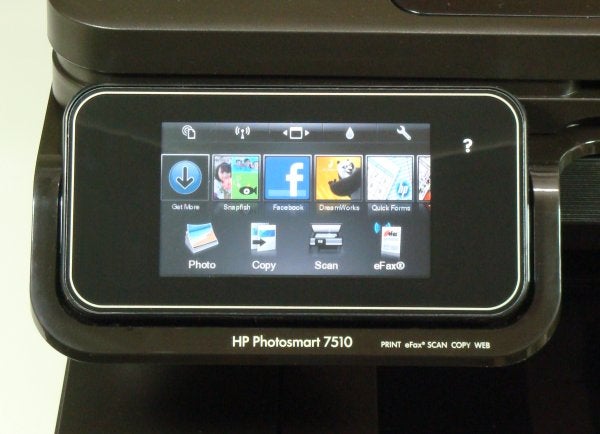 There’s a single USB socket at the back, but the printer also offers wireless connection and with WPS setup it’s only a few button presses to connect. This is the better way to do things, as in addition to HP’s ePrint facility, the machine supports Apple’s Airprint for easy transfer of documents from iPhone, iPod and iPad. You can also send faxes wirelessly this way, using eFax, without needing a phone line. The first 20 incoming and outgoing faxes each month are free.

Hinge up the whole of the upper section of the machine and the head carrier slides to the centre of the carriage to present its five ink cartridges. These include two blacks, with a higher capacity cartridge of pigmented ink to handle text.

Supplied software is HP’s normal bundle, including PhotoCreations, Solutions Center and Smart Web Printing, but there are also downloadable apps for pre-designed forms and access to your Facebook photos, among many other things.

HP rates the Photosmart 7510 at 13.5ppm for black print and 9ppm for colour, both respectable speeds if they’re realised. Under test, though, we saw 6.7ppm on the five-page black print test, rising to 10.7ppm on the 20-page one. Print duplex pages, and the speed drops back to 4 sides per minute, as there are noticeable waits for ink drying between sides.

Our black text and colour graphics print produced 4.6ppm, only about half the rated figure, though a single page copy completed in 19s. Photos printed quickly, with a 15 x 10cm image coming through at between 45s and 1:05, depending on source.

When printing duplex, the machine appears to use different inks for front and back sides of pages and to automatically reduce the size of page images, though not by as much as Kodak Heroes do. We can understand that duplex engines may need large page margins, but still feel the driver software should let you know. 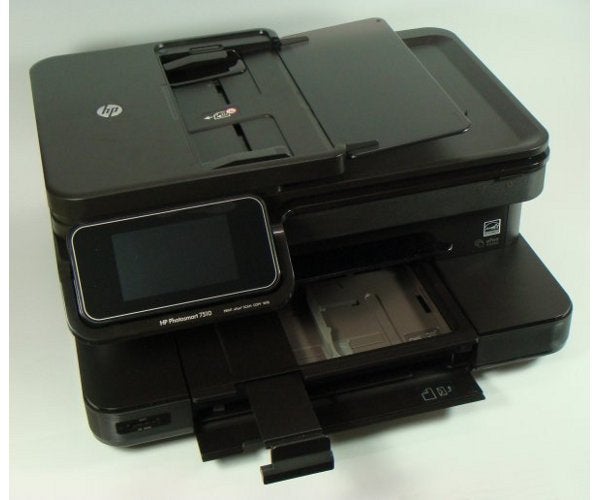 Black text print is clean and well formed and draft mode is still very workable, though with some jitters, due to misalignment of successive head passes. Colour graphics are well reproduced, though colours are perhaps not as lively as from some rivals. The colours in our colour copy were particularly close to those in an original and our photo prints were sharp and with good colour, though with some loss of definition in darker areas.

Print is unusually quiet for a fairly fast inkjet machine, peaking at 61dBA during paper feed. 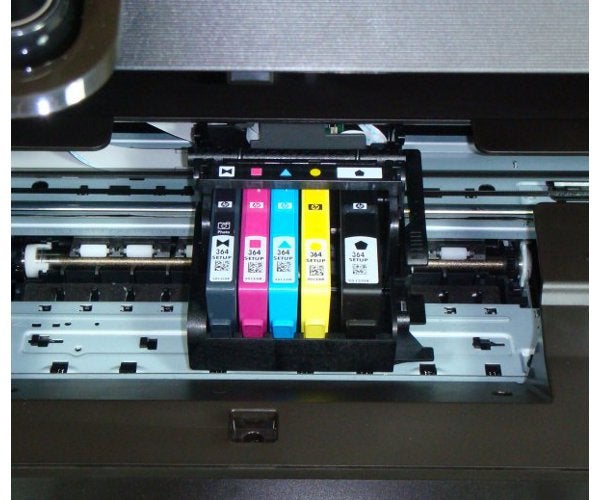 This machine shares the same HP 364 cartridges as the https://www.trustedreviews.com/hp-photosmart-5510_Printer_review HP Photosmart 5510, with standard and extra large yield versions available. Running costs are therefore the same, with an ISO black page cost of 2.9p and a colour one of 7.3p. Both of these are competitive with most of the machine’s likely competition, other than Kodak machines.

Verdict
The HP Photosmart 7510 has a novel design, but also a very useful feature set, with duplex print, twin paper trays, wireless connection and both ePrint and Airprint to make it particularly easy to print from. Running costs are good and print quality only drops slightly in comparison with some earlier HP models. Print speeds aren’t all that HP believes, but this machine is still good value at the price.