This is a low-cost, entry-level laptop aimed at first-time buyers or students, just like with the HP Pavilion 15-au072sa. However, it takes a slightly different tack, adding a touchscreen and a 360-degree hinge to turn it into a giant convertible laptop/tablet.

Along with this you get a higher-spec 1080p screen that uses IPS technology. That means it’s £80 more expensive than its sibling, but you get a considerably more versatile machine for your cash.

Although a convertible, this is still a fairly typical 15.6-inch laptop with dimensions of 23.9 x 382 x 250mm and a weight of 2.3kg. Certainly it’s hefty enough that you’ll want a rucksack to carry it around in, not a shoulder bag.

If you’re a fan of bold colour schemes, though, then the 15-au072sa should be right up your street. On the outside it’s all metallic red, while the interior has a great contrasting matte-black finish. 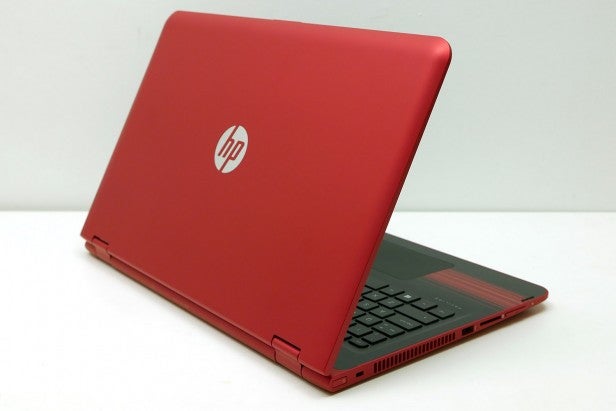 The act of flipping it around is made a bit more difficult than it should be, though. The screen is held against the keyboard by magnets, and although they’re not particularly powerful, it’s difficult to grip the two parts of the laptop to prize them apart because the edges of the casing are so rounded. And no, the little tab on the front edge of the screen section doesn’t help all that much.

Otherwise build quality is decent. The hinges hold the screen securely in place, no matter what position it’s set to, and there are no creaks or groans when you poke and prod the rest of the laptop.

Likewise the keyboard is more than acceptable. It doesn’t flex or wobble too much when typing, and the key action is nicely defined, so you’re always sure when you’ve pressed a key properly. The layout is also good, with plenty of space, and there’s even room for a numpad. However, like the HP 15-au072sa’s keyboard, the layout here is US-style, with some of the keys being slightly different shapes and in odd places compared to a normal UK keyboard. You’ll soon get used to it if it’s your only computer, but it could be a slight annoyance if you’re used to a proper UK layout. 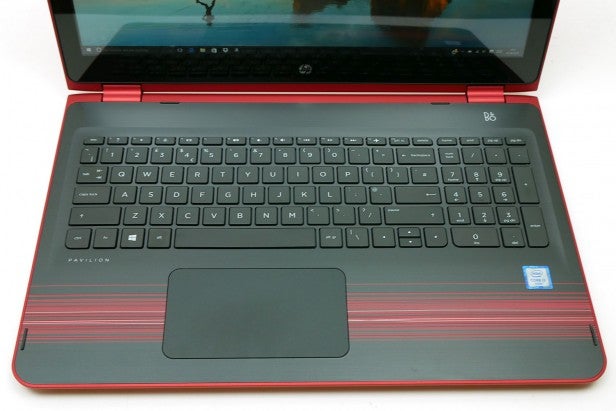 As for the trackpad, it’s also pretty good. It’s nice and large, your fingers glide easily across its surface and tracking is accurate. The single click-anywhere button takes a bit more effort than the best, but overall it’s still easy to use.

One thing you won’t find in its usual place alongside the keyboard and trackpad is the power button, which has been moved to the left side. This is so it’s still accessible when the screen is flipped around into tablet or tent mode. Likewise there’s a volume rocker here and a Windows button on the right edge. 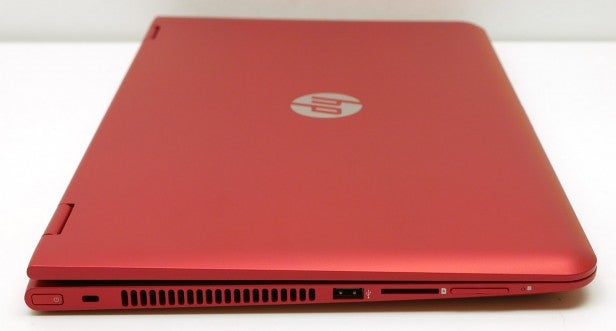 You do miss out on the DVD/RW drive of the 15-au072sa, though, so if you still use CDs and DVDs this isn’t the machine for you. Or you could just buy an external optical disc drive. Inside you get 802.11ac Wi-Fi and Bluetooth 4.2, so you’re all set for the latest wireless tech.

An Intel Core i3-6100U processor lies at the heart of the Pavilion x360, and it comes with Intel’s HD Graphics 520. It’s also joined by 8GB of RAM and a 1TB hard drive. That hard drive will feel slow compared to more typical convertible laptops that tend to use SSD storage, but for the price of this machine it’s to be expected.

HP has equipped the 15-bk062sa with a 1080p screen, so you get plenty of pixels making up a sharp-looking display. At that full resolution some may find text and icons look a little small, but you can use Windows’ scaling options to enlarge everything a bit.

It’s also an IPS LCD panel, rather than the cheaper TN type. That means it has much better image quality when viewed from an angle, as you can see in the images below. 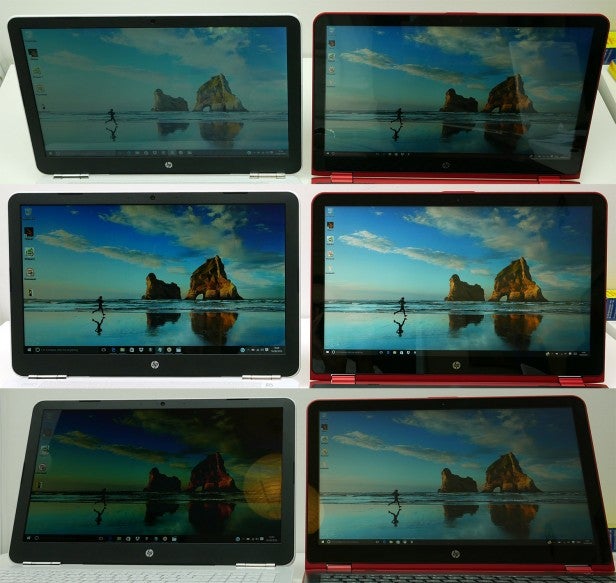 However, it’s not perfect. The main issue is the combination of a highly reflective glass touchscreen and the relatively low maximum brightness of 244nits. Many laptops offer up to 300-350nits, while something like the iPad – which also has to overcome a reflective touchscreen – pumps out 450nits.

Otherwise it’s a pretty decent display for the money. You get a great contrast ratio of 1,307:1, which means things like films and pictures are really brought to life, as you can see bright colours at the same time as deep, dark colours. Lesser displays can look grey and washed out. SRGB colour space coverage of 62.3% shows it certainly isn’t a display up there with the best, but to expect more for the money would be churlish.

However, I would hope for a bit more from this laptop’s speakers. They’re incredibly weak and tinny, and the B&O software enhancements can only do so much to squeeze a little more life out of them. Anything louder than whisper-quiet listening quickly becomes shrill and fatiguing.

Overall performance of this laptop is absolutely fine. The Intel Core i3-6100U rattles through any task you throw at it with ease, such that only those regularly doing heavy work like editing lots of pictures and cutting together videos will find they need more power. 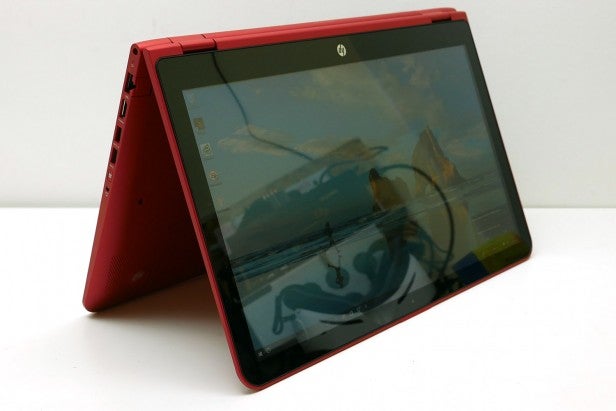 Interestingly, though, all these scores are actually slightly lower than the identically equipped 15-au072sa, suggesting HP has either tweaked the CPU’s settings or that the internal cooling is less effective, so the chip can’t squeeze out as much performance. You’ll hardly notice the difference in normal use, but it’s worth bearing in mind. That’s a sacrifice for having a convertible machine where there’s a little less room to fit in beefier cooling.

As hinted at earlier, the main sticking point when it comes to performance is the hard drive. It’s perfectly okay for a laptop hard drive, and 1TB is plenty of space, but if you’ve ever experienced the faster booting, speedier app-loading and general snappiness that an SSD brings then you’ll find it hard to go back to a hard drive.

For such a large and low-cost laptop, the 15-bk062sa has surprisingly good battery life. It lasted 7 hours and 23 minutes in our PowerMark test, where we loop 10 minutes of web browsing and 5 minutes of watching video, with Wi-Fi on and the screen brightness set to about 100-150nits (60-80%).

That’s just about enough for a working day, or a day of lectures, so you can potentially leave your charger at home. Plus, if you drop the screen brightness right down, you probably can get close to the company’s claimed 9 hours of battery life, though overall I’d say that’s rather ambitious. 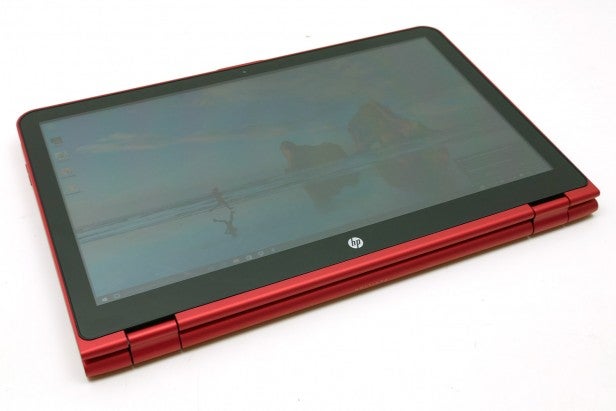 This is an intriguing laptop/tablet hybrid. Frankly, the appeal of such a large touchscreen device is rather lost on me, without there also being an included stylus, or something along those lines that actually makes the touchscreen useful. As it is, if feels like a glorified picture viewer. And without the touchscreen being useful, you’re much better off with a less reflective non-glass screen.

All that said, there’s little wrong with the way HP has put this device together. It looks quite smart, ergonomically it all works perfectly well, and you get good performance and battery life. The screen is also perfectly decent for the money.

As such, if you see the appeal of a flip-around touchscreen device and you’re on a budget, the 15-bk062sa is a decent buy.

Having a 15.6-inch touchscreen seems a little pointless, but this is otherwise a decent entry-level laptop.

This review unit was supplied by Currys