HP’s latest laptop is one of the new breed of hybrids designed to work as a notebook and a tablet. As its name suggests, the HP hits both form factors via a hinge that turns through 360°: the screen folds over and sits flush to the back panel in order to facilitate tablet use.

The red finish makes this one of the most visually exciting hybrids we’ve seen, and the £350 price makes it one of the cheapest, too: only the Asus Transformer Book T100 has been able to match this price, and the Lenovo IdeaPad Yoga 2 11 looks positively premium at £500. 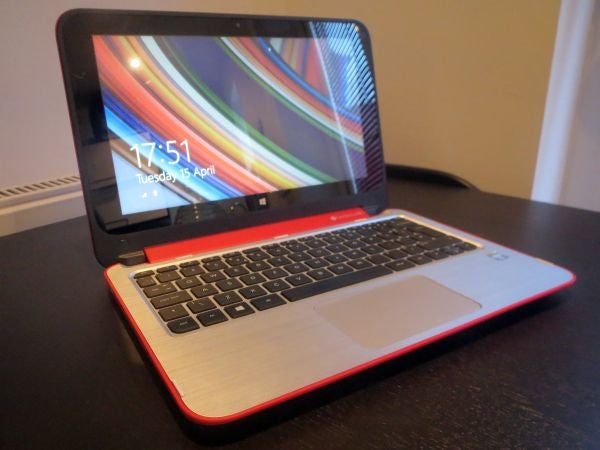 The low price doesn’t mean dreary design. The HP Pavilion x360 arrives with a striking shade of red across its lid, base and hinge, and the bright colour is split up by brushed aluminium around the keyboard and across the wrist-rest. Look a little closer and you’ll see that the HP’s matte red paint is flecked with subtle silver glitter. If that’s not for you, don’t worry: this machine also comes in silver.

Its lid is adorned with nothing more than a metallic HP logo, and the corners and edges are unfussy. The 11.6in screen is surrounded by the usual glossy black bezel. The Pavilion will attract attention thanks to its red exterior, but it’s not gaudy.

The HP’s flipping hinge is the same mechanism as on the Lenovo Yoga, and it’s just as easy to swing the screen round into tablet mode. The hinge feels just as sturdy, too, and the rest of the machine is put together well: a solid base and wrist-rest, and a screen with minor flex and no desktop distortion.

The Pavilion’s 1.4kg weight and 22mm thickness are impressive when stacked up against budget laptops, and they even compare well to many Ultrabooks. The HP’s two rivals mentioned above are slimmer and lighter, although not by much. 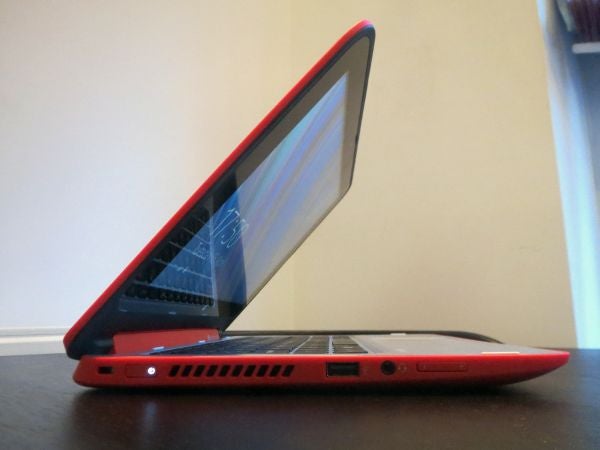 The HP isn’t as capable when stacked up against proper tablets – the kind of product that the Pavilion is designed to replace. Most Android and iOS devices are half the weight and thickness of the HP, and they will all still undercut the Pavilion when keyboard cases are added.

These aren’t just superficial complaints either: that poor tablet comparison impacts directly on day-to-day life. The Pavilion may flip into its tablet mode easily, but it’s an ergonomic disappointment: the 11.6in screen makes it wider than every other proper tablet, and its width and weight mean it’s too heavy for single-handed use. What’s more, the two sides of this machine don’t clasp together cleanly; one half is longer than the other, and it looks awkward. Like every other hybrid, the HP’s tablet mode is only worth using in two hands and, even then, it’s tricky. 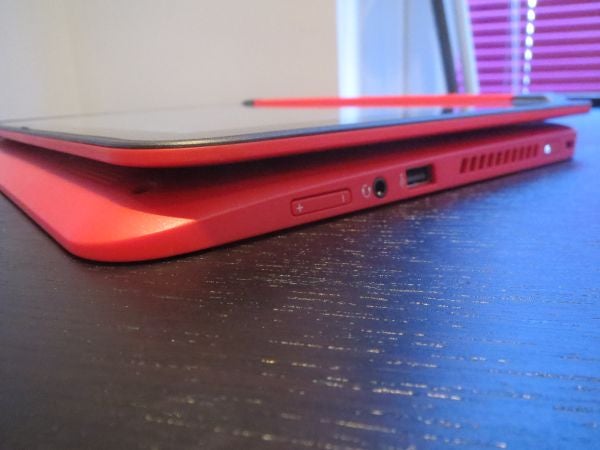 Nothing surprises about the HP’s connectivity: single-band 802.11n wireless, Gigabit Ethernet and Bluetooth 4.0. The ports are entirely underwhelming, too, with one USB 3.0 socket, two slower USB 2.0 ports, an HDMI output and an SD card reader – the bare minimum, even for a hybrid.

The 11.6in panel works well as a touchscreen thanks to an accurate, responsive surface, but the 1,366 x 768 resolution means immediate compromise. There are only just enough pixels to watch 720p films, let alone 1080p footage, and this makes it tricky to work on this machine too. The lack of desktop real estate makes some full-screen apps feel cramped, and it’s almost impossible to have two windows open side-by-side and still be effective. 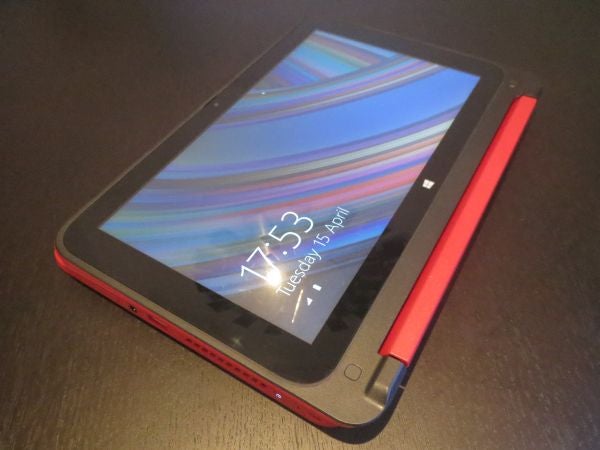 The quality levels, too, indicate that this is a screen only good enough for casual use. The HP’s colour accuracy is dreadful: the colour temperature of 7,294K is a long way off the 6,500K ideal, coming in looking far colder than it should. It’s paired with an average Delta E of 9.79, which means similarly poor colour accuracy. Both those results are significantly poorer than the Lenovo, and they mean the HP’s panel isn’t good enough for any sort of colour accurate work, such as even basic image editing.

That’s not the end of the Pavilion’s panel issues. The disappointing brightness level of 193cd/m2 means this screen fails to stand out from the crowd, and it’s paired with a pallid black level of 0.57cd/m2. The result is a contrast ratio of just 337:1 and a screen that’s washed out and insipid rather than varied and vibrant. Of greater concern, however, is the glossy finish and low brightness mean the screen is very hard to use in bright light. Reflections rule.

The Pavilion’s hinge proudly displays the Beats Audio logo, but there’s little to shout about when it comes to the speakers. The mid-range is the most dominant area, but its volume is hampered by tinny reproduction. The high-end is high-hats and little else, and there’s no real sign of the bass that made Beats famous – it’s present, but weak. We’d only use these speakers as a last resort.