What is the HP Pavilion Wave?

Most PC manufacturers haven’t exactly been very daring when it comes to desktop PCs, preferring square boxes to something with a bit more design flair. HP certainly can’t be accused of the same thing with the Pavilion Wave. With its triangular body, soft-touch cover and B&O Play audio, this computer looks and feels more like a high-end Bluetooth speaker.

While it can’t quite deliver on those audiophile looks, it’s one of the most innovative PCs TrustedReviews has seen in quite some time.

Hats off to HP for the Pavilion Wave’s design; it’s the most attractive desktop computer I’ve seen since the Mac Pro. The Wave’s small triangular frame (235 x 168 x 173mm) makes it easy to place on any desk. This is definitely the type of computer that you’d want to have on display. With the soft-touch material finish and the B&O logo on the front, there’s no doubting this PC’s audio focus. Mounted in the top of the PC is a single speaker that fires upwards into a parabolic reflector that shoots audio out at 360 degrees. 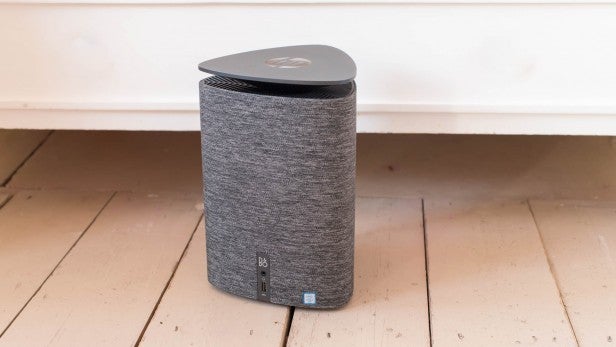 The Wave has an incredibly neat design that means there’s not a cluttered side to it. At the front, you get a single USB 3.0 port and headphone socket. Around the back, lined up vertically, are all of the other ports: SD card slot, USB 3.1 Type-C, two USB 3.0, DisplayPort, HDMI, Gigabit Ethernet (there’s 802.11ac Wi-Fi, too), power and a Kensington lock slot. 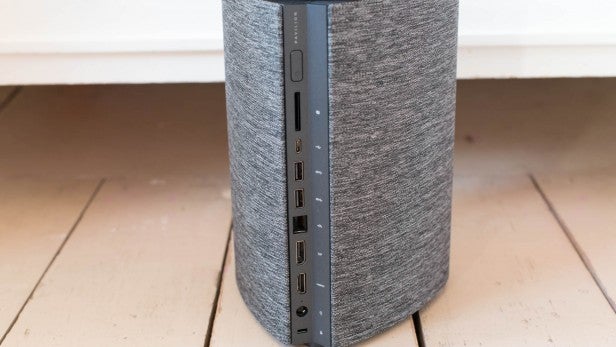 To save space inside, an external laptop-style power brick is supplied. This leaves the compact interior for the system components. Similar to the Mac Pro, the PC’s internals are mounted on either side of a triangle. One side contains the 1TB hard disk, while another contains the motherboard, RAM, CPU and SSD, and the third side houses the copper-pipe thermal system and fans. 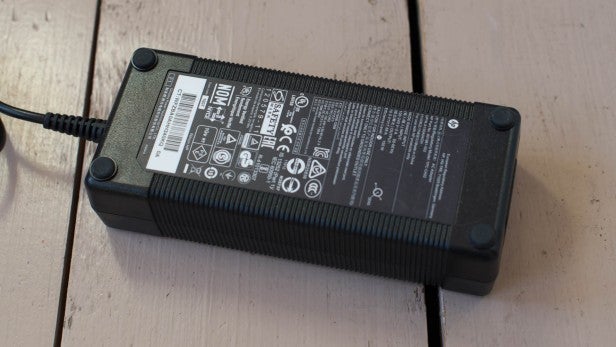 It’s a great bit of engineering, although there’s one downside: you can’t upgrade it. In fact, you can’t even get inside the case easily, and the HP Pavilion Wave isn’t designed to be user serviceable.

HP bundles a wireless keyboard and mouse with the Wave. Thankfully, there’s no need for a separate dongle, and the peripherals come pre-paired, so they’ll work straight away. The keyboard is the best part. With its integrated battery, you can simply charge it via its Micro USB cable, so you never have to worry about changing batteries again. 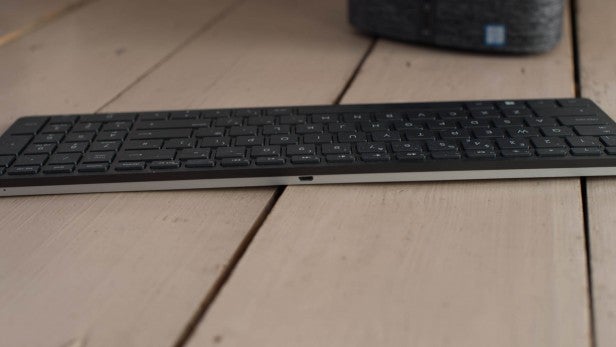 It’s not quite a full-size keyboard, ditching the Page Up, Page Down, Home and End keys to squeeze in a numeric keypad. The design mostly works, although there are a couple of annoying choices. I don’t like the reduced size of the Return key, as it made it too easy to hit the ‘#’ key by mistake. Likewise, shifting the ” key to the right of the spacebar slightly disorientated me. It’s not too bad getting used to this layout, but I’m firm believer that all keyboards should keep the same core layout, only moving the lesser-used keys.

The keys are a little soft, but thanks to decent travel and feedback, it’s easy to tell when a key press has been registered. I found that I had no problem typing at full speed. 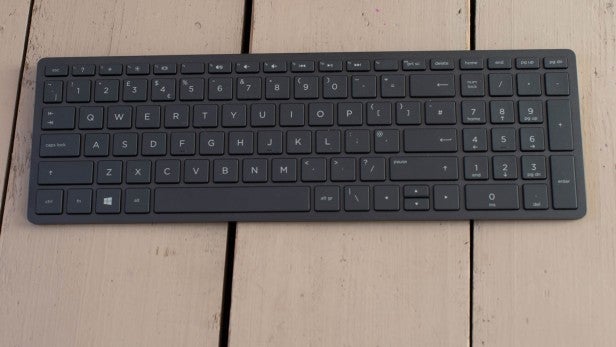 The mouse is much more basic and doesn’t have a rechargeable battery, running on two AAA cells instead. It’s relatively comfortable to hold and will suit lefties as well as right-handed people. But its buttons are very soft and not particularly responsive, and there’s just a scroll wheel and no back or forward buttons. That’s not really acceptable for a premium PC designed for getting things done. 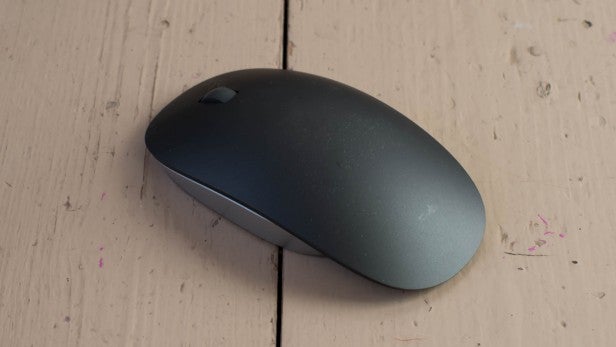 PC and laptop manufacturers often boast of the audio prowess of their systems, but the Wave is something of a rarity and actually delivers. A single mono speaker means that there’s no stereo separation, but you get a 360-degree field of sound that makes audio clear no matter where you’re sitting or standing. Bass is a little lacking, but the Wave is loud, clear and easy to listen to. This is the first PC that I’ve come across where I’d be happy to use its integrated speaker for films, TV and music.

Dual noise-cancelling microphones are built into the Wave’s body and did a great job picking up my voice. Combined with an external webcam, the Wave is perfect for video calls. 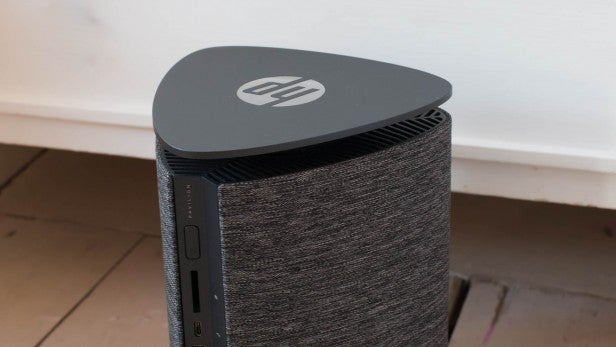 Combined with 8GB of RAM, this helped the Pavilion Wave manage a Geekbench Multi-core score of 7,937 and a PC Mark 8 Home score of 3,254. That makes the Wave faster than computers that use ultra-low-power CPUs, such as the Lenovo IdeaCentre AIO 510S. However, it’s around 28% slower than PCs with a full Core i5-6400 CPU.

Graphics are provided by the CPU’s integrated Intel HD 530 chip. Modern games beyond 720p and the lowest graphical settings are out of the question, but lighter titles will be fine. Minecraft managed consistent frame rates of around 60fps.

Cooling is efficient with this PC, and the Wave only ever generated a very low hum when it was turned on, even when the CPU was under full load. It’s not silent, though – you’ll need an Intel Xeon Mac Pro for that sort of performance.

Storage is provided via a 128GB nVME M.2 SSD and 1TB hard disk. This gives a good combination of storage space and performance. Measuring the SSD using CrystalDiskMark, I saw sequential read speeds of 1,576MB/s and write speeds of 677.4MB/s. The result is a PC that boots quickly and feels responsive. As both drives appear separately, it’s worth moving documents and large program installations to the mechanical disk.

Should I buy the HP Pavilion Wave?

Whether or not the HP Pavilion Wave is the PC for you or not comes down to what you want from a computer. There’s no doubting that if you opt for a standard PC design, you can get a computer that’s faster for less money. Alternatively, if you buy a regular all-in-one, you can get a PC with a similar spec and a display for not much more. 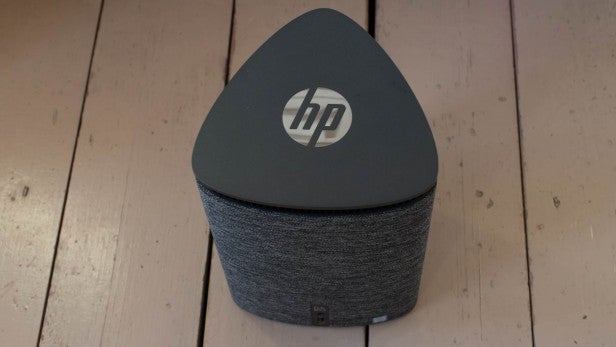 But there’s something to be said for doing things differently, and the HP Pavilion Wave is the most attractive desktop PC that I have seen in a long time. With its excellent integrated speaker, brilliant design and smart mix of components, the Wave is a computer that I’d be happy to have on my desk.

A gorgeous-looking PC with great sound, the HP Pavilion Wave does something different, and does it well.