The HP Pavilion Touchsmart Sleekbook 15-b129ea (a name that does not exactly roll off the tongue) doesn’t get unusually hot at any points, but can get a little loud when the fans kick in. The chances are if it gets to the temperature where the fans do spin into life, you’ll be doing something with sound anyway (gaming or watching a video), because day to day word processing and internet browsing don’t trigger any additional cooling. 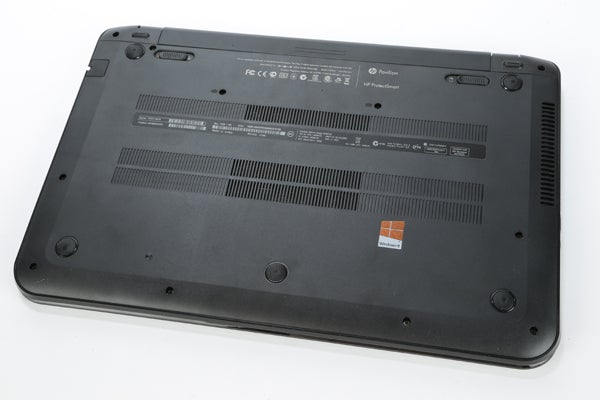 The big advantage of a 15.6-inch laptop is that you get all the keys you’d find on a full size desktop keyboard, and sure enough everything is present here, including a row of function keys along the top, and a full number pad to the right. In keeping with the curved design aesthetics, the keys at the corner of the keyboard have nicely rounded edges. The key spacing took a little getting used to, but we found typing on the Sleekbook to be quick and responsive. One minor issue with the keyboard is that to save space HP have made the up and down arrow keys the same size as a single key while the left and right arrows are normal sized.

The thinness of the laptop means that the keys themselves don’t protrude very far from the base – around a millimeter in height, but this didn’t have any noticeable impact on our typing speeds. 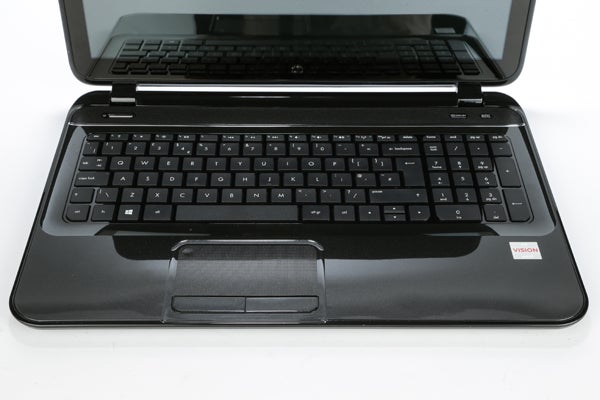 We didn’t take as much of a shine to the Sleekbook’s touchpad, sadly. Although it allows gestures such as two fingered scrolling, we found the precision required to pull it off made it an inconsistent experience, and the slightly bumped surface of it was less pleasant to use than the smooth variety.

On top of this, the two mouse buttons placed directly underneath it feel quite plasticky, and are a touch on the stiff side. We found the alternative of tapping the touchpad preferable and responsive enough to replace it, but needed to fall back on the buttons when right-clicking.

Unfortunately, the battery life of the Sleekbook is a little disappointing. A combination of the large screen and slim design means that the included 4-cell Li-lon battery gave us a modest four hours and 10 minutes in our benchmarking tests, meaning that being away from a power outlet for any length of time will be a problem.

Charging speed was moderate, with the battery regaining 32% of its battery bar from a 30 minute charge while turned off – or roughly one hour and 15 minutes of additional usage.

The Sleekbook does come with a built in webcam for Skype chat, labelled “HP TrueVision HD”. Using Windows 8’s built in camera mode, we discovered this to max out at 0.9-megapixel, resulting in the kind of grainy image you expect from a webcam. Perfectly fine for video calls, but the label had us expecting a little bit more. 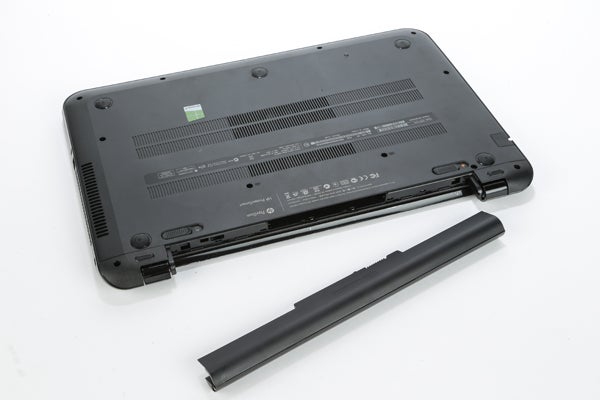 The HP Pavilion Touchsmart 15-b129ea Sleekbook is sold as a cheap and cheerful 15.6-inch touchscreen laptop, and from a distance it certainly looks like it belongs in a higher price bracket with its stylish thin design. When put through its paces though, the points of cost saving become pretty starkly apparent: the screen isn’t particularly sharp or bright, it can be pretty sluggish in its day to day usage, there’s no DVD drive, and the battery capacity is so-so at just over four hours.

If you absolutely must have a 15.6-inch laptop with a touch-screen interface, then you will struggle to find something in a similar price range (though our slight preference goes to the Acer Aspire Touch V5, if you can spend a little more due to it feeling slightly more speedy). If you’re prepared to sacrifice some screen real estate, then we loved the Acer Vivobook when we reviewed it last year, and its 14-inch brother is now available at a price not too much more than the RRP here.

A nice looking and competently performing budget touchscreen 15.6-inch laptop with some obvious cost savings, but there are better options out there in a similar price bracket.