With a retail price of £430, this 15.6-inch touchscreen Windows 8 laptop is aimed at the high end of the budget market. Targeted at consumers who want the features and screen estate of a more expensive model on a budget, the ideal user could be a student looking for home and occasional mobile use, but anyone looking to get a 15.6-inch touchscreen on a budget will find beating this price difficult.

It’s less than an inch thick, and while it is portable its 2.1kg weight means that this HP Sleekbook is probably not ideal for someone who wants to do most of their work away from a power-outlet. 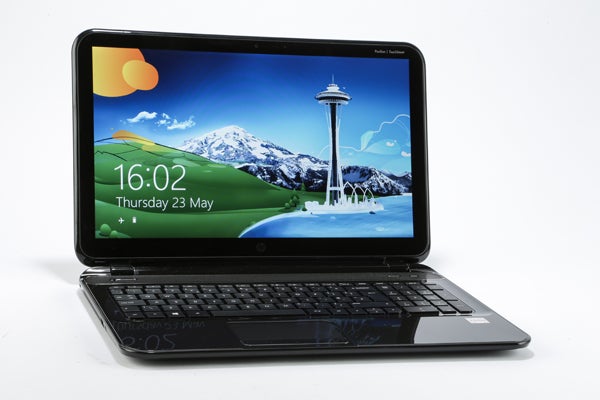 Unsurprisingly given its name, the Sleekbook doesn’t look like a budget laptop from a distance. While the sparkling black glossy finish won’t be to everybody’s tastes, it is certainly eye-catching, albeit something of a fingerprint magnet. The curved corners are on both the screen and the body, and there’s a slim gap between them when it’s opened up, leaving just the hinges to connect the two. Despite this, the screen feels secure and firm, and isn’t in any way flimsy. When closed, the whole thing is under an inch thick, which means that although it’s packing over two kilograms of weight, it is at least about as compact as a 15.6-inch laptop could be.

In terms of connectivity, the Sleekbook is generally well catered for, and includes a generous three USB ports. Alongside these, it has an HDMI port, an SD card reader, an ethernet port, a headphone jack and of course the AC point. Conspicuous by its absence is any kind of DVD or Blu Ray drive, presumably a casualty of getting it to a svelte 0.8 inches thick. 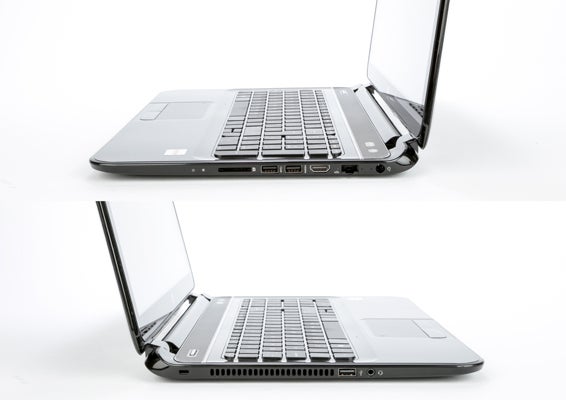 On day to day tasks, we found the Touchsmart Sleekbook to be on the sluggish side. Rebooting times were pushing 50 seconds thanks to the lack of solid state drive (though from cold it booted up in less than 10 seconds thanks to Windows 8), and it occasionally had jarring moments of pausing before text appears in a way we tend not to find with similarly specced machines.

Unfortunately HP has also seen fit to include plenty of additional bloatware to the Windows 8 experience, and the desktop mode includes shortcuts to Snapfish, eBay and Connected Music group, as well as HP Games, Norton Internet Security and HP Support Assistant. While it’s doubtful that these slow the PC down significantly (other than at boot) it certainly takes away from the pure Windows 8 experience. On the bright side, it coped with 1080p YouTube videos without any stuttering or problems, so it handles casual tasks well.

Results from our gaming tests were underwhelming, and in short you’ll be looking elsewhere if you want to play the latest big releases. Our STALKER Call of Pripyat benchmark clocked in an average of 15.3 FPS on medium detail in 1366×768. Trackmania Nations fared better and was comfortably playable with 44.3 FPS on similar settings, but it’s clear that this isn’t a laptop for those with an eye on Steam’s upcoming blockbuster releases. 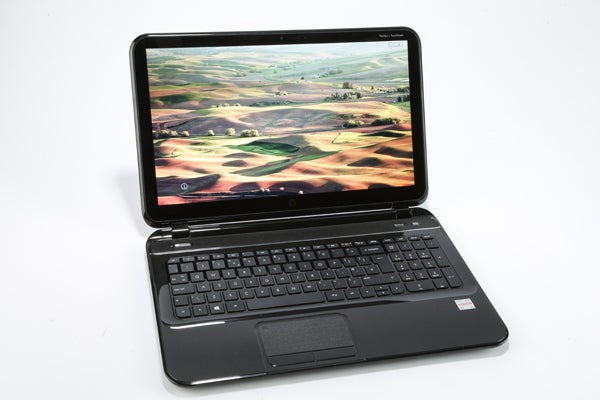 The screen is disappointing too, with a real lack of sharpness on icons and text, and colours appearing a little washed out and dull. Viewing angles are okay but unspectacular, as viewing from an angle tends to make shimmering reflections too distracting to be usable. Even at top brightness (a shortcut handily placed on the F keys), it’s not all that bright either. This isn’t really an issue as if you’re not going to be using the Sleekbook much in direct sunlight, but it does add in to the general feel that a lot of the low cost has been absorbed by the screen.

That said, HP has to be applauded for packing a 10 point multi-touch touchscreen into a laptop in this price-range, but it has clearly come at a cost. It’s also questionable how much people want a touch interface on a laptop, where the keyboard and trackpad still work well. Touch is good for navigating the Windows 8 start screen, but as you’d expect it can get a bit fiddly in desktop mode, although the generous proportions of the 15.6-inch screen actually make it less fiddly than smaller Windows 8 tablets.

Used as our main laptop for the review period
Tested for at least a week
Used consistent benchmarks for fair comparisons with other laptops
Reviewed using respected industry benchmarks and real world use
Next
HP Pavilion Touchsmart Sleekbook 15-b129ea – keyboard, battery life and verdict Review