If you’re a casual user of PCs – someone that just browses the web, sends a few emails, listens to music and watches the the odd video – buying a PC can be a complete minefield. On the one hand you don’t want to spend more than you need and on the other you don’t want to be stuck with a complete melon. And, god forbid, you might even want something that looks quite nice too.


Of course, there are plenty of systems to be had for very little money but they tend to fall short in the looks department or they include unnecessary extras like speakers and TV tuners. For some reason few companies seem to get it quite right. However, HP is hoping to change all that with its latest slim and sleek line, the Pavilion S3000. 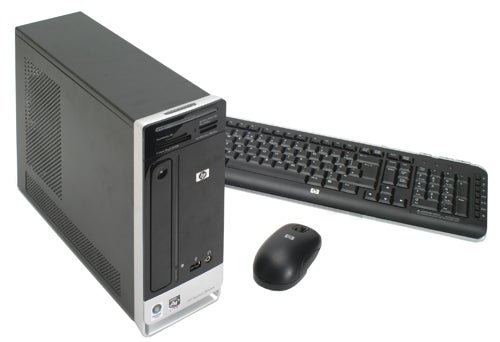 The S3000 is aimed squarely at the home user who wants a computer with enough horsepower for all those normal tasks but with none of the extra frills and, perhaps most importantly, that they’d be happy to have sitting proudly on their desk.


The model range is split up into two lines, one using Intel CPUs and chipsets and the other using AMD CPUs and nVidia chipsets. Each range offers a cheaper single core version (around £350) and a more expensive dual-core version which also has more RAM, a larger hard drive and better graphics. Whether you choose AMD or Intel I’d always recommend forking out the extra for the dual-core version as that extra core makes a huge difference even for the lowly tasks that most of us perform.


The particular model I’m looking at today, the S3040, uses AMDs dual-core Athlon 64 X2 3800+, and comes with 2GB memory, a 320GB hard drive, nVidia GeForce 7300 LE graphics, and a multi-format CD/DVD rewriter drive with LightScribe technology – this allows you to flip the disc over when it’s done burning and etch your own custom label. Coming in at £475 for the lot, it isn’t the cheapest computer on the market but it more than makes up for it in style and performance. 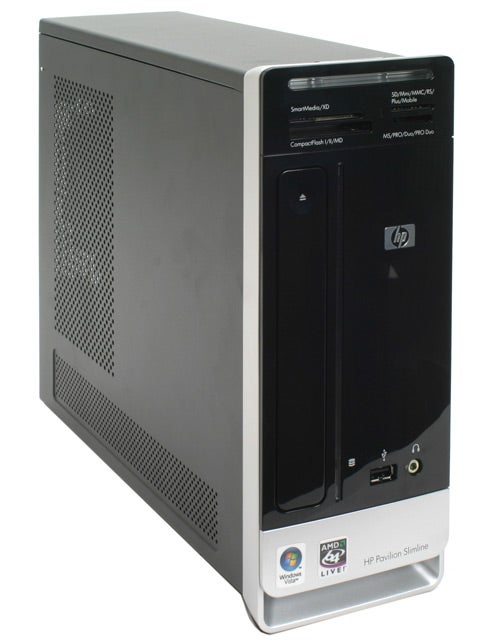 Measuring just 27.5cm high, 11cm across, and 33.5cm deep, the S3000 series chassis is among the smallest we’ve seen for a fully featured PC, and, once you’ve taken the stickers off, it’s got to be one of the best looking as well.


The subtle tilt imparted by the extended fascia lifting the front of the PC off the desk is one of those design elements that at first you don’t notice but you later realise lends a lot to the overall appeal. The actual purpose of leaving a gap underneath the case is to enable air to flow under it and into the ventilation mesh on the underside. It’s this clever doubling up of form and function that is evident throughout the case and, in particular, continues on the front of the fascia.

Embedded in the thin strip of clear plastic that runs alongside the door hiding the CD/DVD drive is an LED that flashes on and off with hard disk activity. All seems like standard stuff so far? Well, the clever bit is just how the strip is positioned. By setting it just above the CD/DVD drive activity light it allows the light from this LED to shine through to the front of the case without interupting the front panel. Again, it’s a subtle detail but it all adds up to a better whole. 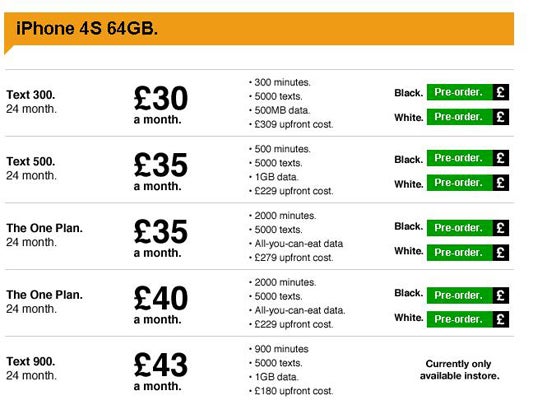 The same technique has been used on the power button that sits in the top edge of the fascia and lights up a pleasant shade of turquoise when the PC is on and turns to orange when in standby. By adding another strip of clear plastic to the front of the fascia you can see the light from the power button above shining through. This means you can easily see if the computer is on whether you have it on your desk or on your floor.


There is one part that lets the design of the front down and that’s the multi-format card reader that’s integrated into the top. Not only are all the different shaped holes a bit of a mess but the writing, that indicates what type of card each slot can take, totally interrupts the otherwise minimalist look. Unfortunately it’s rather essential as even I forget which slot is for which card sometimes. Maybe they could have been hidden behind a small door along with the USB and headphone connections which would have made the whole thing look even better. One can only assume space limitations restricted that option. 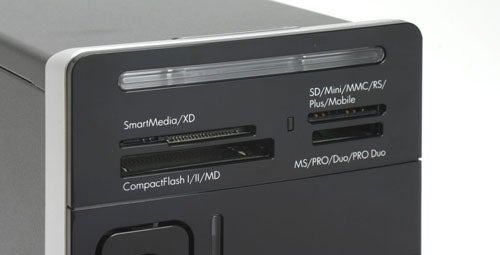 The actual materials used to make the case are nothing special with the whole front panel made of plastic and the body made from steel. So, the case is never going to compete, in terms of looks and build quality, with the super sleek brushed aluminium wonders from the likes of Lian-Li and Silverstone but considering the budget HP would have been working to there’s definetly some kudos owed to the designers of the S3000. 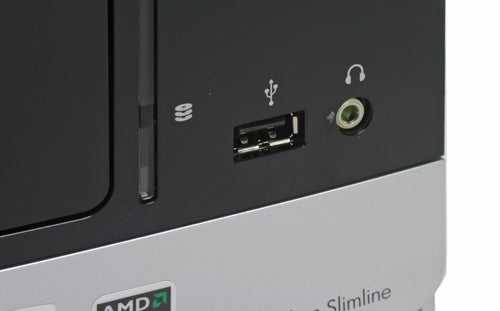 As hinted at above, the front houses only one USB port and doesn’t include a microphone input or Firewire. As it is almost ubuiquitous to have two USB ports, one FireWire, and headphone and microphone inputs on the front of PC cases nowadays it seems the S3000 is rather lacking in this department. However, I guess few people really use the microphone socket, and if you do need more USB ports, there are plenty round the back.

Joining the four extra USB ports on the back panel are one FireWire socket, two PS2 ports for keyboard and mouse, a Fast Ethernet port, an S/PDIF digital audio socket, and six sockets for analog audio line in/out and 7.1 surround sound. All the ports and sockets are clearly labelled and colour coded so even a complete novice shouldn’t have a problem putting one of these together. 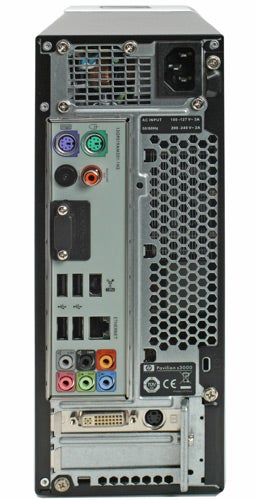 Graphics come courtesy of a low profile add-in card that has one DVI output and an analog S-Video out socket. The DVI port isn’t dual-link so it won’t support ultra high resolution displays like the 30in HP LP3065 but if you are going to spend nearly £1,000 on a monitor you should probably be planning to spend more than £475 on a computer.


The graphics card ticks enough feature boxes to enable playing most current games (though it doesn’t have DirectX 10 support) but you’ll have to drop to very low resolutions in order to do this. Quickly firing up Call of Duty 2, the GeForce 7300 LE was only able to keep up when I turned the resolution down to 640 x 480, with no anti-aliasing, and with all the in-game settings to medium or low. Also, the fan on the graphics card is a tiny thing that spins very fast and creates a distinctly audible hum. I cannot see the logic behind the decision to use such a poor cooler, there are plenty of decent coolers out there and it really does mar an otherwise unobtrusive PC. 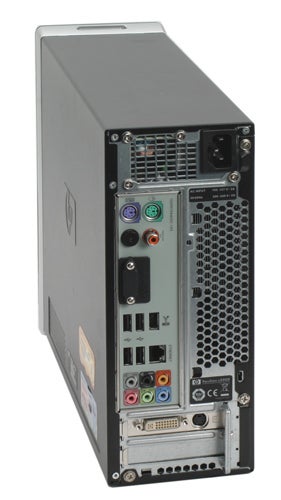 So the S3000 isn’t a gaming powerhouse, but it was never meant to be. Putting it through its paces with our usual set of 2D productivity tests, it proves more than capable and under general use it feels fast and responsive. PCMark 05 returned a reasonable overall score of 3563 though the graphics score is understandably low. The key thing is the combination of a dual-core CPU with a decent quota of 2GB RAM that ensures you should never grind to a halt.


Due to the cramped case and use of small low capacity fans the system does run quite hot but so long as you don’t block the air intakes and exhausts you shouldn’t have any problems.

Unsurprisingly our regular complaint of pointless software being loaded onto shop bought PCs once again rears its ugly head. While some of it is useful – you get Adobe Reader, Norton Internet Security (with 60 days of updates) and Roxio Media Creator Basic – some of it is frivolous to the point of bewilderment. Who on earth needs little icons in the system tray to tell you when the Num/Caps/Scroll lock buttons are depressed – that’s what the lights on the keyboard are for!


The PC ships with a PS2 keyboard and mouse which are fine for general use, though I would prefer to see them connected by USB. The keyboard has a number of shortcut keys around its edge that enable you to control system volume, send the PC into sleep mode, open your Internet browser, control media player, etc. Its keys are semi-low-profile (a bit like a notebook) so they can take a bit of getting used to but a few hours’ practice soon had me going at full pace. 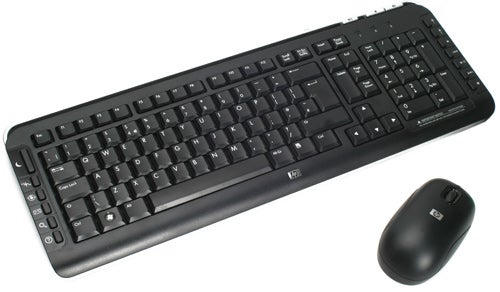 The mouse uses an optical sensor which is good to see on a budget system as some systems still come with infernal ball mice. It only has the standard three buttons and a scroll wheel but it is enough for most people – I personally can’t live without forward and back buttons on a mouse. It is quite comfortable in the hand but isn’t the smoothest moving it across surfaces.


Standard warranty is one year return to base which covers parts and labour, though John Lewis is currently offering an extra year’s cover and delivery for free.


HP is actually producing a range of products that are styled in the same way as the S3000 and we currently have one of its monitors in our office awaiting review. It’s the HP w2207 22in widescreen LCD and it makes for the perfect match to the system I’m looking at today. The review will be done very soon but for the time being I’ll leave you with this picture. 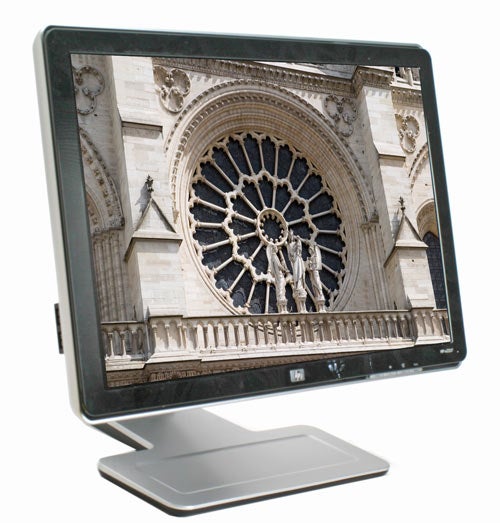 
The HP Pavilion S3000 is a stylish and fast computer that is just right for the small office or living room. There are cheaper deals to be had from the likes of Dell, Evesham, Mesh, and indeed HP but you will get a large boring case that’s mostly filled with air. If you’re into gaming this may be what you want, as you can add in a better graphics card at a later date, but otherwise the S3000 gives you all you need.


When you consider just the case for a small form factor PC like a Shuttle can cost up to £300 the value of a small powerful machine like this becomes very apparent.