Here at TrustedReviews we’re always keen to see truly interesting products. So, when this 20.1in behemoth first came to our attention back in May, suffice to say it piqued our curiosity. Back then it was rumoured to be a foray into the gaming space, however those claims proved to be erroneous and the end result is a large and unusually designed desktop replacement with a focus on entertainment and multimedia. 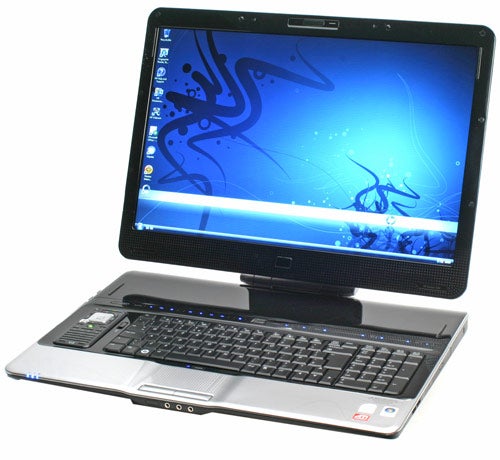 Indeed, it’s the unusual design that first attracts and HP’s design teams have certainly been earning their pay packets of late, consistently creating eye-catching, contemporary and classy consumer desktops and notebooks. The HDX is just another example of this, with the large 7.05kg chassis made to look surprisingly elegant thanks to the combination of some pleasing lines and the glossy black/silver finish. On the outside there’s also a elegent “Dragon” inspired imprint design, a feature we previously saw with the HP Pavilion dv2560ea.


The first thing you’ll probably notice, however, is the screen and its unusual hinge – or rather its two hinges, since that’s what it has got. One is a normal hinge attached to the base, while the other pivots from the middle of the screen. It’s an ingenious idea and, importantly, it’s one that’s been carried out to near perfection. 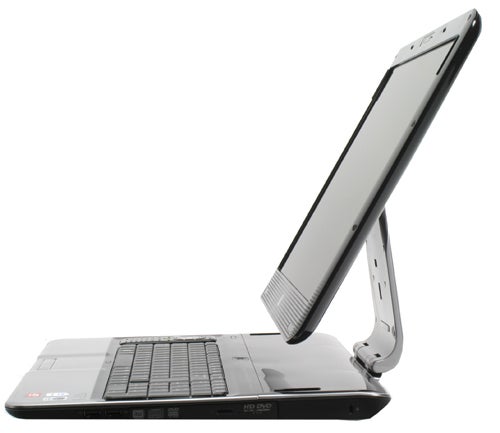 When opening the lid the screen stays firmly fixed into place until it reaches the limit of the first hinge and only then does the second hinge unlock, enabling you to move the screen into position. This may sound rather mundane in words alone but believe me it feels beautifully engineered, with the second hinge helping to create a far more natural and comfortable viewing position.


As a result sitting in front of the HDX feels far more like sitting in front of a desktop monitor, which given its status as a desktop replacement is no bad thing. Obviously the physical size helps in this regard too, with the 20.1 display sporting a 1,680x x 1,050 native resolution, just like desktop display. This is no coincidence, since the LCD panel used in the HDX is without doubt a desktop monitor panel rather than one designed for a notebook. 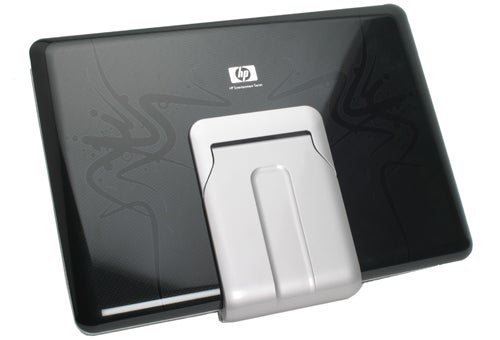 This isn’t a problem in and of itself since it’s a pretty good panel, producing nice colours, good contrast levels and smooth motion. However, with the HDX coming equipped with an HD DVD drive, the native resolution sits uncomfortably between 720p (1,280 x 720) and the full fat 1080p. When you consider that notebooks such as Qosmio G40-10E are shipping with, albeit smaller, 1,920 x 1,200 displays, the 1,680 x 1,050 of the HDX seems underwhelming. It’s a topic that’s generated a considerable amount of argument in the office, with some considering it a major problem while others accepting the compromise. It’s an issue I’ll be revisiting later on, but until then let’s take a closer look at the chassis as a whole.

Elsewhere on the HDX, there are plenty of nice touches. Take the trackpad, which is neatly integrated into the surface of the notebook and outlined by small dimples and a slight dip downward. It’s a lovely aesthetic touch and it’s great to use too, as is the media remote that’s housed in the chassis to the left of the keyboard. 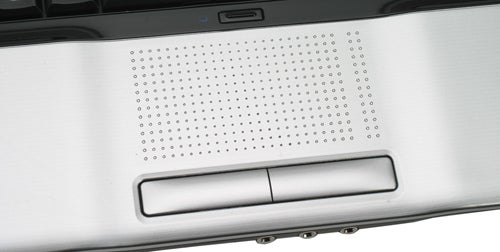 If the remote doesn’t suit your needs there’s what HP call the ‘Media Console’, the general name for the collection of touch sensitive media controls just above the keyboard. These cover pretty much everything you’re likely to need, including shortcuts to HP’s QuickPlay media software, playback controls, volume control and even Bass and Treble level control too. There’s even a Fingerprint reader, which is always a welcome addition.


Digging a little deeper, the HDX9095EA is powered by an Intel Core 2 Duo T7500, which has a clock speed of 2.2GHz, 4MB L2 Cache and an 800MHz front-side bus. This is backed up by the obligatory 2GB 667MHz DDR2 RAM, while storage totals 400GB thanks to two 4200rpm 200GB SATA drives. In truth it would be nice to see faster drives in there, but you’re getting plenty of space so it’s an acceptable trade off. 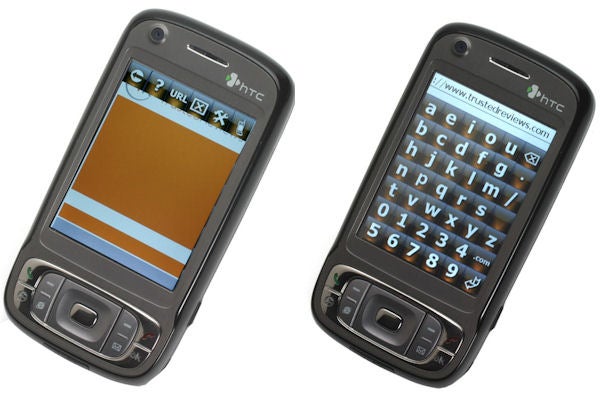 As mentioned previously there’s an HD DVD drive too, though there’s no recording ability as on the Qosmio. As such, you’ll have to settle for dual-layer DVD+/-RW capability and that should suffice for most people’s needs. Adding to the multimedia credentials is a Hybrid DVB-T and Analogue TV Tuner, while predictably there’s an HDMI port on hand for hooking this all up to your TV. Network connectivity is good, though not perfect. There’s no Gigabit Ethernet, just 10/100, however Intel 4965AGN Draft-N Wi-Fi does make it, as does Bluetooth 2.0 with EDR (Enhanced Data Rate).


Graphics come courtesy of an ATI Mobility Radeon HD 2600 XT, with 256MB of dedicated video memory to call on. This is a DX10 card, though it’s a mid-range part so don’t go expecting gut busting performance – compromises are required. Still, in this regard the 1,680 x 1,050 native resolution is quite forgiving, so you’ll be able to push the effects further than with a 1,920 x 1,200 display. 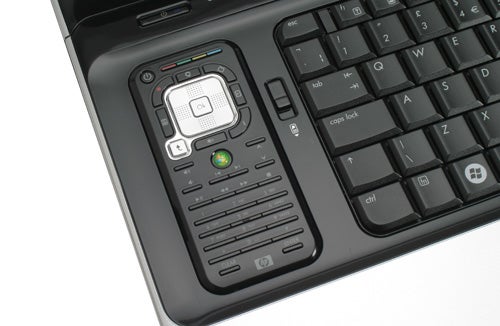 Other features include a 1.3 Megapixel camera, which sits just above the display and is flanked by integrated microphones either side. Praise must also be reserved for the integrated speakers, with four front facing drivers and a Bass Reflex Subwoofer underneath the notebook. Though not quite as good as those on the Qosmio they’re nonetheless above average, producing decent highs and lows, a warm mid-range and a convincing soundscape. If there’s a criticism to be made it’s the lack of Dolby Home Theatre, which was featured in the Qosmio and is quite an attractive suite of technologies for a notebook with multimedia pretensions.

Connectivity, however, can’t be faulted. Starting on the back you’ll find 3.5mm audio inputs and outputs, with an RF input for the TV Tuner and an S-Video output to accompany it. There are also separate audio connections, enabling you to connect side, rear, sub and front speakers directly to the notebook.

Then, on the left, there’s a large assortment of connections with two USB ports, an Ethernet port, an expansion port for HP’s own docking solutions, D-Sub, HDMI, e-SATA and a 4-pin FireWire port. Following this is a 5-in-1 memory card reader, which supports SD, MMC, Memory Stick/MS Pro and xD formats as well as a 54mm ExpressCard slot.

On the front there are further audio connections for easy access, with a Mic input, two headphone outputs and an IR receiver for the remote. Moving to right side, there are a further two USB ports with the rest of the space taken up by the HD DVD drive. For the security conscious there’s also a lock slot, which is situated toward the back.

Looking at the pre-installed software, HP has struck a nice balance between adding value without turning the system into bloatware city. As standard you get Works 8.0, as well as all the usual bits and pieces you get with Windows Vista Home Premium, including Media Center.

For DVD authoring you get the Roxio Creator Suite and HP includes its own selection of programs, including the surprisingly decent QuickPlay software, which gives you quick access to various features such as HD DVD playback and even your favourite games. There’s also a trial version of Norton Internet Security, though you could easily opt for any number of the free solutions out there such as AVG or Avast.

For performance testing we had to alter our usual testing due to the system refusing to run PC Mark 05, due probably to some unidentified software conflict. However, we encountered no such problems with our own 2D benchmarks, while we also ran some gaming benchmarks at the native resolution to gauge gaming ability.


Given the generous specification of this model the 2D performance was excellent. It zipped briskly through both the Photoshop Elements and VirtualDub tests, while in general use it was snappy and dealt easily with juggling multiple tasks. Playing high definition video content was also near faultless, with no significant problems with dropped frames or tearing.

Moving onto gaming, it should be taken as a given that you won’t be able to run more recent games at highest settings, however, in general, performance is strong enough. At the 1,680 x 1,050 native resolution the HD9095EA managed solid frame rates in both Counter-Strike: Source and Call of Duty 2, with anti-aliasing enabled with detail and textures set to their highest. This is a pretty good effort and, though neither of those games are DX10 capable, experience shows you will be able to play DX10 games so long as you’re willing to make some compromises on detail and effects.


Overall, then, performance is excellent and can genuinely be considered to be of desktop replacement quality. Clearly, though, this doesn’t come cheap and in many respects the HDX is an acquired taste in terms of its size. However, for the price, you’re getting good performance, features and superb design, the latter of which is a rare and valuable commodity. Many a notebook will deliver similar performance and features at a lower price, but they’ll be little more than a disappointing generic slab of plastic. With the HDX, you’ll never experience that pang of regret. 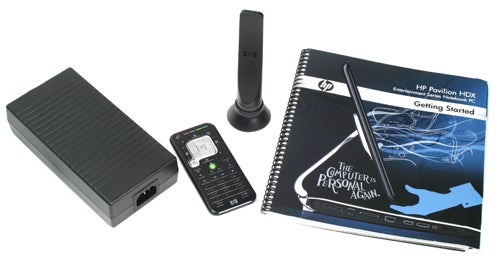 Indeed, the only regret you’re likely to have is one that I touched upon earlier; namely, the lack of a 1080p capable display. For some this may prove a deal breaker, however it’s the single serious criticism you can make and overall the HDX is practically without peer. Ultimately, it comes down to a matter of degrees and how important this aspect of the machine is to you.


If it is very important then you’ll want to consider the likes of Toshiba’s Qosmio, which is smaller but features a 1,920 x 1,200 display and adds Dolby Home Theatre support into the mix too, though it can’t match the HDX in terms of ingenuity or ease of use. It’s in these areas where the various design innovations really pay off, making the HDX distinctly superior to any number of competing 20in desktop replacements. 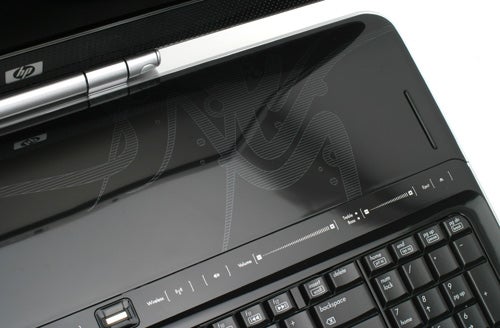 
With its HDX series, HP has taken the desktop replacement concept and raised the bar considerably. As such it’s a very attractive machine and though the lack of a Full HD display to match its HD DVD drive may be disappointing, the superlative design and excellent performance more than make up for this failing.