We recently took our first look at HP’s Pavilion dv6 range with the dv6-1240ea, going away very impressed and handing out a Recommended Award. Its strength lay in its excellent all-round performance and the outstanding value it represented given the features on offer. Now we’re looking at the dv6-1210sa, which is an AMD-based variant that slots in below the ever important £500 barrier, retailing for £479.99. 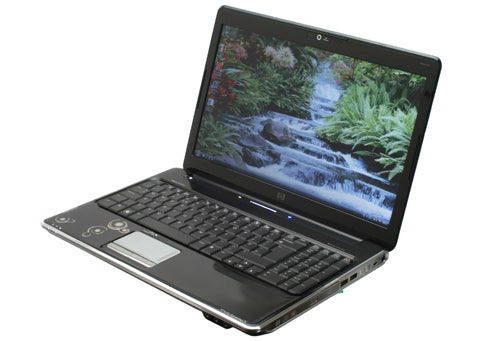 As we’ve already looked at the dv6 chassis in some detail, we won’t go into any great detail again, but suffice to say it works on most levels. While the predominantly glossy finish won’t be to everyone’s liking, the combination of imprint designs and contrasting shades make an eye-catching first impression. A good keyboard, with a useful number pad, ensures it’s a nice laptop to use, even if the mirror-like touchpad (and the laptop as a whole) needs a little attention to keep clean.


Where the dv6 really stands out, however, is in its connectivity and it’s all the more impressive at this low price-point. There are four USB ports in total, with one doubling up as an eSATA connection for fast access to external storage. Mini-FireWire, a 54mm ExpressCard slot and a trio of audio jacks provide ample multimedia options, as do the HDMI and VGA video outputs. There’s even the option of connecting one of HP’s docking stations, which could prove useful if you’re looking for a desktop replacement. 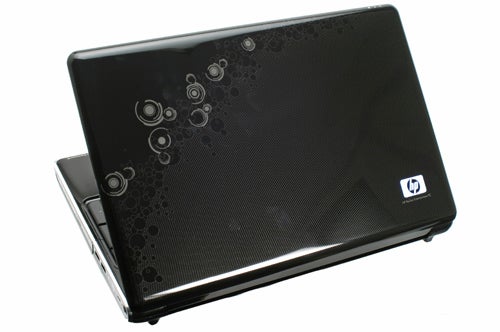 Audio is also very good for a laptop in this price range, with the Altec Lansing branded speakers boosted by SRS processing. What effect this combination actually has could be argued, but whatever is responsible the end result is pretty good. Bass isn’t plentiful but there’s a pleasing level of clarity and no obvious distortion, even at the high volumes the stereo speakers can reach.

Screen quality on this model is much the same as on it’s more expensive siblingl. At 15.6in in size and with a 1,366 x 768 native resolution it offers reasonable real-estate, while colour production is rich and punchy and black levels quite deep for a cheap laptop. Viewing angles, however, aren’t too wide, so you need to be in the right place to get the best view of things. Overall, though, the HP delivers an excellent audio visual performance for such an affordable machine.

Inside the 1210sa, a few compromises have been made to get the price below £500. You don’t, for instance, get Draft-N Wi-Fi (just regular old 802.11b/g) and there’s no Bluetooth, either. Of course the other main difference is that this is an AMD-based model, with processing handled by an Athlon X2 QL-65 running at 2.10GHz with 1MB L2 Cache. RAM has also been reduced from 4GB to 3GB, though the actual difference should be negligible on a 32-bit OS, while the graphics chipset remains the same 512MB ATI Mobility Radeon HD 4530 as before.

While the AMD processor might have similar sounding specs to the Intel CPU seen previously, the different architecture means it doesn’t perform anything like as well – 18 per cent slower overall in PCMark Vantage than the 1240ea. However, interesting though this comparison might be, it’s not fair on AMD or the 1210sa, which costs £220 (almost a third) less. A more useful comparison is with the Packard Bell EasyNote TJ65, which costs around the same, is the same size and uses a 2.0GHz Intel Dual-Core Pentium.


Here the Intel system is still faster in CPU intensive tests, such as the TV & Movies (+16%), Music (+10%) and Communications (+12%), but this is tempered by the Gaming tests, where the AMD system is a massive 43 per cent faster. In Trackmania Nations the 1210ea achieved an impressive 30.2 frames per second (fps) at medium detail with 4x anti-aliasing – around 10fps less than its more expensive cousin, the 1240ea. As for the Packard Bell, its performance is so poor it doesn’t even warrant comparison: games are unplayable.

What none of these tests show, however, is battery life and here both Intel based systems hold an advantage. How important this is will depend on the individual and at 2.85kg the 1210sa can hardly be classed as portable, but its battery life is quite poor. In the Productivity segment of MobileMark 2007 it barely passed two hours, ending 41 minutes before the dv6-1240ea and 93 minutes before the Packard Bell. This trend is continued throughout all the tests, making this one laptop that needs to be close to a power socket most of the time.


This performance imbalance poses an interesting question for the prospective buyer. For the money the dv6-1210sa offers very good gaming performance, much better than you’ll get from an Intel system at similar money, but you do sacrifice overall speed and battery life as a result. Moreover, on the whole, this AMD system is marginally slower to boot-up, warmer and noisier than its Intel competitors, though none are so bad to cause major complaint. Overall this is a very good laptop, but it’s worth thinking hard about what you want before committing. 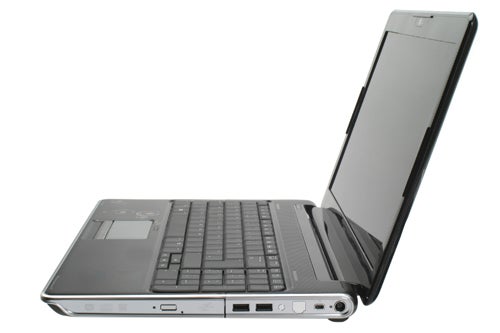 
At this price there are bound to be compromises, but none of them prevent the HP Pavilion dv6-1210sa from being a commendable effort. While its application performance is merely okay and its battery life quite poor, unlike many sub-£500 laptops it can play games competently provided they’re not too demanding. Add to this a decent chassis, excellent connectivity and a good selection of features and it’s definitely worth considering.