Not so long ago, a budget notebook meant a big compromise in terms of build quality and feature set, but these days you can pickup a reasonably specced notebook, from a tier one manufacturer for far less than you might think. One such notebook is the HP Pavilion dv5046EA – a notebook that looks good, has a decent spec and carries a brand name big enough to give peace of mind to many consumers.


When you look at the dv5046EA you don’t instantly recognise that it’s a budget machine – the finish is sleek, the design attractive and the feature set good. In fact you’d be forgiven for thinking that this was a machine costing over the £1,000 mark. In fact, most people that I showed this notebook to were amazed to hear that it will only set you back £699 including VAT! Of course the big question is whether the dv5046EA lives up to its good looks and feature set, and most importantly, whether you really do get what you pay for. 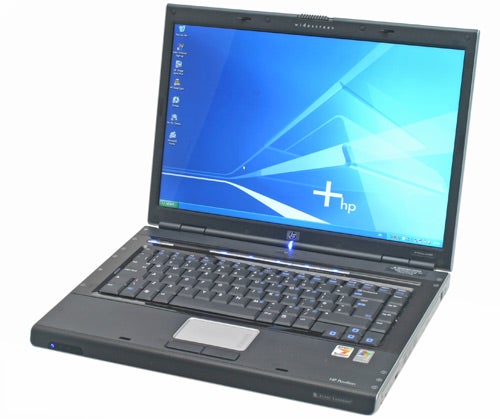 Let’s take a look at the features first – what you get for your £699 is an AMD Turion ML32 CPU backed up by 512MB of RAM; a pretty reasonable start. There’s a generous amount of storage space on offer with a 100GB hard disk – it’s only a 4200rpm drive, but that’s not really going to bother too many users. If you want to backup any of the data on the capacious hard disk, you’ve got a dual layer DVD writer at your disposal.


There’s a decent amount of connectivity with integrated 802.11b/g WiFi, a 10/100 Ethernet adapter and a 56k modem. Bluetooth is conspicuous by its absence, but it’s fairly rare to find a notebook at this price with integrated Bluetooth. 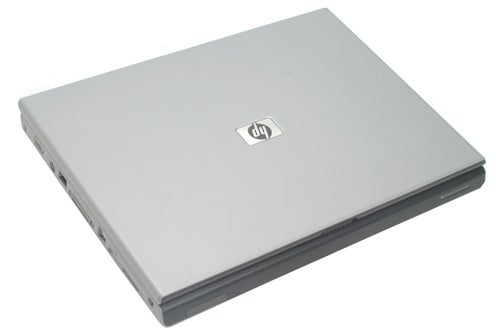 Opening up the matt silver lid reveals a gloss black keyboard surround that looks far more impressive than the price tag would lead you to expect. There’s a 15.4in widescreen display with a resolution of 1,280 x 800. It’s a pretty good screen with a high contrast coating that makes the colours look very vivid and vibrant. I generally prefer to see a resolution of 1,680 x 1,050 on a screen this size, but considering the price point that would be asking a bit much. Unfortunately the lighting isn’t particularly even, with the top left corner of the screen noticeably darker than the rest. On the plus side though, video playback did look very good.

The keyboard is well laid out with full size keys and the Tab, Caps Lock, Shift, Return and Backspace keys all large, as one would hope. The Ctrl key is in the bottom left corner where it should be, making life easier for keyboard shortcut junkies. Also the cursor keys are dropped away from the main keyboard, making them very easy to manipulate.


Unfortunately, when I started typing on the dv5046EA I noticed that characters where randomly missing in the text. It seemed that when I typed fast the keyboard just didn’t seem able to keep up. I found this somewhat strange and asked HP to supply me with a second notebook with which to compare. The keyboard on the replacement notebook showed no evidence of missed characters, while the keyboard itself felt more solid, with less flex when typing at speed. I can only assume that the original sample that I tried was faulty, but you might want to try the keyboard out before buying. 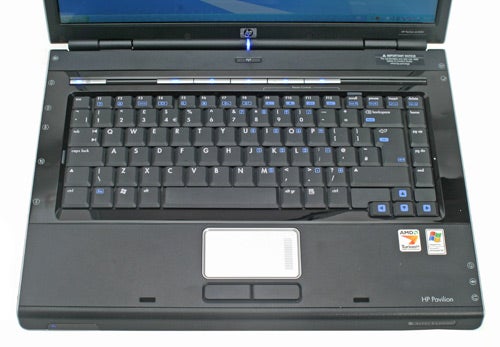 Below the Spacebar is a silver touchpad with a widescreen aspect ratio to match the display. On the right hand side is a textured area that indicates a vertical scrolling section. There’s no horizontal scrolling on offer at the bottom of the touchpad, but you’re far less likely to need to scroll horizontally. Below the touchpad are two buttons that respond with a reassuring click.


One thing that I really do like about HP notebooks is the port labelling. OK, so most notebook manufacturers label ports, but they tend to put the labels next to the ports, which means that you still have to peer around the chassis to find the port you’re after. HP on the other hand puts the labelling on the top of the notebook, surrounding the keyboard – the upshot is that if you want to plug something into a USB port, you don’t have to search around the chassis for one because there’s an icon just to the left of the Ctrl key telling you where the USB ports are. Likewise there are labels for all the ports and connectors, including power and the Kensington lock point – very user friendly HP, well done. 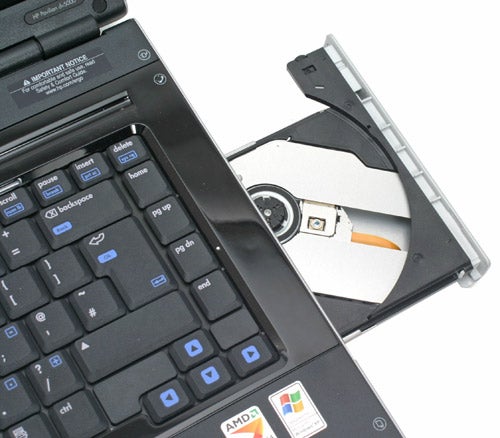 Talking of ports and connectors, you’ve got a fair amount of options with the dv5046EA. The right side is dominated by the integrated DVD writer but you’ll also find the power socket, a modem socket, USB 2.0 port, mic socket, headphone socket and an Express Card slot. The latter is good to see, especially since I’ve only seen Express Card slots on Intel based notebooks up until now. The headphone socket doubles as an S/PDIF output as well.


I don’t often talk about the built-in speakers in a notebook because they’re usually pretty poor, but I think the Altec Lansing branded speakers in the dv5046EA deserve a mention. The quality is still nothing to write home about by proper audio standards, but they are definitely a cut above the norm. The speakers are more than adequate for watching movies, or listening to some background music while you work, as long as you don’t crave too much bass. If you try to push the bass level up, the sound will distort – the inclusion of a subwoofer would have resolved this, but again it would have pushed the price up.

Obviously at this price point, you’re not going to get a super thin and light machine, but that’s not to say that it’s excessively big and heavy either. Weighing in at 2.98kg it just manages to sneak under that 3kg mark, but not by much. The dimensions of 435 x 355 x 188mm (WxDxH) mean that it’s not any larger than any other 15.4in widescreen notebook either, so you could carry it around with you every day if you wanted to.


When it comes to performance, the dv5046EA isn’t going to break any records, in fact it lags behind the Gateway MX6640b that was reviewed last week – the performance difference is probably due to the Gateway having 1GB of RAM installed. The HP turned in a SYSmark 2002 score of 205 compared with 218 on the Gateway. Similarly the Gateway lead the HP in PCMark with 2403 compared to 2038. Battery life is also a little below par, with the HP managing 142 minutes in MobileMark, while the Gateway lasted for 228 minutes.

Software wise you get Windows XP Home, Norton Internet Security (with a 60 day Live Update trial) and a copy of Microsoft Works 8.0. The latter is good to see and will allow users to get productive straight out of the box – I prefer to see Works Suite which has MS Word included, but again it would have been hard for HP to include this while keeping the price down.


All in all HP has put together a pretty good notebook at a very reasonable price. The warranty is only one year, but that’s pretty standard with consumer notebooks and it does include a collect and return service.


The HP dv5046EA is a pretty decent notebook at a very reasonable price. But despite coming in £100 below the Gateway MX6640b, the HP can’t compete on performance or battery life. I’ve no doubt that if the dv5046EA had shipped with 1GB of memory the performance scores would have been on a par with the Gateway, but that wouldn’t change the battery life. Ultimately, the dv5046EA is a good budget notebook, but it’s worth checking out what the competition has to offer before putting your money down.