With most people’s wallets feeling the pinch of late, spending money on expensive gadgets is something of a luxury. So, if you are going spend some money, it’s all the more important to spend it wisely. Of course, people’s perceptions of value always depend on their needs – many, for instance, would probably see spending more than £500 on a laptop somewhat frivolous. Yet, looking at the HP Pavilion dv5-1011ea, its features and its sumptuous design, the £730 asking price still looks like excellent value provided you want and need what it offers.


A multimedia all-rounder, the dv5 marks our first look at HP’s new notebook design and we’re already impressed. Some classically HP-esque elements are still present, like the subtly curved glossy black lid and the silver imprint design, though here it’s a rather more straightforward criss-cross pattern as opposed to the elaborate swirls of previous models, like the dv6750ea and dv2699 Special Edition. This is joined by a delightfully backlit HP logo nestled in the corner, an effect that manages to be eye-catching but not too garish or flashy. 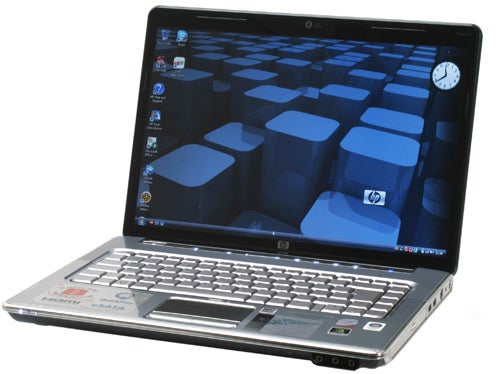 It is inside, however, where the most marked changes have taken place. Everything is just lighter and more airy, with a metallic silver keyboard and silver come chrome coloured surround replacing the black and metallic grey of previous machines. Above the keyboard sit the usual set of touch sensitive controls, this time set behind a frosted glass-like effect that looks very nice indeed. 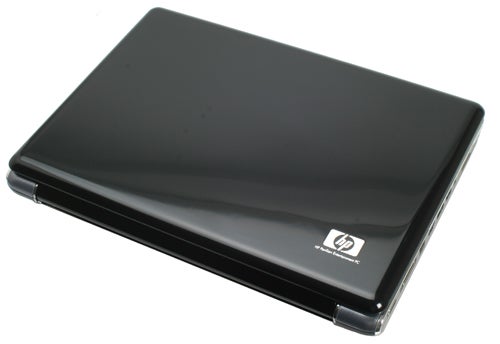 Then there’s the screen. Here HP has chosen to stretch a sheet of protective glass over the bezel and screen right to the edges, effectively creating a seamlessly flat display area with the integrated webcam set behind it. It’s an incredibly effective visual device that neatly relegates the typically ugly bezel to the periphery and it’s something we can easily see other companies using.


Below the keyboard is a nicely proportioned touchpad that’s sunk slightly into the chassis. It’s finished in chrome coloured smooth plastic and if it doesn’t quite provide the same tactile contrast as a textured surface might, it works well nonetheless. Indeed, everything about the dv5’s design simply “works well”. There’s a cohesion and simplicity evident that’s always the hallmark of good design. Pleasing lines frame the connections and optical drive on each side and no element seems without purpose, either visually or practically. 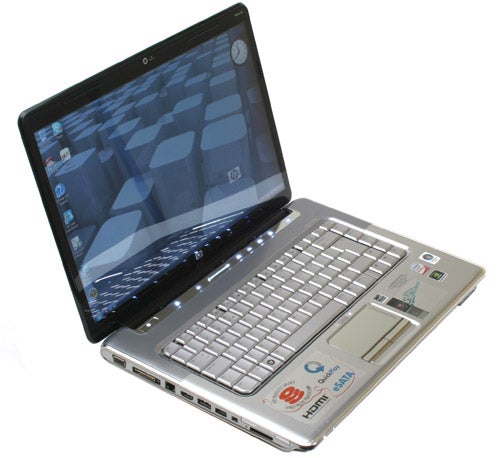 Build quality is pretty solid, too. There was no evidence of creaking panels or unwanted flex and though glossy finishes predictably pick up fingerprints fairly easily, a cleaning cloth is provided and only real carelessness should result in any lasting damage.

If the dv5 is attractive and well put together, one thing it isn’t is very portable. At 2.92kg it’s treading awfully close to the 3kg mark when many other 15.4in laptops are closer to 2.7 or 2.8kg. Neither is it particularly slim, measuring a notional 34.9mm at its thinnest to a comparatively chunky 41.9mm at its thickest – a figure that’s accurate for 90 per cent of the chassis. Seeing as this is more of an entertainment station for the home this isn’t a cataclysmic problem, but it does make taking it out and about from time to time a little more challenging. 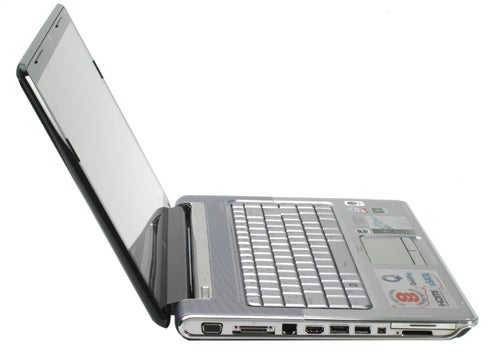 This can be explained away somewhat, mind, when you take a look at the innards of the dv5-1011ea. Its starting point, a Centrino 2 spec Intel Core 2 Duo P7350 running at 2.0 GHz with 3M2 L2 Cache, is actually quite modest. It’s one of the medium voltage chips, with power consumption of 25W as opposed to the 35W norm, but it’s more than capable for most needs and keeps things running smoothly. This is supported by 4GB of 800MHz rated RAM, too, so you’re hardly limited there and for storage you get a reasonable but not massive 250GB drive.


Delving a little deeper reveals this should be a capable gaming machine as well. An nVidia 9600M GT with 512MB of dedicated memory provides the graphics grunt and it’s about as powerful as you’re going to get outside of proper high end gaming laptops. It happily chomped through Trackman Nations Forever at 33.9fps, with detail set to high, four samples of filtering and two samples of anti-aliasing running at 1,280 x 800. 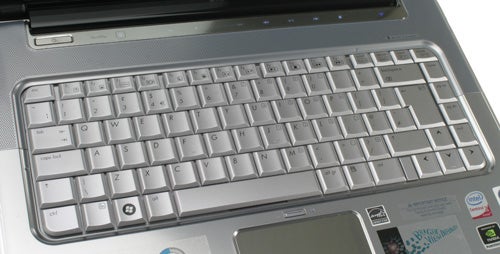 Networking options are as thorough as you can get, with Intel’s latest Draft-N capable Wi-Fi Link 5100 module, Gigabit Ethernet and a modem as well. There isn’t, however, Bluetooth – a surprising and presumably cost related omission. Still, if this puts a small downer on things then the inclusion of a Blu-ray drive quickly improves matters. It can only read Blu-ray discs, not write them, but few notebooks can offer this and DVD capacity is more than sufficient right now. 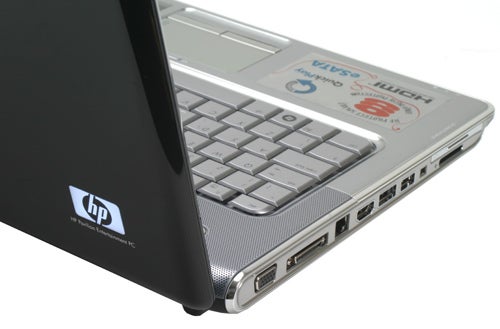 Naturally there’s an HDMI port for connection to a TV or LCD Monitor and all round connectivity is excellent. There are three individual USB ports and a fourth is handily added through the combined USB and eSATA port. These are joined by a four-pin FireWire port, the ubiquitous memory card reader and a 54mm ExpressCard slot. As with all HP Pavilion laptops you also get a handy travel remote that can be stowed in the ExpressCard slot. Finally, on the front, are dual headphone jacks, one of which doubles as an S/PDIF output, a microphone input and an infrared receiver for the remote.

So far, then, the dv5 has racked up a fair amount of praise from us and rightly so: it’s both attractive and feature laden and the price is reasonable too. Unfortunately, things are let down somewhat by the screen and we can’t help but wonder if that fancy new glass panel is to blame.

In some respects it’s pretty good. It handles quite challenging grey shades rather well, black levels are reasonable for an LCD display and there’s nary a hint of backlight bleed, but the colour vibrancy, fidelity and overall brightness levels are distinctly lacklustre. This means photos and videos lack a little punch and in bright light reflections also become a problem, meaning you’ll have to turn brightness up higher than normal to compensate – impacting on battery life as a result.


It’s a shame also that HP hasn’t taken a leaf out of Acer’s book and added Dolby Home Theatre to the dv5. It adds a lot of value to a multimedia machine such as this, especially one with a Blu-ray drive – it helps enhance audio from the integrated speakers and does a particularly effective job when listening through headphones. That said the integrated speakers on the dv5, like previous HP laptops, are pretty good. Branded as Altec Lansing, though it’s best not to read too much into that, they provide reasonable clarity and volume and are good enough for some casual music listening when nothing better is at hand.

As for performance the dv5-1011ea is very capable, without ever astounding. Its 2.0GHz processor isn’t the fastest Intel currently offers, not by a long stretch, but its higher front side bus (new CPUs now reach 1,066MHz) means it easily outperforms older CPUs with the same clock speed, like the chip found in the Samsung R510, so unless your demands are particularly high, it’ll do fine. You also have the added bonus of decent gaming performance, as we outlined earlier.


Battery life is reasonable verging on pretty good given the components, specifically the graphics card, used. In MobileMark 2007’s Productivity suite the dv5 managed two hours and 50 minutes, extending to three hours in the lower intensity Reader test. Meanwhile, we were pleasantly surprised to discover it managed just over two hours in the DVD playback test at full screen brightness, so you could watch a short film or some TV episodes without plugging in and a little more if you turn down the brightness.


There’s much to like about the HP Pavilion dv5-1011ea and it comes pretty close to being an ideal all-round multimedia machine. Indeed, the only thing that holds it back and precludes it from an award, is the slightly disappointing screen. This doesn’t mean you should disregard it completely, its superb design, excellent feature set and reasonable price ensure that, but if you’re interested then it’s worth taking a look at one in the flesh before settling on it.