If you’re after portability and power then the 13in form factor has long been the best option. There have been numerous excellent examples in this arena over the last year or two, including the now discontinued Dell XPS M1330, the outstanding Sony VAIO Z Series and the latest iteration of the machine that arguably popularised the format, the Apple Macbook. More recently Samsung has provided another excellent value option in the shape of the Q320 and though the HP Pavilion dv3-2055ea we’re looking at today isn’t quite as cheap, it still offers excellent value for money.


This is largely thanks to an exceedingly generous feature set. Prices range from £750 to £800 and for this you benefit from a whopping 500GB hard drive, Draft-N Wi-Fi, Bluetooth, discrete nVidia G105M graphics with 512MB dedicated memory and 4GB of RAM. Only the CPU is a little disappointing given it’s not on the bleeding-edge of Intel’s range, but nonetheless the Core 2 Duo T6400 runs at a reasonable 2.0GHz and offers decent all-round performance for most needs. 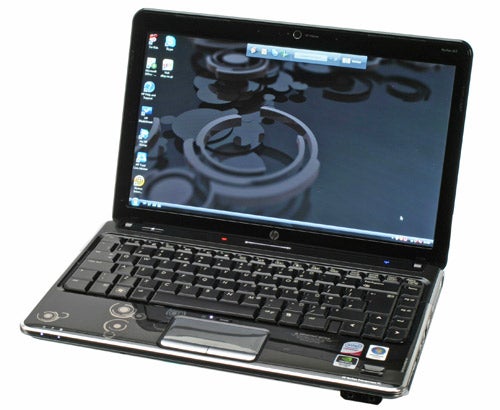 HP continues to impress with the connectivity on offer here. Starting on the left there’s the power input, which also boasts a handy LED to indicate it’s active, as well as two USB ports. An 8x DVD Re-writer with LightScribe support dominates the rest of the space.


On the front are line-in and line-out connections, which are accompanied by an IR receiver. This works with the provided 34mm ExpressCard remote, which is always a welcome addition. However, the placement of the IR input could be more convenient, since it points downward and is hidden beneath the front lip of the machine.

Connectivity is rounded off by a bevy of options on the right that comprise a 34mm ExpressCard slot, a 5-in-1 memory card reader, a combined eSATA/USB port, an HDMI out, the Gigabit Ethernet port and a VGA out. On the main body of the machine, meanwhile, is a fingerprint reader – something not often seen at this price point – while a webcam with dual-microphones is subtly integrated above the screen. Only a Blu-ray drive could improve this picture, but this is available in the dv3-2060ea for £879.95, which is still a pretty good price for a Blu-ray equipped machine with this spec.

Like so many laptops of late the dv3 range has moved to a 16:9 aspect display. Its 1,366 x 768 resolution does mean less vertical space than older machines, but the wider aspect is better for film viewing and also makes it easier to view documents side-by-side – a less advertised but arguably more useful benefit! Like many this is also an LED backlit display, so it’s very bright, though the reflective finish won’t help matters in bright sunlight. In normal light the image quality is good without ever being outstanding. Colours are nice and vibrant, black levels decent, and viewing angles reasonable. Small text could be sharper, but overall this is a good effort.

While it might not be immediately apparent from the photos, the dv3-2055ea is actually finished in a very dark brown – HP calls it Espresso, but we’re calling it brown. This, as is the modern habit, is coated in a glossy varnish, so fingerprint issues apply here, though the brown finish doesn’t make them as obvious as a black one. 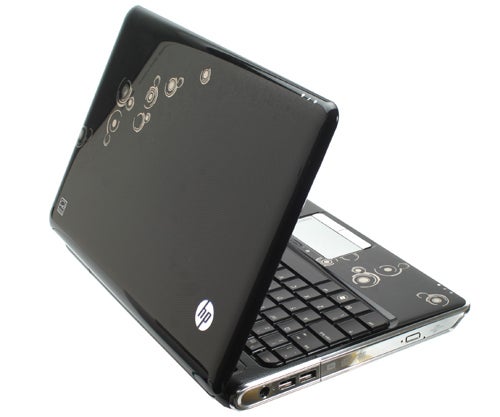 Another typical trait of HP laptops is their artsy imprint designs and the dv3 doesn’t disappoint. As ever they definitely bring a little individuality to the table, though we must admit the novelty has worn off a little – if only because we’ve seen it so often. Indeed, this view could be applied to the machine as a whole since the HP design language is very consistent across its whole range. However, this is our inner jaded journalist talking really; overall, the dv3 is a classy and attractive machine. It’s also well put together. We encountered no creaking in the body panels and while the system does generate a little noise under stress, it remains pretty cool.

It’s also a machine that benefits from an outstanding keyboard. Its keys have a wonderful crisp and even action, with just the right amount of travel and a pleasing lack of flex. We can find no issue with the layout, either. Keys are large and easy to use and HP has made good use of the space available, squeezing in Page Up and Down keys to the right of the Return key.


Alas, the touchpad isn’t quite so faultless. It works well enough, its mirror-like finish is very smooth, it’s nicely proportioned and the buttons are firm and responsive, it’s just the positioning that’s gone wrong. That’s because HP has put it slap-bang in the middle, so it obstructs typing when active. Now, HP has a toggle button to deactivate the pad, but why not just put it in the right place in the first place? After all, HP’s other laptops don’t have this problem and they all have toggle buttons, too. 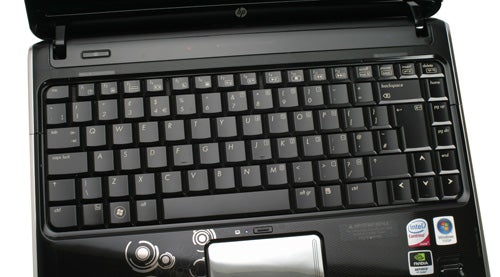 Happily, in the greater scheme of things, this is a fairly minor complaint, especially when you begin to enjoy the excellent speakers. They’re branded Altec Lansing and regardless of whether this is meaningful or not, the end result is impressive. They produce nice mid-range clarity, a hint of bass and can reach good volumes. This makes them good for casual music listening, perhaps even the occasional TV episode.


This audio prowess is a good illustration of what you get for the extra £100 or so you might spend over the Samsung Q320, whose similar spec belies some truly atrocious speakers. Another example of where the extra cash goes is the smart touch controls, which comprise a mute button, a volume slider and a wireless radio toggle. Strangely, given HP’s past habits, you don’t get playback touch controls, though these are mapped to the F8 to F12 keys. Throw in the fingerprint reader and the provided remote and there are enough reasons to justify the extra cost.

So far, then, we’ve established that this is a very well-featured laptop which, thanks to the massive hard drive, would be ideal if you’re after a machine that would effectively be your only PC. With 500GB to play with only the most dedicated of hoarders would run out of space for music, video and photos. 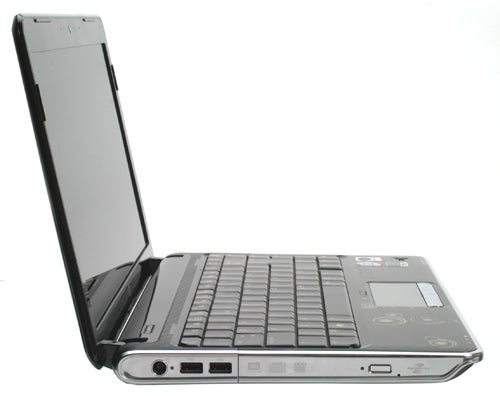 It’s not as if the dv3 is just feature-rich, either. It’s also a very good, though no quite outstanding, performer. Looking at the PCMark Vantage results it compares well to the Samsung Q320, though the Samsung is perhaps five per cent faster in some instances. One can only surmise this is due to HP installing more ‘bloatware’ than Samsung, though the HP isn’t over laden with useless tat.


It’s also worth noting the difference between the HP and the Acer Aspire Timeline 4810T, which uses a 1.4GHz ultra-low voltage CPU. In the Productivity segment, for example, it’s around 30 per cent faster, which is a fairly sizeable difference in processing performance.


Of course, where battery life is concerned things are a little different, though even here the dv3 puts in a very good showing, beating the Samsung in all the tests. In the Productivity segment it managed an impressive four hours and 10 minutes, 40 minutes more than the Q320. This trend is continued in the Reader and DVD tests, with results of four hours 43 minutes and just under three hours respectively.

This means, with frugal use, you could get up to five hours of normal usage and perhaps three and a half of video playback – more than enough for even a long film. These are extremely impressive results, though the 55Watt-hour battery of the dv3 still can’t match the incredible seven-hour plus results of the 4810T. If you’re after the maximum battery life possible for this money it is still the best bet, but the dv3 is arguably a better all-round machine for a consumer.


This is mostly due to its flexibility. Its nVidia graphics won’t power through the latest games titles, not without significant compromise, but it can do a decent job. In Trackmania Nations, for instance, we managed 44.4fps at Medium settings, while adding four samples of anti-aliasing still retained a playable 34.2fps. This is a little faster than the Q320 due to the HP’s larger complement of graphics memory: 512MB versus 256MB. Suffice to say the Acer, with its Intel integrated graphics, can’t come close and it also struggles with Full HD video, something the HP can handle comfortably. 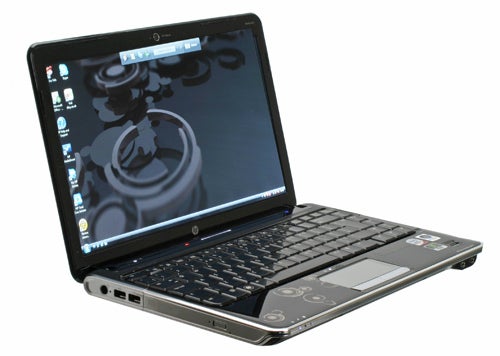 
This 13.3in machine delivers on many levels. It’s packed full of useful features, particularly that capacious 500GB hard drive, while the design is attractive – if a little showy. This is backed up by decent raw performance and excellent battery life. It’s not quite the perfect bargain, but for £750 you couldn’t ask for a great deal more.

This HP isn’t quite a processing beast, but it’s more than adequate for the average user and should chew through photo editing tasks quite comfortably. It does rank a little slower than the Samsung Q320, despite using very similar hardware, but the difference is negligible.

(centre)Just over four hours is an excellent result. Nearly 40 minutes longer than the Samsung, which was no slouch.(/centre)

(centre)You could get as much five hours from the HP if you turned the brightness right down.(/centre)

(centre)Three hours at maximum brightness is very good. Reducing brightness could mean DVD playback for as long as three and a half hours.(/centre)