Recently we took our first look at the HP Pavilion dv3 range in the shape of the dv3-2055ea. We went away very impressed, particularly due to the excellent battery life, massive 500GB hard drive and generous features on offer given the £750 price. Now we’re looking at its slightly cheaper cousin, the dv3-2050ea. At £699.99 online it’s only £50 cheaper, so the question is whether it’s £50 worth saving, or £50 worth spending. 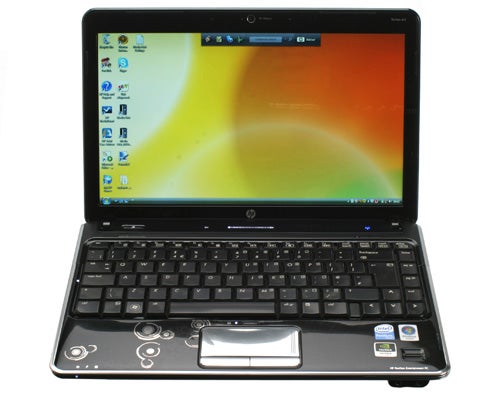 Before we get into how the two differ let’s refresh ourselves with the dv3 chassis. Those who aren’t so keen on glossy plastic need not apply here, since the dv3 is covered in the stuff, but if you’re indifferent then this is a smart, eye-catching and well put together machine. Its dark brown ‘espresso’ finish looks black in most lights, but it’s a subtle and pleasant change, while HP’s signature imprint designs continue to add an individual look and feel.


This is also a machine that offers prodigious connectivity. There are three USB ports in total, one of which doubles as an eSATA port, HDMI and VGA for video, a 5-in-1 card reader, a 34mm ExpressCard slot, Gigabit Ethernet, and line-in and line-out connections for headphones and microphones. You also get a mini-remote, which slots into the ExpressCard slot, as well as a built-in IR receiver on the front.

Other benefits include a webcam with dual-microphones in addition to a fingerprint reader, which is even more of a rarity at this price than it was on the £750 dv3-2055ea. Other premium touches that belie the machine’s affordable nature are the touch controls, which comprise a mute button, volume slider and wireless radio toggle.

Perhaps the best element of the dv3, though, is its keyboard. Its keys are well arranged and have a nice crisp action that makes typing a breeze. Only the oddly positioned touchpad spoils things, since it can interfere with typing, but HP does provide a dedicated toggle button to remedy this should it bother you.

Audio visual performance is also above par. We particularly enjoyed the Altec Lansing speakers, which deliver warm and well defined mid-tones and a nice level of clarity, even if bass is predictably lacking. Likewise, while not outstanding in any particular way, the 13.3in, 1,366 x 768 resolution display delivers decent colour fidelity and is bright and readable, though the glossy finish is predictably reflective.

Now we’ve dealt with the exterior fripperies it’s time to delve a little deeper and while the differences between this and the dv3-2055ea are subtle, they do exist. First among these is the processor, which is a dual-core Intel Pentium T4200. Despite it not having the Core 2 Duo moniker it’s a very similar CPU to the T6400 that powers the dv3-2055ea, the only difference being it has 1MB L2 Cache instead of 2MB. This means it shares the same 2.0GHz clock speed and 800MHz front-side bus. 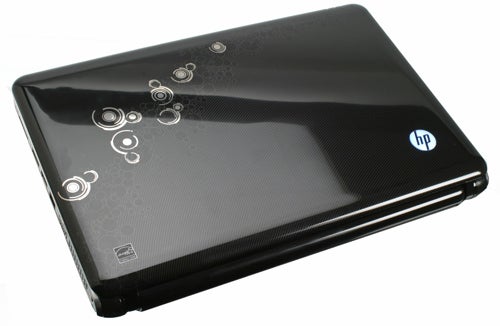 Pleasingly, though, you still get 4GB of RAM and while the 32-bit install of Windows Vista can only address 3GB of this, future upgrades could remedy that. Unsurprisingly the hard drive is smaller, but 320GB is still more than enough for most needs, matching the Samsung Q320, which is now nearly £90 cheaper.


This model also retains Bluetooth connectivity, but one vital change is the lack of Draft-N Wi-Fi, replaced with an 802.11b/g module from Broadcom. This might not affect regular consumers, but anyone who has a Draft-N Wi-Fi router will have cause for pause given the Samsung offers it for less outlay.

In every other respect, however, the dv3-2050ea is the exact same machine. This means you also benefit from an nVidia G105M graphics card with 512MB dedicated memory. Again this is the same card as found in the Samsung Q320, but it only has 256MB of memory, so the HP does gain a little performance.


This isn’t enough to make it a real gaming machine, but does mean a playable 41.7fps in Trackmania Nations using the medium detail setting at 1,366 x 768. Even with four samples of anti-aliasing a decent 31.6fps was achieved. You shouldn’t expect this kind of performance in the latest titles, not without significant compromise, but the likes of World of Warcraft, Spore and The Sims should chug along quite happily. 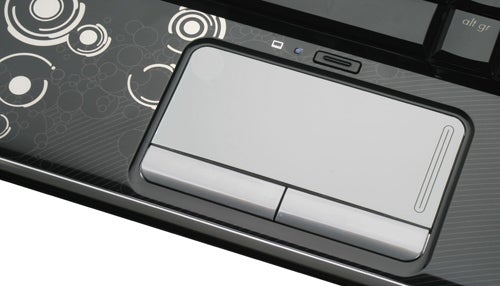 HP isn’t as prolific as some where pre-installed software is concerned, which is no bad thing. Most notable is HP’s MediaSmart suite, a multimedia package dealing with DVD, music, photos and video. This is a slightly tweaked version of the same package found in the company’s TouchSmart PCs, the IQ500 and IQ810. It’s nice, but for a notebook is largely superfluous. Likewise, HP’s Total Care Advisor, while useful for a novice, only replicates native Windows functions, so could be uninstalled without any harm.

Given the dv3-2050ea we’re reviewing here has a cheaper CPU than the Samsung Q320 or dv3-2055ea it should be a little slower, but we weren’t expecting massive differences. For the most part this is the case, with the difference between the HP and the Samsung hovering around 10 per cent, though the gap between the two HPs is generally smaller. A faster hard drive appears to be the source of the Samsung’s advantage over the two HPs, but in general all the systems are well matched. 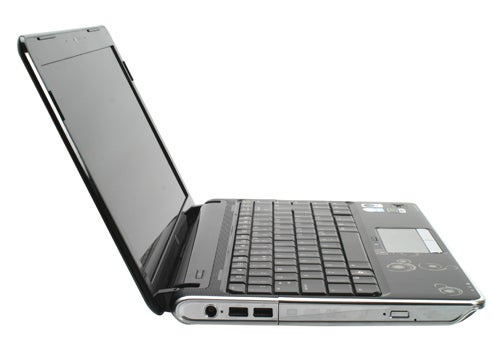 In general this system will cope perfectly well with photo editing and normal everyday multi-tasking; even a little video editing should be okay. However, if you want to edit HD video from camcorder or process RAW files from a DSLR, for instance, you’ll probably want to look at something a little more powerful such as the Dell Studio XPS 13.


Our MobileMark 2007 battery benchmarks continue to show comparable performance, but the HP’s have a definite advantage and both HPs deliver near identical results. Indeed, in the Productivity segment they are identical, with both producing an excellent four hours and ten minutes – 40 minutes more than the Samsung. Ultimately all three still offer very good battery life, but the two HP’s are a step above. 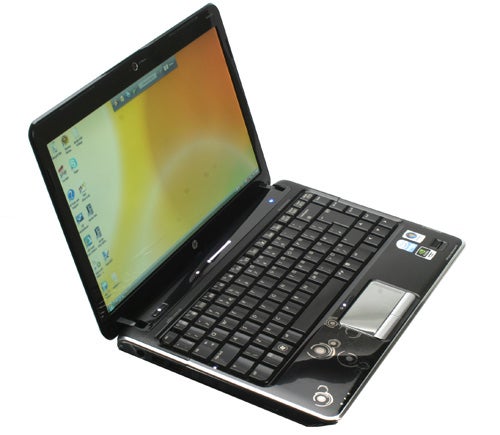 To our minds, though, this still leaves this version of the dv3 in an awkward position. It’s definitely a very good machine, that much is obvious, but for just £50 more the dv3-2055ea version offers a slightly faster CPU, a significantly larger hard drive and Draft-N Wi-Fi – all desirable options. And, on the other side of the fence, the Samsung Q320 is £90 cheaper, is faster, also has Draft-N Wi-Fi and offers decent battery life, too, making this the hardest of the three to recommend.


Just like its more expensive cousin, the HP Pavilion dv3-2050ea is a very accomplished and well featured laptop. Performance is good, without being mind blowing, while battery life is excellent. However, it doesn’t quite represent enough of a discount over its stable mate or enough extra value over the Samsung Q320 to earn an award.

While the dv3-2050ea is slower than its more expensive sibling and the Samsung Q320, the difference isn’t massive and for most needs it’s a very capable machine.

While the application performance is slightly less, no such compromise can be seen in the battery results, where the dv3-2050ea breaks the four hour barrier.

Its impressive showing continues in the Reader test, showing the HP’s have a small but not insignificant advantage over the Samsung.

No change in the DVD test and were one to reduce the screen brightness, three and half hours of DVD playback would be attainable.