When it comes to well designed notebooks it’s usually Apple that gets all of the attention. However, manufacturers of Windows based machines have been making great strides in recent years and when I see machines such as HP’s Pavilion dv2560ea I can’t help think that it’s a little unfair that Apple gets all the glory. The comparisons will be made however, as the Pavilion dv2560ea is in the same size, weight and price bracket as Apple’s Macbook, and Samsung’s Q70. 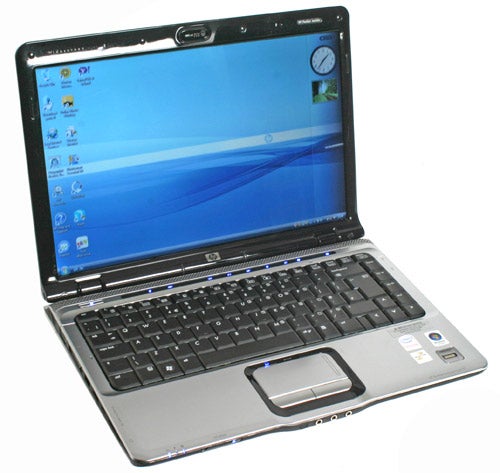 The dv2560ea is the top-of-range model from HP’s consumer range and as such is billed as an entertainment notebook, rather than a business notebook. This accounts for the glossy finish on the lid, the screen and throughout. It’s also why you get a subtle pattern effect on the lid, on the inside and even on the default desktop wallpaper. You also get blue backlit shortcut buttons above the keyboard that take you straight into HP’s QuickPlay application. Finally, in case you were in any doubt, the words ‘HP Pavilion Entertainment PC’ are written on the palm rest of the notebook. 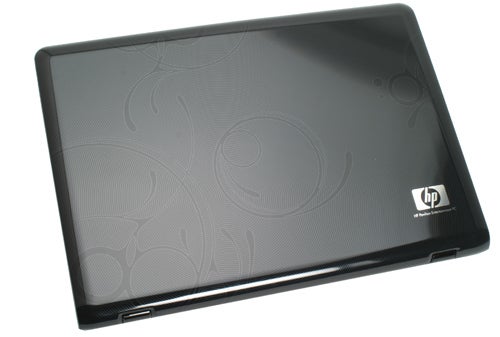 As I started to use the dv2560ea I found myself immediately comfortable with it. It’s a compact notebook with dimensions that are just right. Some desktop replacements are so large they can be more intimidating than a regular desktop, while some notebooks are just too small to be used comfortably. The HP is just about perfectly sized, though the 2.43Kg weight makes it slightly heavier than Apple’s Macbook and Samsung’s Q70. However, it more than makes up for that extra weight with its features. The HP is based on the new Intel Santa Rosa platform, which potentially offers an array of benefits. In reality though, most notebooks don’t have most of these, and in practice, it means a new CPU with the latest power saving features, and a new chipset to put it in. There’s no Turbo Memory, no Pre-N Wi-Fi (just regular A/B/G) and no Gigabit Ethernet, the latter of which is offered by the MacBook. Ho hum. 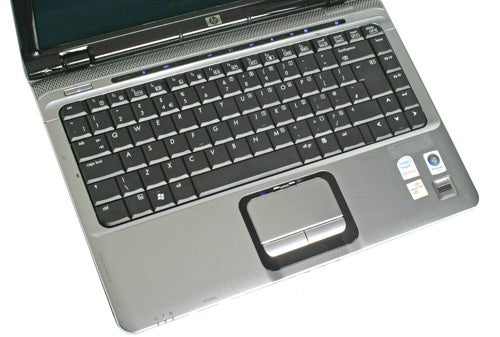 At least the display is rather nice. It’s The resolution is a standard 1,280 x 800, but the screen is 14in, larger than average. It has a subtle but effective glossy coating that does a great job at boosting the impact of colours and contrast. It’s inevitably suffers from high reflectivity, so much so that I wondered what the strange pattern I could see on the screen was before I realised it was actually my T-Shirt. However, this was in the brightly lit office environment, so would fare better in a home.

A web cam is discreetly embedded into the lid of the notebook, with a blue light indicating when it’s powered on. The image and detail were decent but there was an annoying flicker effect and switching between 50Hz and 60Hz in settings made no difference.

Beneath the screen a grille effect hides the speakers, branded by Altec Lansing. As such I was keen to give them a good run out and fired up the DVD of Apocalypse Now. It dealt with the ensuing sound and fury with aplomb, drawing me into the action and drama. The display did a good job too with a convincing palette and a fair amount of detail in dark areas. Viewing angles aren’t marvellous though, so you’ll need to crowd round if it’s movie night.


Under the speakers is a array of oval shaped touch sensitive buttons, which fires up HP’s Quick Play application – a full screen media player, for DVDs and music. It’s perfectly functional, but it seems unnecessary when you have access to Windows Media Center, which is included in Windows Vista Home Premium, the operating system installed on the notebook. There’s no TV tuner built-into the notebook though, so you’ll need to go for an external tuner if you want to add one.

Around the edges of the keyboard HP has thoughtfully placed icons at the top, so you can find what you’re looking for. Thus, you’ll see that there are two USB ports on the right hand edge, a memory card reader that can accept SD, Memory Stick, MMC and unusually, xD. There’s an Express card slot too. However, it doesn’t indicate the third USB port on the left hand side, nor the mini Firewire port, the Fast Ethernet port, the expansion port for HP docking stations, the VGA output or the S-Video output. This is a good range of video options, so you could hook up to a projector or suitably equipped TV if you wished.

Accompanying the USB ports on the right hand edge is a modem port and a Lightscribe capable DVD Writer, so you can burn images directly onto the discs, which is a good extra. Towards the rear you’ll find the power connector, with a blue light surrounding it when plugged in.

In performance terms we were pretty happy with the Pavilion, though the overall score in PC Mark was lower than both the Samsung Q70 and the Dell Latitude D630. This is primarily down to the relatively low horsepower of the integrated Intel graphics chip. That said, the new Santa Rosa improved X3100 graphics of the 965 chipset is going to be absolutely fine for most things, especially as Intel has improved its video performance, but you are still going to get more grunt from the nVidia 8600 chip in the Samsung Q70. Therefore if graphics work, or the occasional game is a priority that will be the better option. In the areas other than graphics though it keeps up. 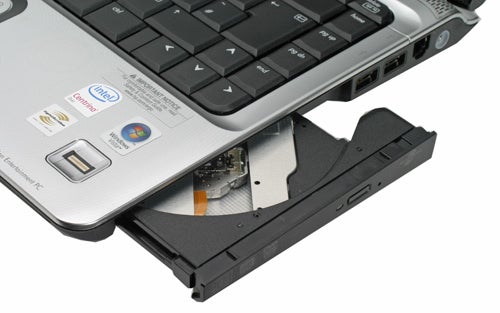 While the connectivity is good and the styling pleasing to the eye, what I like most about the HP was the keyboard. The frame has just the right level of firmness and the keys have a pleasing amount of travel. the Ctrl button is at the far left, not the Fn key, which means you can hit it accurately without looking down. The Backspace and Enter keys are the correct size and the arrow keys and Page Up/Down are well placed too. The trackpad has a scroll area on the right which is fine but I found the mouse buttons to be a bit on the spongy side.

What’s unusual for a consumer notebook though is that there’s a thumbpad reader on the right hand side. The technology was first introduced on business notebooks but it seems it has now trickled down to regular folk. It’s not just a gimmick, it’s useful too. Once you’re enrolled two fingers, (one for spare, in case you lose one) you can use it to log onto Windows without having to type your password and in fact onto any web site that needs a username and password. The first time you do so, VeriSoft software pops up and asks you to put in your username and password for that site, and once done, you just need to swipe to login. It’s quite neat and saves you having to remember multiple passwords, enabling you to make them more complicated and therefore more secure. 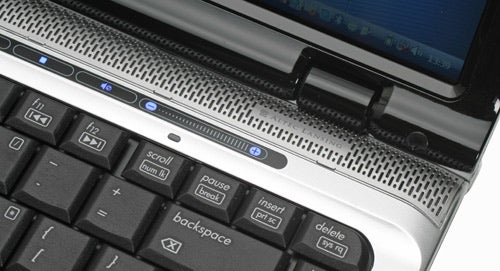 Internally, the Pavilion dv2560ea is powered by a Santa Rosa style, Core 2 Duo T7300, running at 2.0GHz, with 4MB of Level 2 cache and running on a 800MHz front-side bus. There’s 2GBs of RAM to go along with this, which is what Vista is happy with, though there isn’t room to add more. The 5,4000 rpm spindle speed of the hard disk is par for the course, but the 160GB capacity is quite generous.

In terms of battery life we were forced to go with a subjective test. I ran it twice solely off battery power. I used maximum CPU and brightness and Wi-Fi enabled so it was quite a test. The first time I saw just over two hours of use, while the second, with no DVD playback and only light use, got me closer to three. It’s was satisfactory, but you should be able to eek out more by dimming the screen and turning off Wi-Fi. 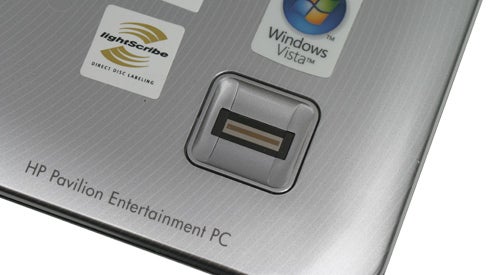 HP’s presentation and design of the notebook is undoubtedly consumer friendly and on the whole this is a good thing. Inevitably though, this means that you have a smattering of unnecessary items clogging up the desktop, such as shortcuts to Napster, Yahoo and eBay of all things. Clearly there’s been some sort of commercial deal behind this but it does feel patronising, as if those who buy HP will not be able to find these sites without this help. 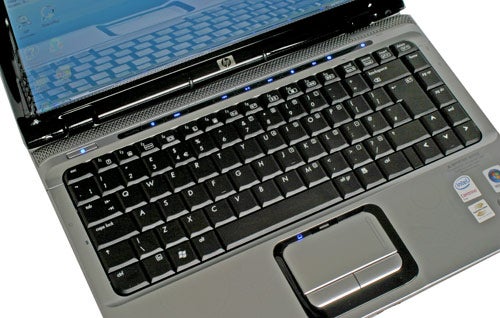 Overall, this is a very convincing package for £900 asking price. It’s big rival, the Samsung Q70 is lighter, sleeker and some may prefer its minimalist styling. It also has better graphics performance. However, it’s screen is smaller and not as good, and it lacks features such as the better speakers, the webcam and niceties such as the fingerprint reader. If you need to take a notebook with you in your bag in a regular basis, the lighter Samsung will be preferable, if not I’d go with the HP – it’s a better notebook.


HP has put together a convincing package for the money. It features a good quality 14.1in screen and the design and feel is a cut above, especially the keyboard. It’s well featured too with a webcam and a fingerprint reader. Faster networking and graphics would have been nice, but as it is this is still a good buy.