Can’t afford one of HP’s Envy 14 Spectre designer Ultrabooks? Worry not, if you want to stand out without stretching your wallet too much there’s always the ‘premium’ Beats range of Dr. Dre-certified HP laptops, finished in a rather fetching combination of black and red. Today we’re looking at the latest addition to this stable, the Pavilion dm4-3000ea Beats Edition.

First off let’s make one thing perfectly clear: Beats Edition laptops are nothing unique. They’re merely your regular HP laptop with decent specifications stuck into a premium-feeling black-and-red chassis, with a few extra touches, an emphasis on good audio (whether through the retuned speakers and subwoofer or re-engineered headphone jacks) and some custom software, plus a bundled pair of Beats headphones.

In the past this often meant you were paying a significant premium for not that much extra laptop over a non-Beats equivalent, as exemplified by the last model we reviewed, the HP Envy 14 Beats Edition. 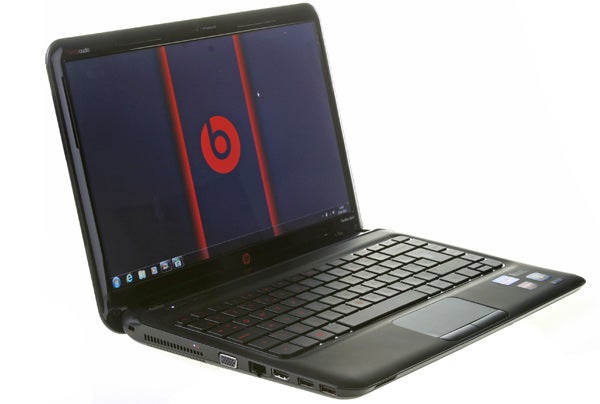 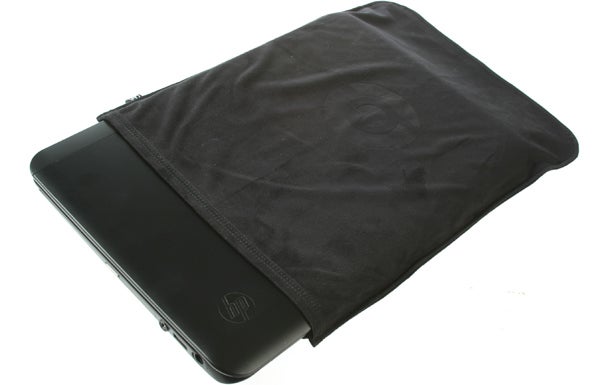 It’s worth noting that, unlike the Envy, Pavilion is not HP’s high-end line. So while you do get certain Beats niceties like red keyboard backlighting, other touches like the borderless display are absent. Thankfully this also results in a slightly lower price, with this Beats Edition coming in at a penny short of £900 from HP’s store in the UK.

Closed, the dm4-3000ea is classic Beats, with a plain matt black metal lid emblazoned with the stylish but overbearing Beats logo in red, and the HP one in glossy black. Fingerprints are still an issue here, but not nearly as much as on glossy plastic or metal like the original Samsung Series 9.

Opening the dm4 up, we’re greeted by an equally premium interior. We’ve always loved soft-touch finishes on laptops, and while HP hasn’t gone all the way (as Lenovo generally does on its ThinkPad line), the entire keyboard surround sports a lovely, almost rubberized feel that’s great to rest your hands on while typing. 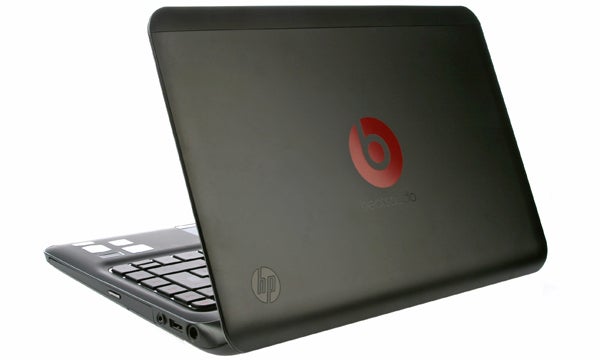 Unfortunately the screen’s bezel goes back to the glossy black plastic we love to hate. Certainly a layer of gloss can look great on certain devices, but here it just looks inferior when compared with the rest. The dm4-3000ea’s base sports a textured, almost sandpaper-like finish that’s hardwearing and provides a good grip.

Build quality is pretty good throughout, though there were one or two areas with just a little more flex than we would have liked. Overall though, this HP is both a highly attractive and well-made machine. 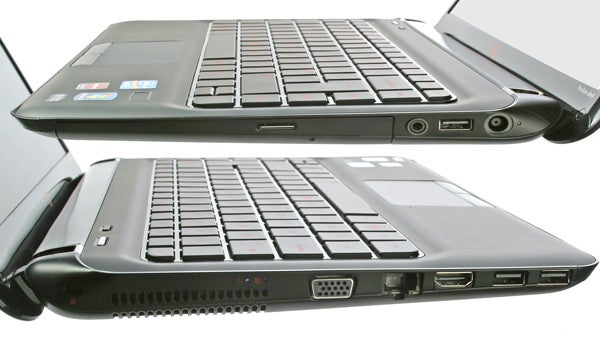 Connectivity is everything you might expect from a reasonably premium laptop. To the left, leading the charge are two (too) close-together USB 3.0 ports, followed by HDMI, Gigabit Ethernet and good old VGA. An SDXC memory card reader is discreetly incorporated into the front, while the right houses the tray-loading DVD writer (not slot-loading as on the Envy 14 Beats Edition), combination headphone/microphone jack, and a lone USB 2.0 port.

Wireless duties are handled by the usual Bluetooth plus Wi-Fi N duo with support for Intel’s WiDi wireless video standard thrown in for good measure, while an HD webcam rounds out the features. We would really have like a Blu-ray player at this price, but then not everyone would use one of these so it’s a fairly logical corner to cut.

While not quite on a level with Lenovo’s IBM-designed keyboards, HP laptops generally provide an excellent typing experience and the Pavilion dm4-3000ea Beats Edition is no exception. Though key feedback is quite shallow, there’s a nice click to the action and their slightly soft finish is a pleasure to use.

Layout and spacing are great, and though the function keys are secondary, this not only matches the intended market but can be switched in the BIOS. In classic Beats style, the entire keyboard is backlit in red, which really adds to the premium, exclusive feel. 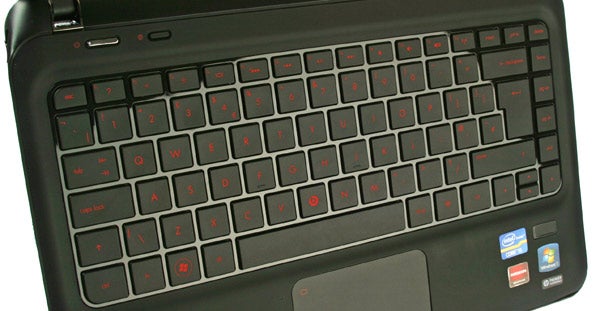 We’re not quite as happy with the touchpad. Even though it supposedly uses the same Imagepad technology as HP’s new Envy 14 Spectre for smoother swiping and up to four-finger navigation, it doesn’t feel quite as smooth or responsive, and (due in part to having physical buttons) it’s a tad on the small side.

However, compared to your average touchpad it holds up well enough, with its comfy semi-gloss buttons offering a defined click. We’re also very fond of HP’s touch-disabling switch: rather than being a secondary function key as with most rivals, simply tap twice in the pad’s upper left corner to enable/disable it. 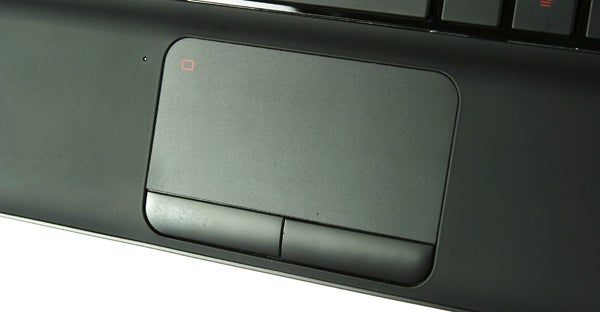 The Pavilion dm4-3000ea’s screen is 14in (yes, the chassis is 15.5in) with a typical 1,366 x 768 resolution and glossy, reflective finish. Unfortunately, it’s also fairly typical when it comes to image quality for a TN panel. Though it’s quite vibrant and blacks are deep with reasonably even backlighting, contrast falls a little short, with this dm4 unable to distinguish some of the subtler dark shades in our greyscale test. It also suffers from average viewing angles. Horizontal viewing was actually decent enough, but vertically the screen was very sensitive to contrast shift, so you need to tilt it just right. 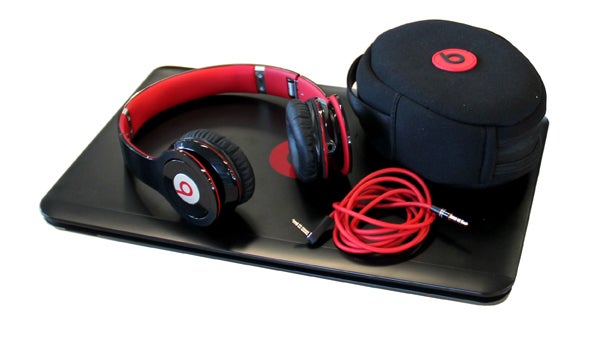 Naturally, one of the biggest selling points for any Beats-branded product will be its audio. The speakers on the dm4-3000ea Beats Edition hold up reasonably well but really don’t justify the hype. While they manage relatively rich and warm reproduction, they distort at their (admittedly reasonably impressive) maximum volume.

And then there’s the bass. With ‘Beats’ processing disabled, the only way to describe the dm4-3000ea’s speakers is ‘tinny’. Turn on the Beats magic, and suddenly you have a far richer sound with a bit of low-end oomph.

Quite frankly, it’s a little difficult to see why the option to turn it off is there at all; rather than Beats enhancing what’s there, we can’t help but suspect the speakers are actually crippled when it’s turned off, which (if true) turns the whole thing into a marketing trick of the most cynical kind. Worse, even with Beats enabled, this dm4 can’t quite match the likes of the Toshiba Satellite P750 in the bass department.

Of course, it could be argued that having superior speakers is already impressive, and that the bundled pair of Beats Solo HD premium headphones will help ease all audio concerns. While we weren’t particularly enamoured of the Beats Solo cans, on a quick listen these did perform better – we’ll bring you our definitive verdict in the full review soon.

The Pavilion dm4-3000ea BE’s general performance leaves us with few complaints. Its Intel dual-core ‘Sandy Bridge’ Core i5-2450M CPU runs at a default speed of 2.5GHz but can clock up to 3.1GHz and supports up to four virtual cores. While not up to the quad-core Core i7 CPUs found on HP’s Envy line, it won’t break a sweat in most tasks, whether it’s gaming or productivity. It’s backed by the usual 4GB of RAM, expandable to 8GB.

Our only disappointment is the hard drive. Not only would we expect a hybrid SSD/HDD at a price this close to £1,000, but to add insult to injury the 500GB drive is a slow 5,400rpm model. In other words, neither the capacity nor performance says premium, and along with the lack of Blu-ray drive this seriously dents the Beats Edition glamour. 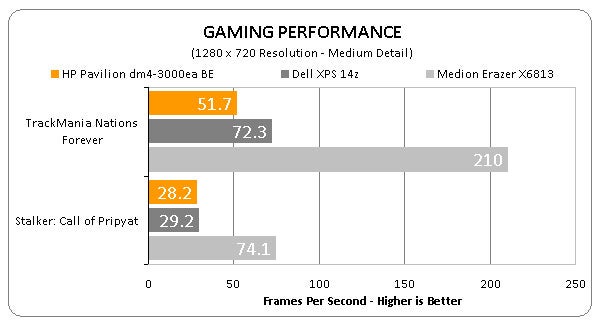 Thankfully we’re back on track with graphics, where the usual Intel integrated effort is aided by an AMD Radeon HD 7470M with 1GB of dedicated memory. This is hardly a gamer-worthy card but it will let you play lots of titles if you can live with a few compromises. For example, Stalker: Call of Pripyat was just about playable at 720p and on medium detail, managing a 28.2fps average. The 7470M also does a great job of video processing and (supported) software acceleration.

Surprisingly, where the dm4-3000ea Beats Edition truly excels is in longevity. Its 11.1V 62Wh battery managed just over seven and a half hours in our low intensity test ofgeneral productivity with wireless radios disabled and screen brightness set to 40 percent. That’s certainly near the top of the 14in-and-upwards laptop class, and with careful use this little beast should just about last you through a working day.

Value is where this HP trips up. As with most of the company’s Beats Edition machines we’ve looked at, there’s a significant premium to those svelte black and red looks. Dell’s XPS 14z is its premium 14in offering completely in aluminium, and for the same money gets you 8GB of RAM and a faster, larger hard drive. 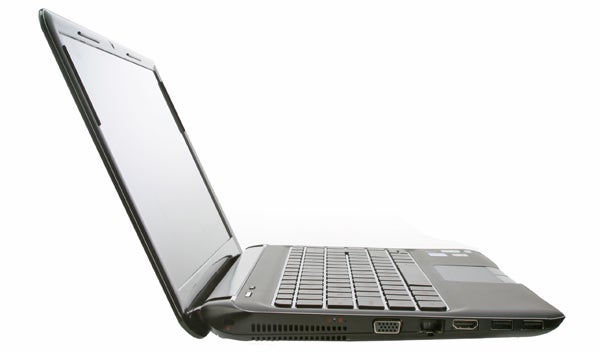 That’s not taking into account the value-add of the Beats Solo HD, which are worth around £120. If you were planning to buy some anyway, the Pavilion dm4-3000ea’s price drops to £780, which is a lot more manageable and actually decent value for its looks and features. The slow hard drive is still a niggle, but if you’re savvy enough you could always replace it with an SSD yourself.

However, if you’re happy to go with a machine that’s a little more ordinary on the outside you can get a lot more on the inside, with similarly-specced laptops from the likes of Acer, Asus and Lenovo (without metal lids or backlit keyboards) going for around £550. Just don’t expect them to last quite as long away from a socket. 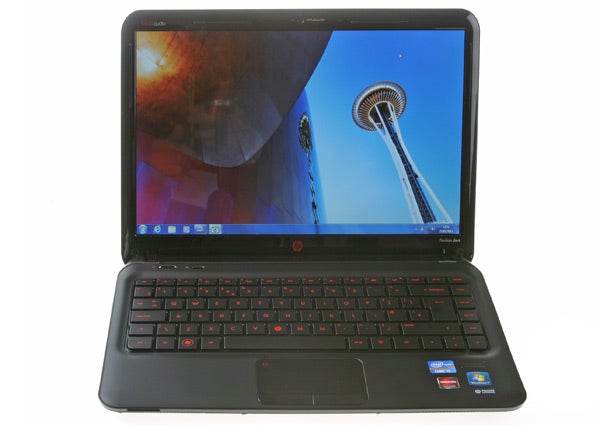 If you were planning on getting a pair of Beats Solo HD headphones, HP’s Pavilion dm4-3000ea Beats Edition is worth considering for its style, good speakers, comfortable ergonomics, decent battery life and unique red keyboard backlighting. However, if you already own a premium pair of cans, you can get more laptop for less elsewhere.