Affordable ultra-portable laptops are the in thing at the moment. Intel and Acer started the ball rolling last year with the Acer Aspire Timeline systems, including the outstanding Aspire 1810TZ (winner of our Best Portable Laptop award last year), but HP and AMD also teamed up to produce the promising (yet ultimately flawed) HP Pavilion dv2. Now the two have joined forces again to produce the HP Pavilion dm3-1020ea we’re looking at today. And, though it’s available with Intel power as well, the dm3 is proof positive that AMD might finally have a platform that can compete with Intel’s.


While the dm3 is in fact larger than the dv2, based as it is on a 13.3in display vs. the 12.1in of the dv2, the shared lineage is clear to see. The dm3 has the same alluringly slim chassis and elegant lines that instantly drew us to the dv2; it’s just a bit larger and, at 1.9kg, heavier.


It’s prettier, too. Gone is the ghastly reliance on glossy black plastic; in is a chic-looking brushed aluminium adorning both the lid and body of the machine. It combines with the still glossy black bezel and faux-chrome trim to great effect, making this a machine that looks and feels a good deal more expensive than the £540 it’ll set you back. It’s a class act. 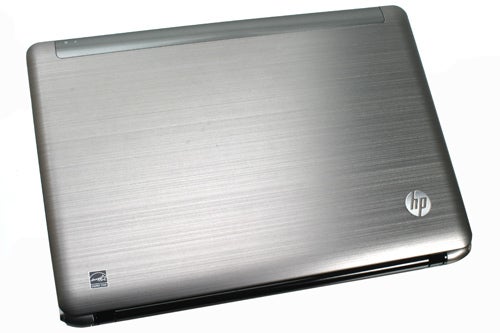 This design prowess is matched to a decent sounding spec. Directing proceedings is a dual-core AMD Athlon Neo X2 L335 CPU running at a decent 1.6GHz. It’s backed up by a plentiful 4GB of RAM, ATI’s capable Mobility Radeon HD3200 integrated graphics and a zippy 7,200rpm, 320GB hard drive – all good signs that the dm3 will perform well. And, despite the chassis being too slim to house an integrated optical drive, HP is kind enough to provide an external 8x DVD Re-writer drive in the box. It has LightScribe support as well, allowing you to burn disc labels using the drive. 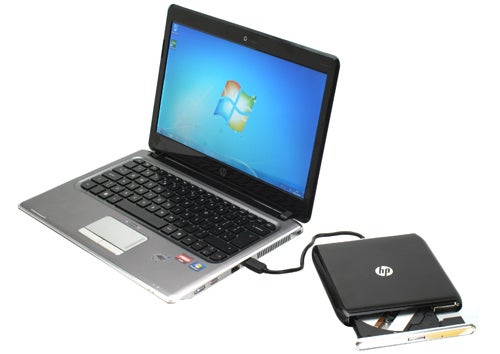 Not everything is as we’d like, though. Network connectivity is restricted to slower 10/100 ‘Fast’ Ethernet and Wireless-G Wi-Fi, as opposed to the Gigabit and Wireless-N Wi-Fi oft demanded these days, though Bluetooth is at least included. Whether the dm3’s lacklustre network speed matters is up for debate. Many ordinary users probably won’t see the problem, but those with more demanding tastes might baulk at these restrictions.

General connectivity, on the other hand, is good enough. It might lack niceties like eSATA or standby powered USB ports, but the dm3 has HDMI and VGA for video and a total of four USB ports – a good number for a portable machine like this. These are joined by a memory card reader, audio jacks for headphones and a microphone, and the Ethernet port.

All these ports are neatly integrated, with none jutting out or looking unsightly. Somewhat unusually the sliding power switch resides on the right edge, accompanied by a wireless radio toggle button. Other shortcut buttons of note include one above the touchpad for deactivating it, while the Caps Lock, mute and scroll lock keys all have small LED indicators next to them – all thoughtful touches.

Lifting up the slim yet sturdy screen reveals the now near-ubiquitous isolation (chiclet, tile, island – call it what you will) keyboard. It’s not backlit (an unrealistic demand at this price), but it is among the best examples of such a keyboard we’ve seen. First of the all the layout is outstanding. Half-height cursor keys ensure a large and unimpeded right-Shift key and everything else is just as it should be. It’s also nice how the top row of keys default to their shortcut action, giving you quick access to volume and playback controls alike. 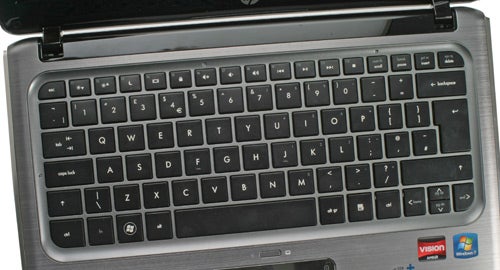 It’s really the key actions that impress, however. There’s nary a hint of flex and the keys strike the perfect balance between lightness of touch, feedback and depth, making typing on the dm3 a rare pleasure. It’s a stark contrast to the keyboard on the similarly priced and specified Medion Akoya E3211, our experience of which is best analogised as typing on a suet pudding…


Similar plaudits can’t be made of the touchpad. It’s not bad by any stretch, but its smooth finish offers an odd tactile experience and is plagued by fingerprints and greasy smudges. Compared to the rest of the machine such blemishes are something of an eye-sore. This finish is repeated on the buttons as well, though they do offer pleasing and reliable feedback. 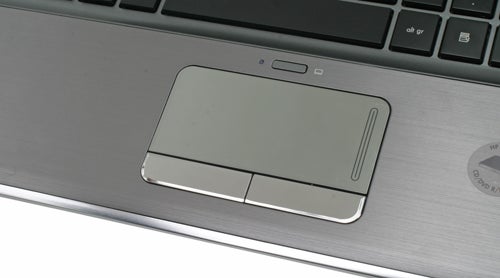 As a general rule one doesn’t expect a multimedia feast out of ultra-portable laptops, particularly those of a cheaper orientation, but the dm3 doesn’t fair too badly. Or, at least, its display doesn’t. Viewing angles are good enough, albeit quite shallow by some standards, but its contrast and richness give photos and films plenty of depth, even if it can’t resolve some of the finer details.


Audio, on the other hand, is lacklustre. Produced by two speakers tucked beneath the front-edge of the machine, it’s only really sufficient for the occasional online video clip. Both volume and clarity are so poor that you’ll always be reaching for your headphones or a speaker cable.

From a purely subjective point of view, performance is very good. HP has had the sense to install a 64-bit version of Windows 7 Home Premium, making good use of the 4GB of RAM available. Moving in and out of applications is snappy and responsive, no doubt aided by the faster than usual 7,200rpm hard drive. Only very intensive tasks cause a problem since the low-voltage CPU isn’t best suited to HD video editing and similar tasks, but photo editing isn’t a problem. HD video playback on the other hand is handled fine, with 1080p MOV’s playing smoothly with around 10 to 40 per cent CPU usage. YouTube HD flash video plays okay, too, though our Internet connection was the limiting factor in testing the higher bit-rate iPlayer HD. 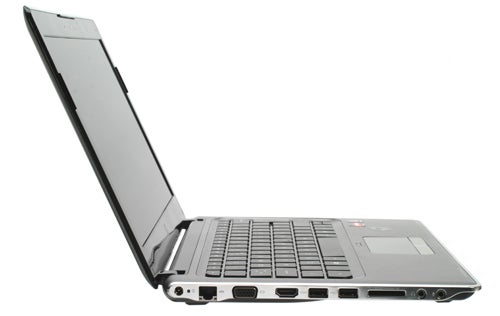 It’s a similar story in our benchmarks. While the dm3 is bested by the Intel-powered Acer Aspire 1810TZ and Samsung X520 in PCMark Vantage, it’s only by a small margin and the HP even holds an advantage in some tests, particularly the HDD and gaming tests. Indeed, if you do fancy some ”very” casual gaming, then the dm3 is your best bet. In TrackMania Nations it managed a reasonable 18.2 frames per second, over double the Acer. This doesn’t make it a gaming system, but there’s a little more headroom there if you don’t mind making some compromises – at the very least you’ll be able to play some old classics.

Battery life, traditionally a problem for AMD, is good as well. Admittedly, both the Acer and the Samsung come out on top, but the HP has a larger screen and a lower capacity 57 Watt-hour (5,026mAh) battery than the Acer, so the four hours and 51 minutes of productivity is a good result. Even with little power saving you should be able to get a solid four hours or so of Internet browsing out of this machine.


Our only remaining comment about the dm3 is that, in common with the dv2, it does run warmer than we’d normally expect. It’s nothing like as toasty, or noisy, as the dv2 was and when we say ‘warm’ we mean exactly that, it’s still perfectly comfortable on your lap. All the same, compared to Intel powered systems – which tend to run very cool – the dm3 does produce more heat. 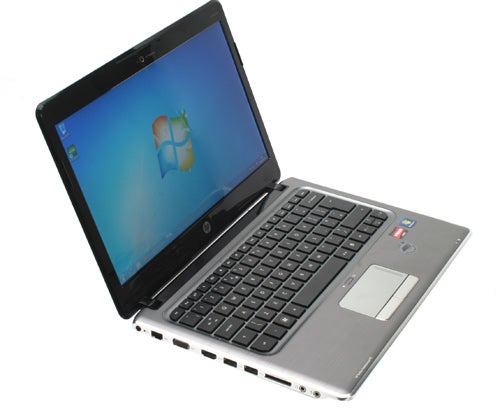 
Were it not for the somewhat sluggish network connectivity, we’d probably award the Pavilion dm3-1020ea a 9/10. All the same, it still gets a Recommended Award thanks to outstanding design, decent performance and a keyboard whose quality belies the affordable asking price. Anyone in need of a flexible, portable laptop will find the dm3 an excellent servant.

While the HP is out performed slightly by the two Intel-based systems, the difference is marginal and the AMD system holds an advantage in some tests. Overall performance is very good, with the fast hard drive having a particularly beneficial impact on performance.

This is no gaming machine, but it’s more so than similar laptops with Intel integrated graphics, which should help should you decide to indulge in some casual or retro gaming.

A larger screen and smaller battery ensure the Acer Aspire 1810TZ outperforms the the HP, but just short of five hours is still a very good result. Unless you must have all-day battery life, it’ll do nicely,