Straddling the line between laptop and netbook, budget ultraportables like the Lenovo X121e are a great option if you’re looking for something that does the basics and does them well. Unlike actual netbooks, little budget laptops like this can handle HD video playback and offer HD Ready screens, usually at 11.6 inches – a little larger than traditional 10in netbook affairs. This is exactly the kind of creature HP’s Pavilion dm1 is. 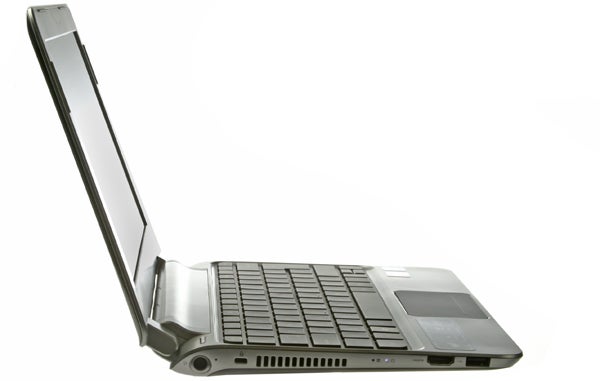 Based on AMD’s Fusion processors, in this case the dual-core E350, backed by up to 4GB of RAM (3GB is standard) and a 320GB hard drive while running Windows 7 Home Premium, specifications will be adequate for the daily needs of the majority of users. Price hovers between £300 and £400, though the cheapest we could find it at the moment was £375.

When it comes to style, the Pavilion dm1-3200sa seems to be suffering from dissociative identity disorder: on the one hand it wants to display the elegant touches of a classier, premium ultraportable (like curved sides and white LEDs for power and status), while on the other its cheapness becomes obvious the moment you examine it closely. 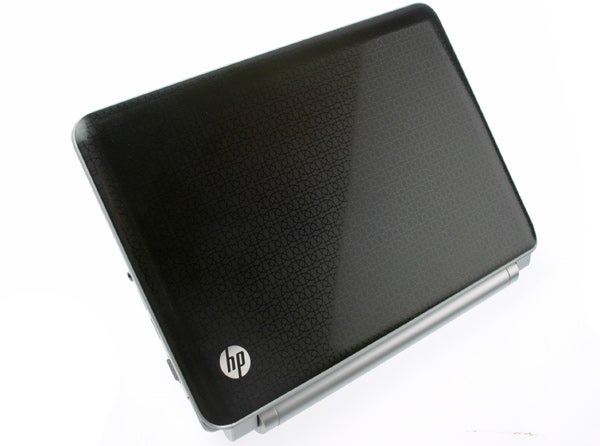 The lid at first appears to be the kind of glossy affair we love to hate, but as it turns out it’s actually far more resistant to fingerprints and smudges than most of its ilk and its unique pattern is reasonably attractive. Unfortunately things deteriorate from here. First off, the dm1-3200sa is rather bulky, tapering to a thickest point of over 3cm. It’s also quite heavy for a non-rugged 11.6in machine, at 1.56kg.

Opening the laptop up reveals a silver inside finish that attempts to give the impression of metal but fails miserably. It’s especially distracting on the bezel, which is already fairly large to begin with and is made to seem even more so by this finish. The black keyboard and touchpad look like they’re parts of a different machine altogether. 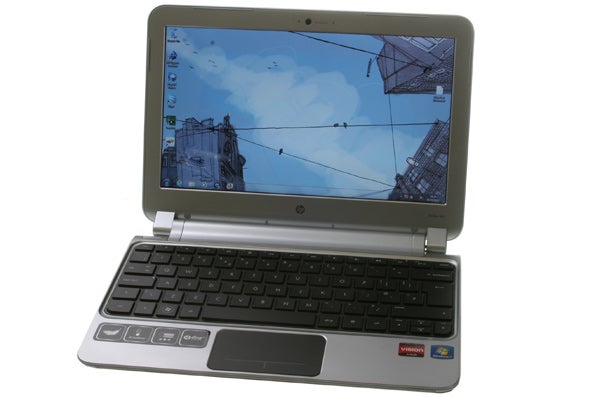 Build quality is decent, yet relative to the brick-like Lenovo X121e it just feels a bit Fisher Price, which is especially disconcerting when you remember that they weigh the same. We hope the Pavilion’s heavier battery will make up for the difference by lasting longer (a reasonable expectation as HP claims a whopping nine hours maximum!). To sum up, the dm1-3200sa isn’t unattractive or poorly constructed, but neither is it especially attractive or sturdy.

Connectivity is what you would expect on a sub-£400 machine. Along the dm1-3200sa’s left we have a USB 2.0 port and HDMI, while the right houses an SD card slot, headphone/microphone jack, twin USB 2.0 ports and VGA.

Hidden behind a flap at the end is Gigabit Ethernet, which is a nice if somewhat unnecessary touch considering most consumers probably use Wi-Fi. Wireless credentials include the usual Wi-Fi N and Bluetooth. The obvious absentee here is USB 3.0, which you really don’t find on too many budget laptops (the Acer Aspire 5750 being a notable exception).

Usability is a bit of a mixed bag, though overall this little Pavilion holds its own. The chiclet keyboard offers well-spaced matt keys and a good layout. There’s very little travel to them, but despite this shallow feedback, keys offer a nice click. 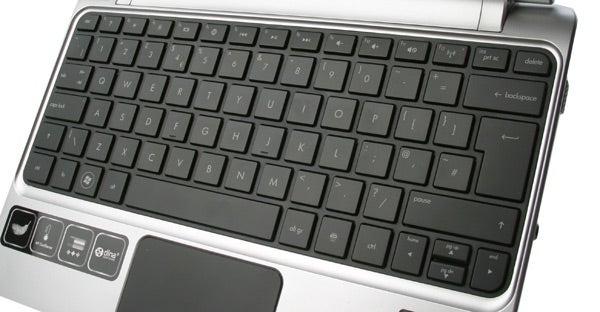 Niggles include the sharp edge of the palm-rest which can make it uncomfortable to rest your hands (depending on angle), and a slightly loose, rattling sound to a few keys – though thankfully there’s little flex. While typing on this laptop is pleasant enough, it doesn’t hold a candle to the experience provided by the superb Lenovo X121e, which really shows how keyboards should be done.

The touchpad, meanwhile, is small but responsive, and its smooth surface feels great. Unfortunately it’s the kind of buttonless affair we’re seeing ever more of, and with a slightly stiff right-click this is far from the ideal implementation. However, if you’re a tap-to-click kind of person this is a non-issue. 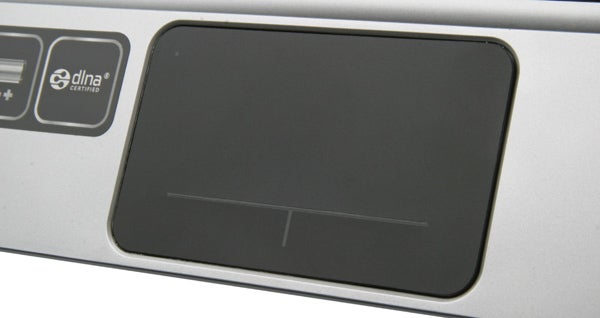 Getting to the 11.6in screen, we have a fairly standard glossy, 1,366 x 768 TN-based affair. Viewing angles are as poor as ever, with strong contrast and colour shift when not positioned centrally. However, under ideal conditions the display holds up surprisingly well, with vibrant colours and singularly impressive dark detailing; the dm1-3200sa effortlessly resolved every shade on our greyscale without effort, and there was no light bleed or serious backlighting inconsistency. This means that as long as you tilt it right and watch alone, HP’s little Pavilion laptop provides a great visual entertainment experience.

Audio from the front-mounted Altec Lansing speakers is likewise impressive if you keep in mind this ultraportable’s size limitations. There’s practically no bass and it’s definitely inferior to the Harman/Kardons found on the Toshiba NB550D netbook, but the HP’s sound is nonetheless detailed and without noticeable distortion.

When it comes to internals, HP has gone the AMD route with its latest dm1. Specifically, you’ll find a netbook-class, dual-core E350 CPU which runs at 1.6GHz and will outperform a similarly-specified Intel Atom (even if it doesn’t come close to its rival’s Core i3).

On the graphics front there’s an even larger difference between Intel and AMD, with the integrated Radeon HD 6310 being a more accomplished contender than Atom’s solution. This means that if you keep detail settings and resolutions (very) low, quite a few games will be just about playable. In the undemanding and older TrackMania Nations Forever, for example, the E350/6310 combo managed a smooth 29.9 average. At the same time, even casual gamers may still be frustrated by the lack of performance here.

The CPU and GPU are backed by a slightly unusual 3GB of RAM, with a 5,200rpm, 320GB hard drive taking care of storage. General productivity runs fairly well, as long as you don’t multi-task too much.

Considering you can get plenty of better-looking 11in AMD Fusion-based ultraportables for the same money as this HP, we’re hoping the dm1-3200sa’s battery life is where it will prove itself worthy. Though it doesn’t live up to HP’s nine-hour claims, it fares well against the competition, managing six hours and ten minutes on 40 percent screen brightness and with wireless radios disabled. 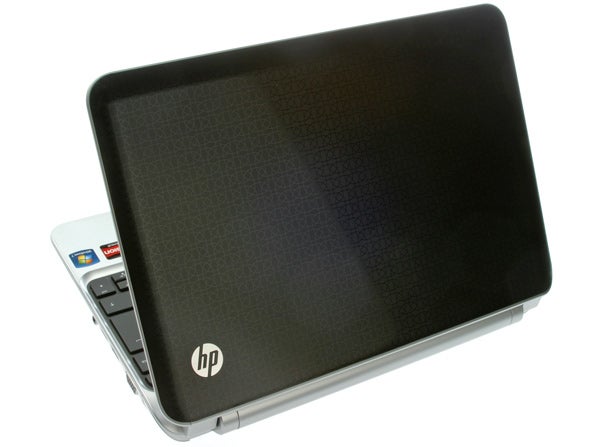 Still, we can’t help but feel that being able to stay away from a socket just a little longer than most isn’t enough to save it from being outclassed and outgunned by newer alternatives, especially if you’re happy to move up to 13.3in. Even if 11 inches is what you’re after, the Lenovo X121e is vastly superior in most respects, making it well worth the extra pounds (you can currently get a Core i3 version with 4GB of RAM and a six-cell battery for just £420).

[Note: we’re aware this model dm1 is reaching the end of its lifetime and is no longer sold by HP directly, but it can still be found from third party retailers and pre-owned, and we also wanted to review it in preparation for its successor which should be with us soon.]

HP’s dm1-3200sa is a decent enough ultraportable or high-end netbook let down by its somewhat discordant design and screen’s poor viewing angles. At its current price point of around £375, it’s worth spending a little more to get far superior alternatives.