If you’re after a large, no-frills laptop then the Pavilion 15-au072sa definitely fits the bill. At the time of writing it’s available for just £399.99, yet packs in the latest Intel processor technology and has plenty of features.

Specifically, you get a 15.6-inch display with a resolution of 1366 x 768 pixels, plus a DVD drive, a 1TB hard drive and a claimed 9 hours of battery life. It could be the ideal back-to-school laptop for anyone heading off to university, or for those who simply want a cheap laptop that’ll last a good few hours away from a plug socket.

It’s not perfect, though; the compromises made for a budget machine are clear from the outset.

This being a cheap laptop, you don’t get anything too clever in terms of design – it’s not thin or light or made from premium materials. However, the pearlescent white casing and the striped pattern on the inside look rather fetching, and they’re nicely contrasted by the chromed hinges and black screen surround. 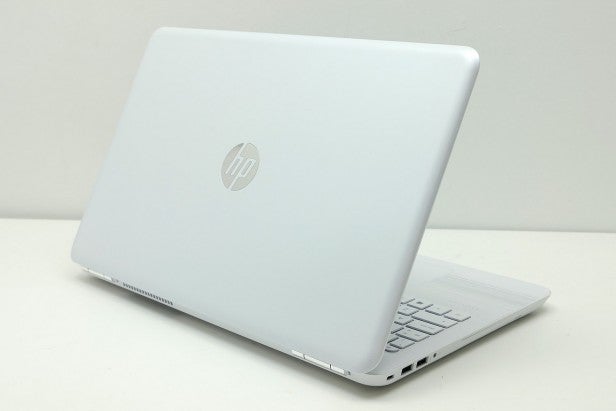 White will show the dirt more readily than darker alternatives – especially when it comes to finger grime on that keyboard – but it’s a fact of life that a laptop is only ever as clean as its owner. If you make a little effort to give it a wipe down every once in a while, there’s no reason it shouldn’t remain looking nice for a fair while.

Build quality is OK for a machine of its calibre. There’s definite flex in the body, but it doesn’t protest when picked up by just one corner, which is a classic point of failure for larger laptops like this.

For features, you get plenty of connectivity, with three USB ports (two USB 3.0, one USB 2.0), a full-size HDMI, Ethernet network port, an SD card reader and a combination headphone/microphone socket.

Inside you also get the latest wireless technologies, with 802.11ac Wi-Fi and Bluetooth 4.2. What’s more, you get a DVD/RW drive, too. Ever more laptops are ditching optical disc drives these days, so if you still listen to CDs or watch DVDs, you’re in luck here.

Crucial to the appeal of this laptop is its CPU, which is of the latest generation of Intel Core i3 chips. The Core i3-6100U isn’t the fastest around, but it should deliver good performance while using less power than previous generations, making for longer battery life.

This is all backed up by a perfectly adequate 8GB of RAM and a 1TB hard drive. The hard drive will be slow compared to the SSDs found in more premium laptops, but it’s all you can expect at this price and you get plenty of storage space – many SSD-equipped laptops only offer 128GB.

This being a large laptop, there’s plenty of room for a full-size keyboard, including a numpad. It’s nothing special, but it offers a generally decent typing experience, with the keys giving a nice, precise response and there not being too much flex and wobble as you type. My only slight gripe is that the layout is US-style, with a wide Left-Shift, squashed Enter key and a few symbols moved around. 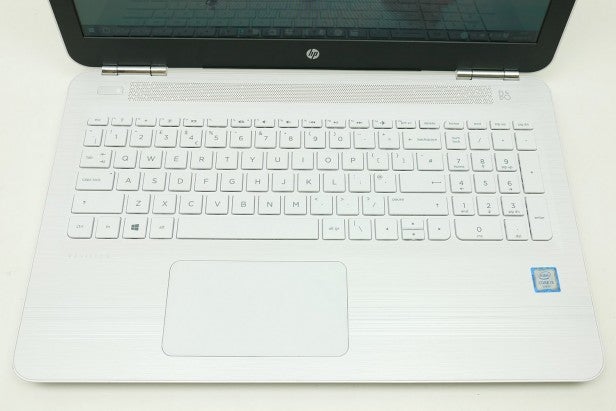 If you’re used to proper UK layouts it takes a moment to work out where some keys are, but if this is your daily machine then you’ll soon get used to it. At least it has a ‘£’ symbol, unlike some laptops that ship with actual US layouts.

As for the trackpad, it’s perfectly decent. It’s nice and large and has a smooth-gliding surface. The click action is a bit wishy-washy, but it’s still responsive enough not to be an annoyance.

The 15-au072sa has a modest screen, to put it nicely. Its resolution of 1366 x 768 is low by today’s standards, though it does make for an easy-to-read display that’s good for those who maybe struggle to see the smaller icons and text on some laptops. It just means you can’t increase that resolution and get a bit more desktop space when needed, and those with better vision will crave more pixels.

The quality of the display is also pretty poor. It’s not too bad in terms of looking off-colour or grainy or anything quite like that, but viewing angles aren’t great – this is only a TN panel rather than IPS – and its glossy finish catches reflections.

Straight-on (middle), the screen looks OK, but quality reduces quickly when viewed from an angle

Fire up a movie and it’s clear that contrast is pretty low, too, with everything either looking dark and dingy or washed out and grey, depending on the angle you’re viewing it at, with no ability to show bright whites and deep blacks at the same time. Indeed, testing with a colorimeter it reported a pathetic 430:1 contrast ratio – less than half that of more premium laptops.

Maximum brightness is also just 232nits, which is about 100nits less than the best laptops and generally makes this display not ideal for use in bright sunlight.

All this said, such poor-quality displays are typical of laptops at this price, so plenty of alternatives fare little better. You only need to jump to something like the £479.99 HP x360 15-bk062sa to get a vastly superior screen, though.

As for the speakers here, they’re equally bad. The B&O software trickery can drag a little more life out of them, but they’re just too weak and tinny to be of use for anything other than whisper-quiet levels of listening and maybe cranking the audio for the odd YouTube clip you want to show your mates. Thank goodness for that headphone jack.

The Intel Core i3-6100U processor at the heart of this laptop means it copes admirably with any day-to-day computing tasks. You can happily have loads of tabs open in your browser, have Outlook open, Spotify running in the background and much more, and it will hardly pause for thought. Anything a bit tougher, like gaming or editing video, will benefit from more horsepower, but otherwise you’re good to go. 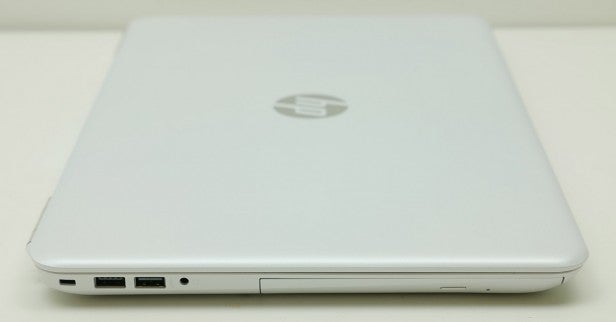 However, that mechanical hard drive does make booting and loading of apps and games much slower than SSD-equipped laptops. Once you’re used to the speed of SSDs it’s hard to go back, but if you’re still used to hard drives it won’t be an issue. Plus, if you have loads of large files that you don’t want to store in the cloud, its 1TB capacity will be very welcome.

What’s more, you get that pretty decent performance while also getting good battery life. You won’t get close to HP’s claims of 9 hours unless you drop the screen brightness to stupidly low levels, but at a sensible level of around 100-150nits (60-80% brightness) this laptop lasted 6 hours and 47 minutes on one charge. Certainly not record breaking, but just about enough that you could get away with not taking the charger in for lectures for a day. 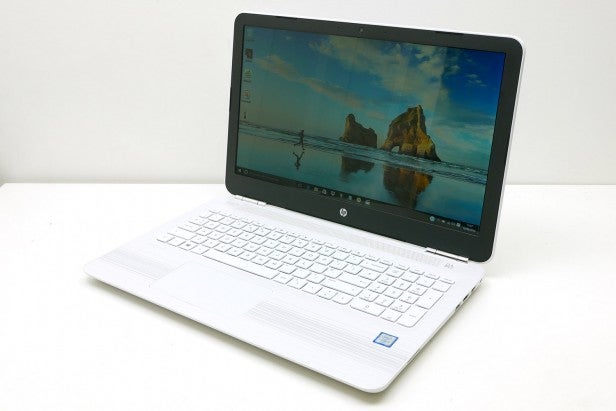 This is a perfectly adequate laptop for those on a tight budget who just want a really basic device for day-to-day computing, and who also want the reassurance of decent performance and battery life.

However, it does suffer from the fact that those needs can be met by plenty of other laptops for even less money. A quick browse online reveals plenty of similar machines for £300 or less. They might have an hour shorter battery life and slightly older, slower CPUs or less attractive designs, but not by much, and they’ll still do the job.

Combined with the fact that the HP’s display is particularly poor, you have a device that’s struggling to rise above the crowd. It’s certainly not a bad machine, but it’s not exactly a bargain.

A decent enough option for budget buyers, but cheaper options offer the same basic experience and you only need spend a little more to get a much better screen.

This review unit was supplied by Currys.