The HP Pavilion 15 is a sturdy, stylish laptop that’s available at a decent price. It packs a lot of performance under its silver bonnet, while featuring a sharp 1080p display and decent capacity SSD. However, battery life is a letdown for those working on the go.

The HP Pavilion 15 has so much on offer that you could argue it’s punching above its weight as a mid-range laptop.

It comes packing a powerful fourth-gen Ryzen mobile chip from AMD, while also seeing some decent design features and a plethora of ports.

And while it may not look as classy as a Dell XPS 13, or have the sheer grunt of the new Macbook Air, it still might just be worth a look if you’re searching for a bargain.

That price makes it more expensive than the likes of the Lenovo Yoga Slim 7 and Microsoft’s Surface Laptop Go. This puts it firmly in the frame for consideration for those who have some money to spend.

One of the first major things to note about the HP Pavilion 15 is that it doesn’t really look like a mid-range office laptop. With its sharp edges and cool silver styling, you might be forgiven for thinking it’s designed for gamers, just without the RGB glam.

It sports an attractive, understated look, with a modern and pleasingly thin bezel that still manages to hold a 720p webcam for all your video conferencing needs. Build quality is sturdy, comprising mostly of aluminium to ensure this device could withstand a drop.

The Pavilion 15 weighs noticeably more than the majority of its rivals at 1.75kg, yet it’s still just about portable enough to sling in a bag and carry around a university campus. 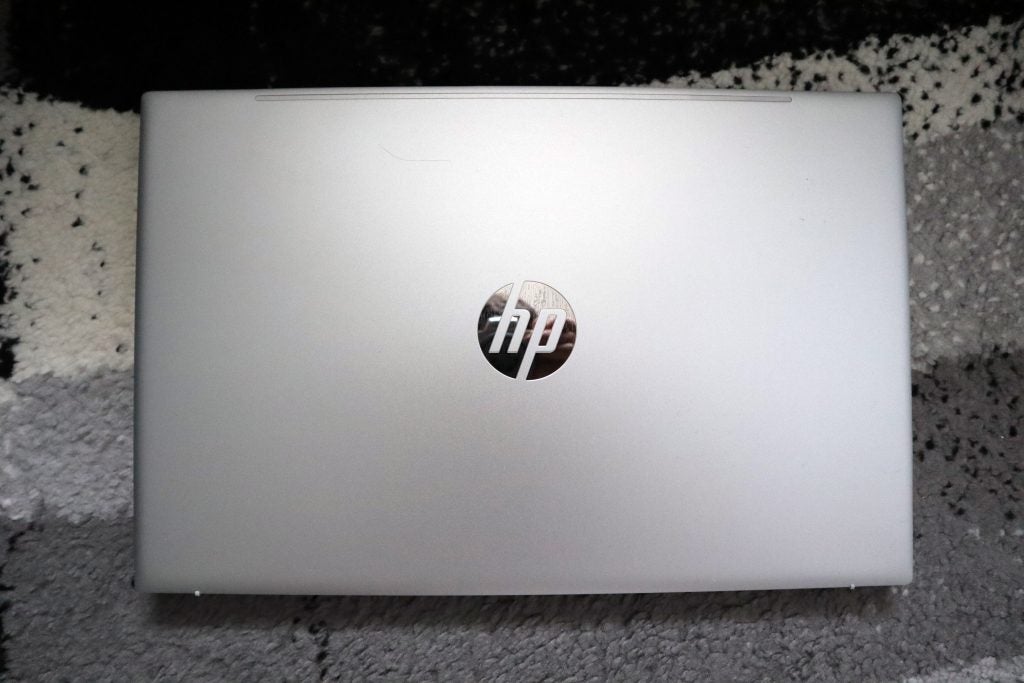 HP has decided to opt for a  touchscreen setup with this laptop; but the Pavilion 15 isn’t a convertible laptop, so bending back the hinge will only cause damage.

The company also partners with B&O in a bid to give this business-class laptop some nicely balanced audio performance. In addition, the speakers are mounted on the laptop’s underside at an angle, which means sound won’t be obstructed by your desk.

Even with the Pavilion 15 being quite a slim bit of kit, HP hasn’t skimped for port allocation. The laptop comes with two high-speed USB-As, a Thunderbolt 4/Type-C port, as well as an HDMI-out, a headphone jack and micro-SD card slot, providing plenty of compatibility. It’s nice to see older ports being included in a market where sometimes USB-As and HDMIs have been ditched altogether. 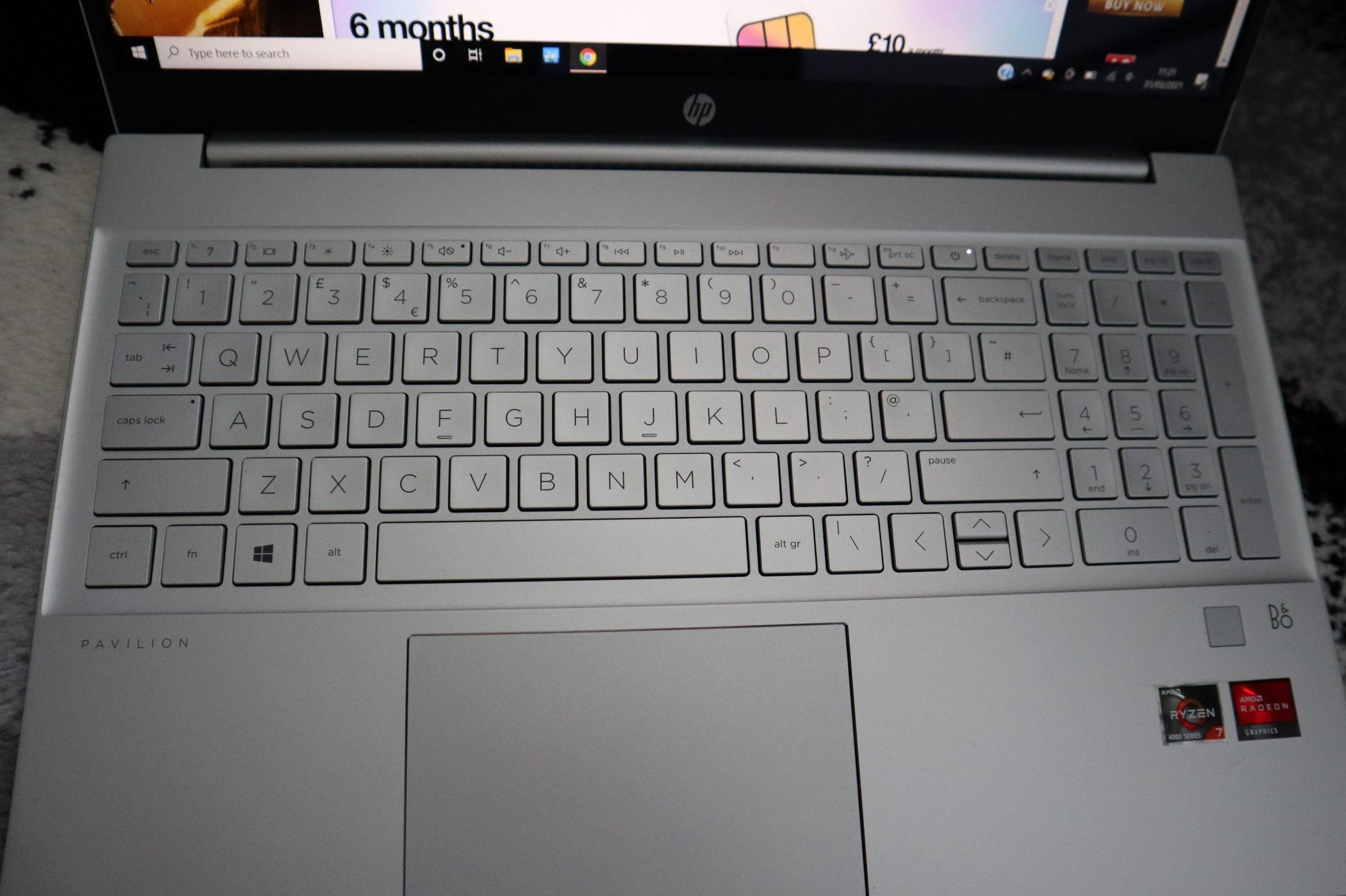 There’s also some welcome support for Windows Hello included through the small fingerprint reader, just below the keyboard’s dedicated number pad, and it’s within easy reach for when you need to use it.

The keyboard is nicely tactile, smooth and responsive, which makes a difference to some of the more compact laptops out there. However, one thing to note is that it isn’t backlit, meaning it might not be the best option for working after the light fades.

The Pavilion 15’s trackpad is almost MacBook-like in size, offering your fingers plenty of travel. It’s pleasantly smooth and tracking is accurate, with some pretty firm and responsive buttons.

Display – A 1080p display with some nice colours

In watching a few different shows on Prime Video and using it for some web browsing, the screen is bright and colours are nicely vibrant. Viewing angles are also pretty good – although, with a classic 16:9 aspect ratio, I can’t help but feel HP is behind the curve. Most modern Ultrabooks run a 16:10 ratio, which is better suited for website viewing. 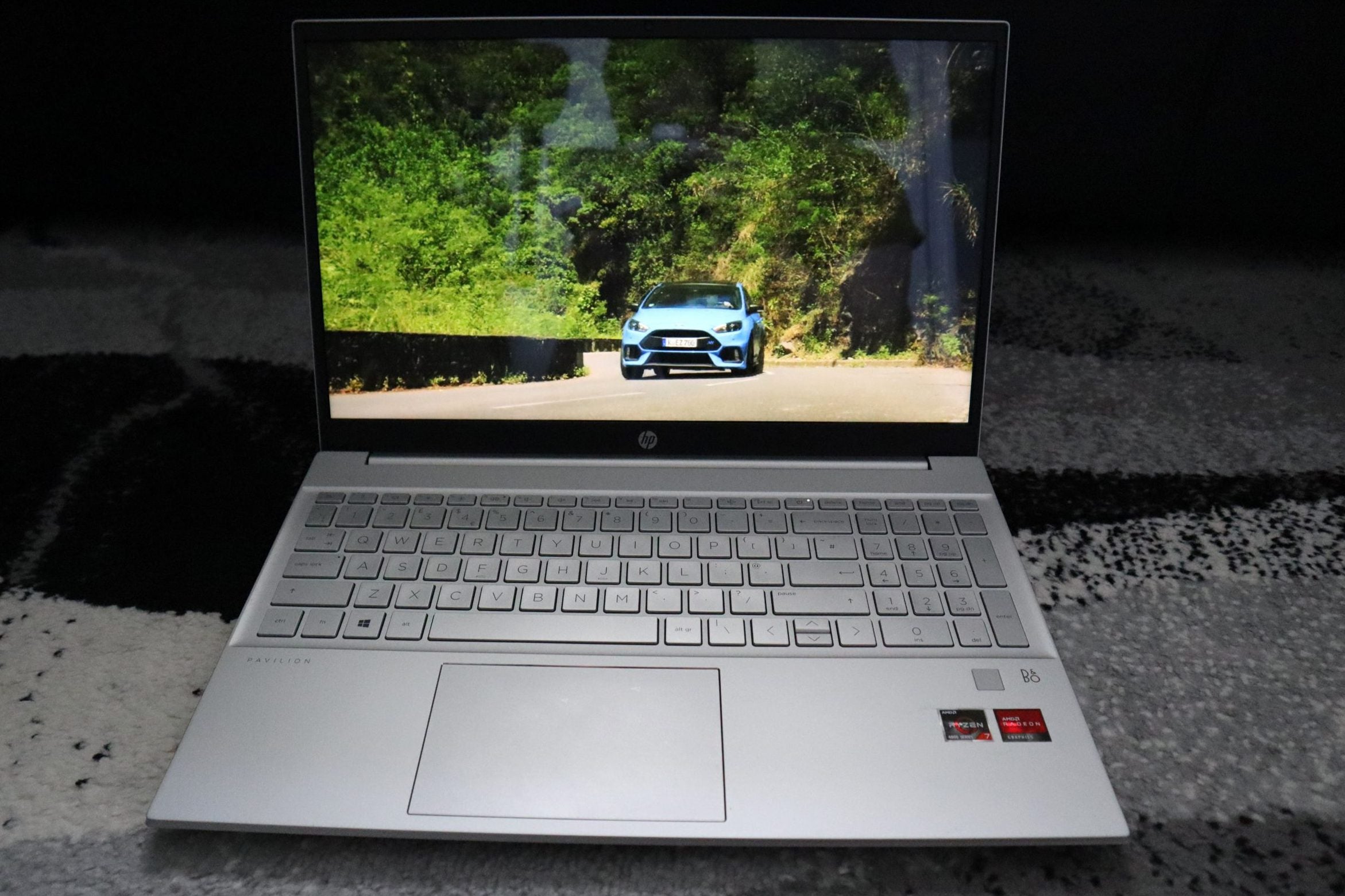 The biggest downside of the HP’s screen is brightness. HP claims a peak brightness of 250 nits, which falls short of the 300-nit average expected from laptops. In my own experience browsing the web and watching video, the brightness here is okay for indoor use, but isn’t really sufficient for uber-bright sunlight, presenting quite a glossy screen in some levels.

The HP Pavilion 15 packs a fourth-generation processor, with the specific 15-eh0014na configuration on test here featuring the Ryzen 4700U. This is a similar chip to the one featured in the Lenovo Yoga Slim 7, and more powerful than what the Surface Laptop Go offers – which certainly helped this laptop to serve up some surprising and rather promising results in the benchmarks.

It garnered some high-riding scores in PCMark 10 and the Geekbench 5 multi-core test, placing the Pavilion 15 even higher than some of the more premium and expensive Windows Ultrabooks such as the Dell XPS 13. This goes to show the performance boosts that a Ryzen processor can bring to the table, as well as the gains from a decent capacity of RAM.

Even having a load of Chrome tabs open didn’t cause the 15-eh0014na to falter when browsing, and it’s certainly up to the task of breezing through any coursework or any urgent deadlines that might need to be met.

There’s even the option to indulge in some light gaming – although don’t expect to go too crazy. It manages to work well on less-intense titles such as Minecraft, but loading up a massive Football Manager database proved a bit too much.

The 15-eh0014na’s 512GB SSD is pretty standard for Windows laptops at this price, and its capacity is plenty for day-to-day working. That being said, SSD read and write speeds of 1633 MB/s and 922.7 MB/s fall behind the competition, making it comparatively sluggish to save and load files on the physical drive.

The benchmarks demonstrate that the HP Pavilion 15 is a laptop punching above its weight when it comes to performance. Unfortunately, the same can’t be said for its battery life.

In reducing the brightness to 50% and using PCMark 10’s benchmark that simulates office work, the  HP lasted around seven and a half hours, which is practically the figure HP quotes (seven and three quarters). 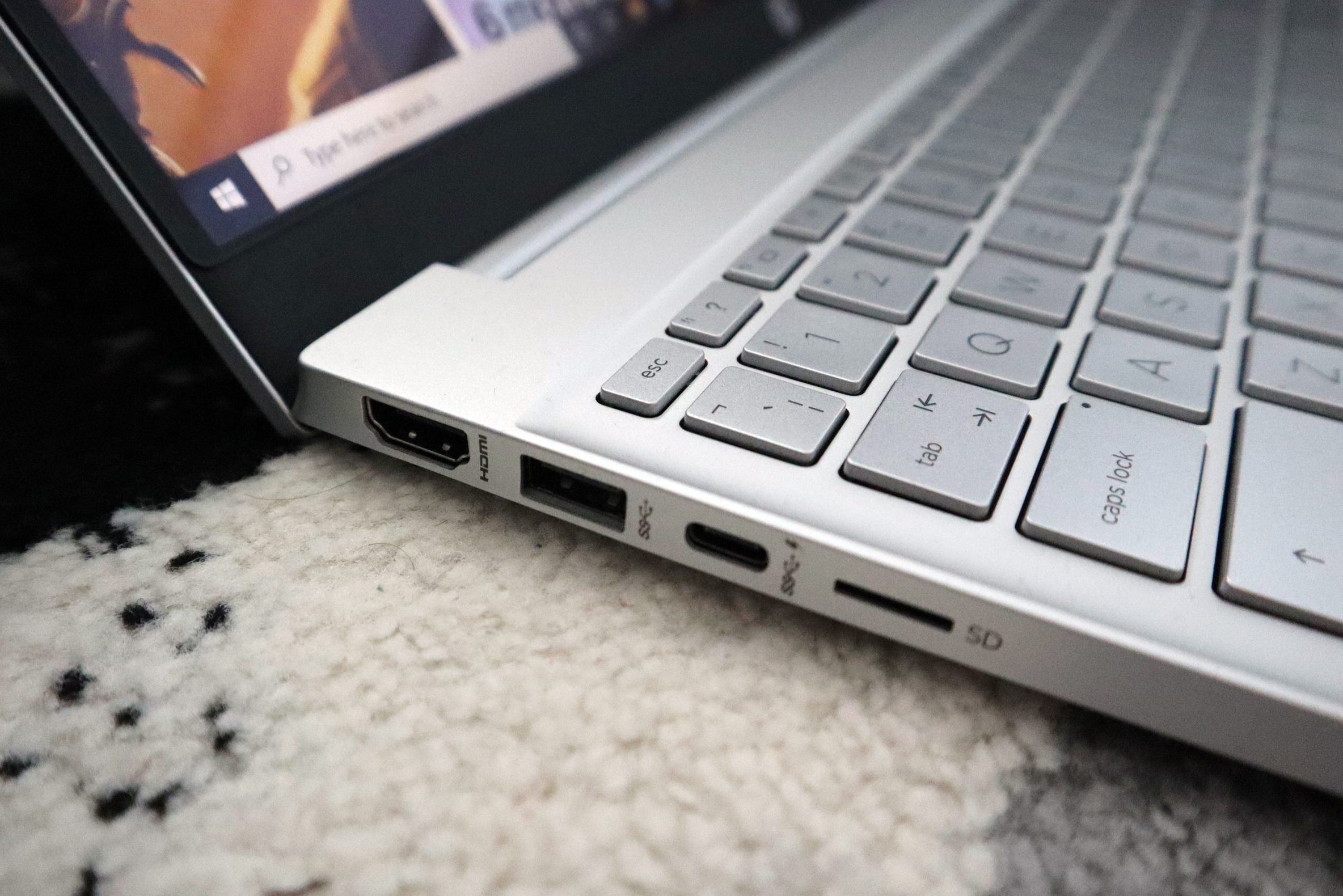 In comparison to the competition, the Pavilion 15 doesn’t stand up well. Lenovo’s Yoga Slim 7 lasted 14hrs 39mins, and our favourite budget Windows machine, Microsoft’s Surface Go, made it to 8hrs 45mins.

However, benchmarks are only one side of the story; in real-world testing, the 15-eh0014na comfortably lasted a working day before requiring the big charge back up to 100%.

The HP Pavilion 15 is a well-built and classy-looking mid-range laptop, with a tactile keyboard and decent port selection. It also offers some nicely balanced speakers and Ultrabook levels of power at a cheaper price than most of the competition.

However, with its slightly dim display and sub-par battery life, the Pavilion doesn’t perform as well as the convertible Lenovo Yoga Slim in everyday use. That said, for those wanting to add a bit of style to their office setup, this is a pretty good option.