The HP Omen Photon is a good wireless mouse. For the money, you're getting something that's fully customisable with a great sensor and DPI range. That said, some of the competition is cheaper and more proven, so while the Photon does look a great option it only really stands out for its ambidextrous design

The HP Omen Photon is a new gaming mouse that supposedly offers a wireless performance just as good as wired mouse.

Priced at £139.99 though, it’s not cheap and looks to compete with the likes of the Razer Basilisk Ultimate and Logitech G502 Lightspeed, so has an awful lot to deliver in order to be a worthwhile alternative.

At the very least, HP’s focus on making an ambidextrous design makes this mouse more inclusive than most, and doesn’t leave left-handers out in the cold.

There’s no doubt the HP Omen Photon has a high quality look and feel. Its overall construction is a mixture of brushed and smooth plastics, which complement each other nicely. Indeed, all the materials used make it feel like you’re getting something worth the high price.

It’s a little bit on the heavier side, negating the need for added weights which don’t come in the box. However, some other features more than make up for this. 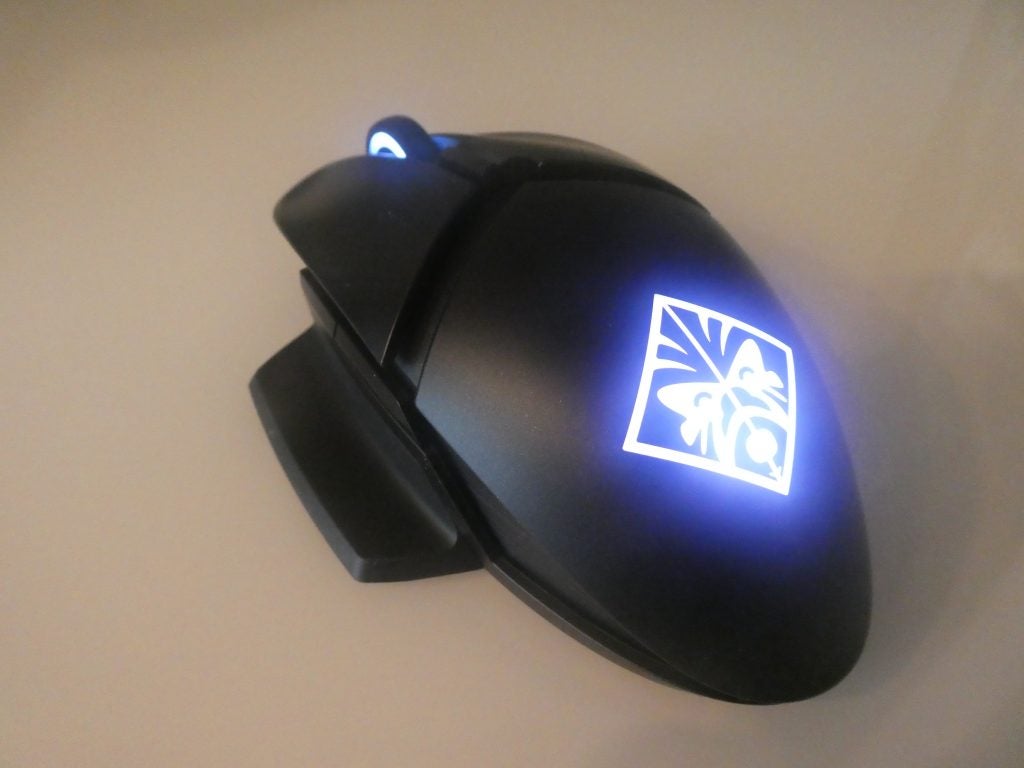 One thing that’s really noticeable about the Photon is its ambidextrous design – able to be used by both right and left-handers alike.

The magnetic side pods the Photon features make it fully usable for people with different dominant hands, which give it a lot of mouse-based clout. This broadens the customer base on HP’s part, and means the prayers of left-handers who can’t find a proper gaming mouse have been answered.

There’s a whole host of programmable and swappable buttons, but unlike a lot of the mice at this price point, the buttons and side grips on both sides are magnetic and incredibly easy to swap over. In addition, the 11 programmable buttons are tactile and responsive to touch, which only adds to the top class design.

In testing the Photon, it was a case of seeing if the PixArt PAW3335 optical sensor stood up against the likes of Logitech’s Hero or Razer’s Focus+. With a DPI of 16,000, it’s certainly up there with the competition, and for day-to-day use, it works perfectly.

HP’s choice of optical sensor really has paid off here. The 16,000 DPI option offers great sensitivity even for competitive gamers. Rivals such as the Razer Basilisk Ultimate see the sensitivity go up to a whopping 20,000 DPI, beating out the Photon by a distance, but that’s honestly excessive. When playing a few FPS games at 16,000, the Photon felt supremely responsive. 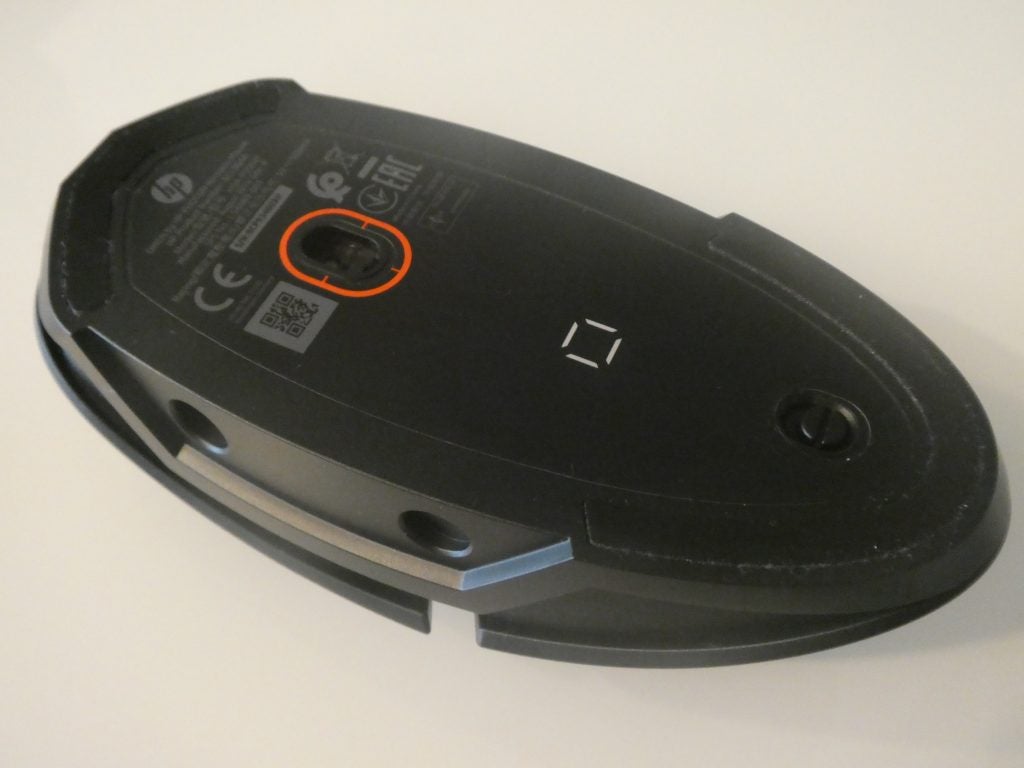 HP’s choice to use a PixArt sensor with 16,000 DPI has certainly paid off

When compared with the likes of Razer’s Synapse 3 or Logitech’s G-HUB software, I’m disappointed to say that the HP Omen Command Centre falls short.

One plus for the Omen Command Centre is the simple ability to programme functions onto the Photon. It’s a simple mapping process, which isn’t something to be sniffed at, and just makes things really easy.

Additionally, there’s options for programming in formats designed specifically for having the grips on the right or left hand side, as well as having them on both sides with all buttons available – giving another point in HP’s favour over the competition.

But unlike its competitors, the options for lighting are rather limited, with only two programmable lighting zones, compared to Razer’s 14 on the Basilisk Ultimate. In addition, while the lighting looks crisp, it only features three presets – ‘Colour Cycle’, ‘Breathing’ and ‘Blinking’. There is the option to tie the lighting to the DPI level too, which can be adjusted on the fly thanks to two buttons on the top of the mouse, which is a nice touch. 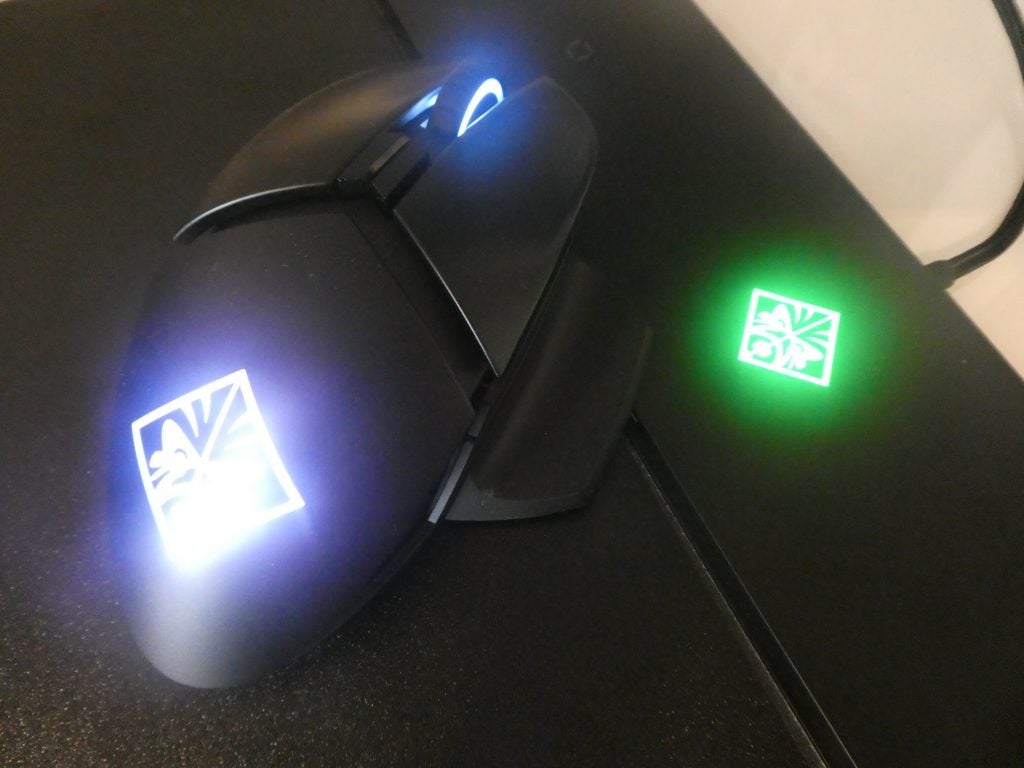 The Photon’s backlighting is certainly crisp

Should you buy the HP Omen Photon?

However, at the high £139.99 price it’s entering a very competitive market with the likes of the Razer Viper Ultimate and the Logitech G502 Lightspeed currently the best high-end wireless gaming mouse options. The HP Omen Photon has very similar specs to these mice, but doesn’t really any advantages over the pair beside that ambidextrous design.

But if you’re already invested in the HP Omen ecosystem, then the HP Omen Photon is still a fantastic wireless gaming mosue that easily justifies its steep price.

The HP Omen Photon is a good mouse. For the money, you’re getting something that’s fully customisable with a great sensor and DPI range. That said, some of the competition is cheaper and more proven, so while the Photon does look a great option it only really stands out for its ambidextrous design.