Most printer makers have two ranges of inkjet printers running in parallel, one aimed at the home photography enthusiast and the other at small and home-office customers (SOHO). HP’s Officejet Pro 6830 is a mid-range printer in the latter category and is surprisingly well equipped for a machine costing well under £100. 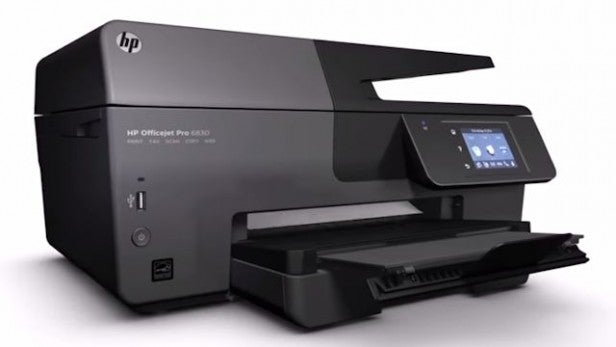 The grey and black casing has a slight stealth-bomber look to it and the automatic document feeder (ADF) far from being built into the bodywork, like some of its rivals, has been made a feature of the design. Slung underneath this, at a permanent slope, is a touchscreen control panel, with a good sized, 63mm LCD and several dedicated touch buttons. 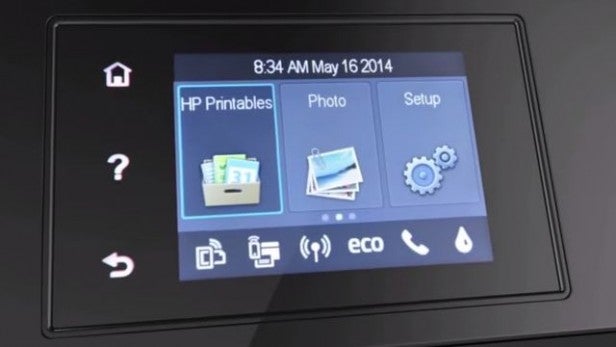 At the opposite end of the front panel is a USB socket which can be used to scan to, or print files, from a USB drive. Sticking out at the bottom is a single paper tray, which can take up to 225 sheets. Paper feeds from here onto a telescopic output tray above, but when fully extended, it increases the depth of the printer quite considerably.

The Officejet Pro 6830 can be connected through USB, Ethernet or wireless, with the wireless option offering direct connection for mobile devices as well as for remote printing, through ePrint.

The four separate ink cartridges clip in under the scanner bed, when you fold that up out of the way and are available in standard and XL capacities. The printer is eligible for InstantInk, HP’s subscription ink service, where you pay for a set number of pages per month. A page counts, no matter how much is covered, and a duplex page counts as two pages of ink.

We’re undecided about Instant Ink for SOHO inkjets. It can represent very good value if you print a lot of photos, where there’s high ink use, but for business, with typically small amounts of text on a page, it may not prove that cost-effective.

HP claims the Officejet Pro 6830 can manage 18ppm mono and 10ppm colour. In our tests, which measure from pressing Print to the last page arriving in the output tray, we saw 10.7ppm on our five-page mono test. This rose to 13.8ppm, around three quarters of the rated speed and a good throughput.

The five-page text and colour graphics printed at 4.6ppm, which is less than half the spec and a 20-page mono document printed duplex gave 7.1 sides per minute, which is fair, slowed only by the drying time between printing sides.

Photos of 15 x 10cm took between 1:04 and 1:13, which is a good speed. The quality of the prints doesn’t suffer either, as they are as well-detailed and colours are natural. They are a bit dark by default, though, so deeper hues in images can veer to black, but can be compensated for in software. 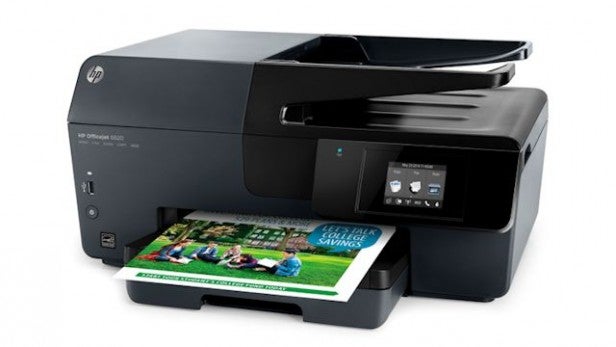 Black text is clean and sharp, near laser quality. Colour graphics on plain paper are also very clear and bright, though we did notice slight banding in some colour fills. While colours were also well reproduced in copies, fill textures became a little ragged in places.

Using the best prices we could find for the high-yield cartridges, the page costs are 2.3p for a mono page and 5.6p for a colour one. These are low compared with the page costs from similar printers. The Epson WorkForce WF-2650DWF, for example, has page costs of 3.6p and 11.0p, respectively, while the £70 Canon PIXMA MG5650 has costs of 2.6p and 6.6p. 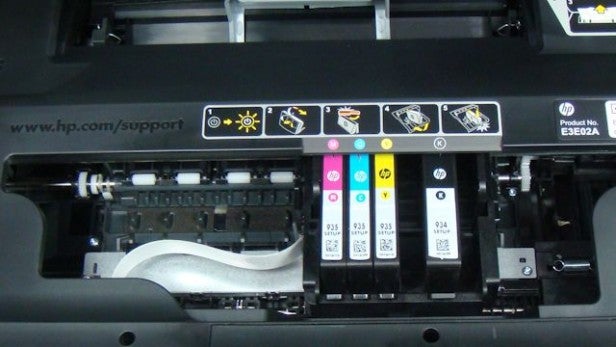 Comparatively low-cost SOHO inkjets aren’t hard to find and the Brother MFC-J5320DW, as well as the Epson and Canon printers already mentioned, are competitors. The Brother has a single-sheet feed as well as occasional A3 print. The Canon doesn’t have an ADF, but is around 12 per cent cheaper, while the Epson has higher print and scan resolution, but a smaller, mono LCD.

The HP Officejet Pro 6830 is a good, general-purpose, SOHO inkjet all-in-one. It’s neatly designed and prints fast, though print quality isn’t quite up to HP’s normal standard. It’s versatile connection options make it a good machine for a wide variety of different applications.