Most people think of HP’s OfficeJet range of printers as all-in-one machines. While most of them are, the range is actually about inkjet-based printers of all types and the H470 is a mobile single-function printer. Based on a similar technology to HPs dedicated photo printers, but with a separate black cartridge as well as the tri-colour one, the OfficeJet H470 can run from mains or battery and through USB, Bluetooth or WiFi.


In fact, the base model, reviewed here, doesn’t include a battery, which is a lithium ion clip-on option, or either of the wireless connections, which are made through plug-in, flash-drive-style adapters. What you do get is a neat, dark grey and silver unit, about the size of one of the Duchess of Cornwall’s handbags – rather bulkier than the Queen’s…err, we would estimate. 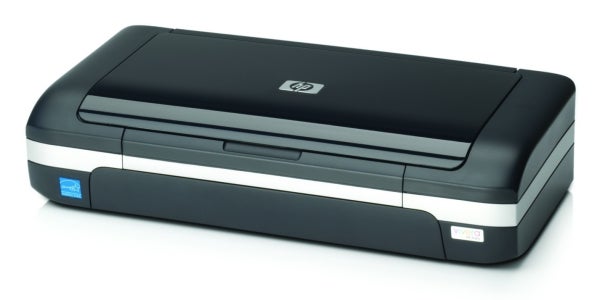 To start using the printer you must lift the lid to create the paper feed tray, while the front cover drops down automatically when you switch the printer on. There’s a second top cover, hidden by the first, which reveals the two ink cartridges, one black and the other tri-colour.


The control panel is very simple, with buttons for paper feed and to cancel a job, as well to switch the machine on and off. There are three indicators, for low ink in either cartridge and for paper jams. On the left-hand side is a USB socket for the optional WiFi or Bluetooth adapters and a second for SD and multimedia cards. At the back are sockets for a USB 2.0 PC connection and a PictBridge camera. 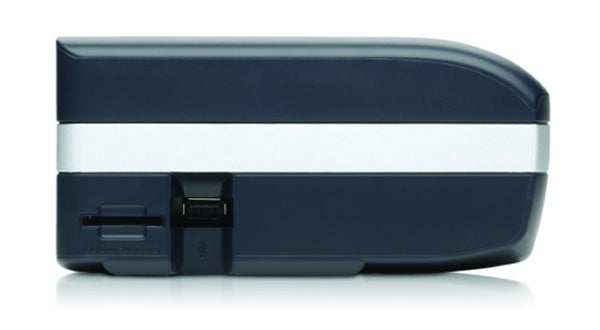 Setup with a PC takes the usual form of running the software CD and connecting the USB cable, when instructed to. If you want to make connection via either of the wireless options, you follow separate instructions, as you do if you want to connect the optional battery pack, which clips onto the back of the printer.


The two ink cartridges slip into their holders on the head carrier and are unusually awkward to fit in the right position. Although there are diagrams in the setup sheet, it’s quite fiddly to get them in at the right angle and push them up into place.

You often have to make do with sub-standard print when looking at results from a portable printer, but not here. Text print from the OfficeJet H470 is clean and with little spread into the fibres. Even small font sizes only show slight fuzziness around the edges.


Colour graphics are also clean and areas of solid colour fill are dense and generally free from stripes or other artefacts. Photo prints are well reproduced, with very little visible colour dither across varying colour tones and high levels of detail in both fully lit and partially lit photos. Colours are generally natural and photo prints are well up to the standard of HP’s dedicated photo inkjets. 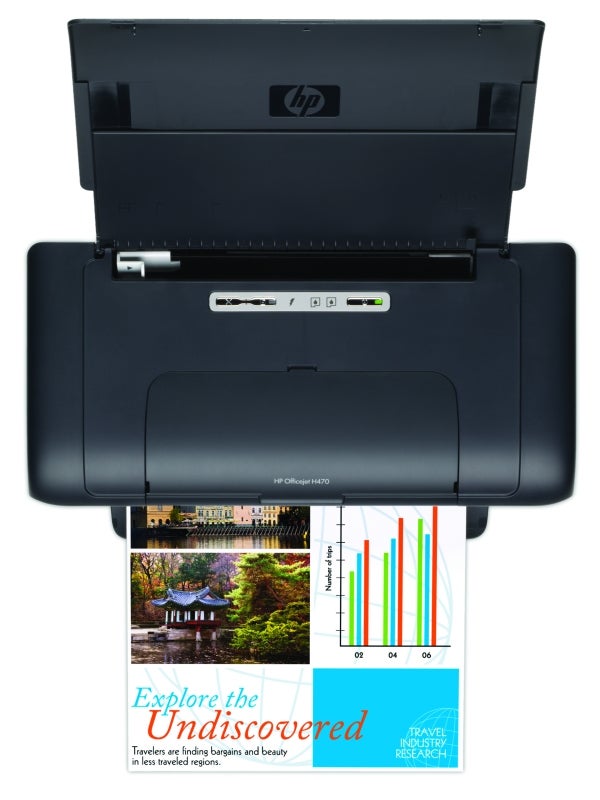 HP quotes print speeds for both black and colour of 1.5ppm. This is a cause for true amazement in the TrustedReviews team, as the speeds we saw were better in both cases in normal print mode. Our five-page, black text print completed in 59 seconds, giving a speed of 5.08ppm, while the colour text print, although taking longer at 2:07, still gives a real world speed of 2.36ppm.


We’re not sure what the world’s coming to when printer makers start quoting speeds which are not just realistic, but underestimate what their printers are capable of. The best 15 x 10cm photo print time we measured was 1:27, which compares favourably with, for example, the Photosmart A826, a dedicated photo printer which in best print mode, like the H470, took 1:35 for the same print.


The only costs in running the printer are the ink cartridges. They appear to be two nearly identical black cartridges, numbers 337 and 338, both of which are quoted as being 14ml cartridges and both of which seem to sell at approximately the same price. However, HP quotes the 338 cartridge as yielding 500 ISO pages, while the 337 yields only 440. Guess which cartridge we’d go for? 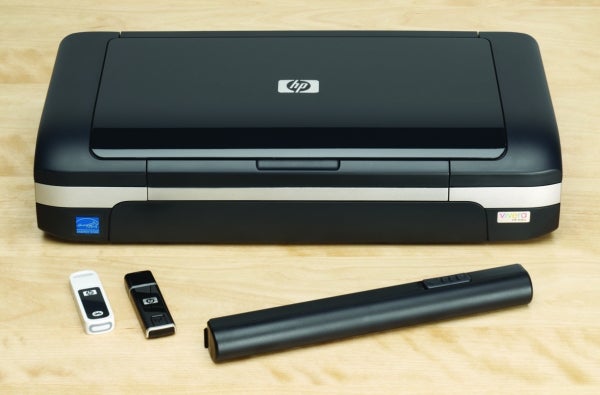 With the tri-colour cartridges, there’s a definite difference between the 343 and 344, with the 344 quoted as yielding 600 pages. Using the two, higher-yielding cartridges gives page costs of 3p for black and 5.87p for colour; both these are good for a colour inkjet printer, especially one intended for the portable market.


There’s quite a bit going for this diminutive inkjet printer, though surprisingly size is not one of its killer features. It’s easy to use and versatile if you opt for the WiFi or Bluetooth adapters and the lithium ion battery. It’s a bit surprising that as a portable printer the battery isn’t included as standard, but it’s equally surprising that running costs are no higher than a standard desktop machine and that speeds, while unremarkable, are both higher than HP’s claims.