Until recently, the only manufacturer making inkjet all-in-one printers that could handle paper larger than A4 was Brother. HP obviously thinks the market is now large enough for it to dip a toe in the water and has introduced the Officejet 7500A, which is an A3 machine. It’s not fully committed to the larger size, though, as it can only print to large paper sizes; its scanner is still restricted to A4.

This is another big, glossy black device, longer than normal because of the wider carriage. It’s also a funny mixture of shapes, textures and styles. At the top, its flatbed scanner has a 35-sheet Automatic Document Feeder (ADF) with an odd curve to its feed tray and another to its top. This sits on top of the main printer section of the machine has a slight backward lean at its left-hand end, and the left side appears to sit lower than the right. 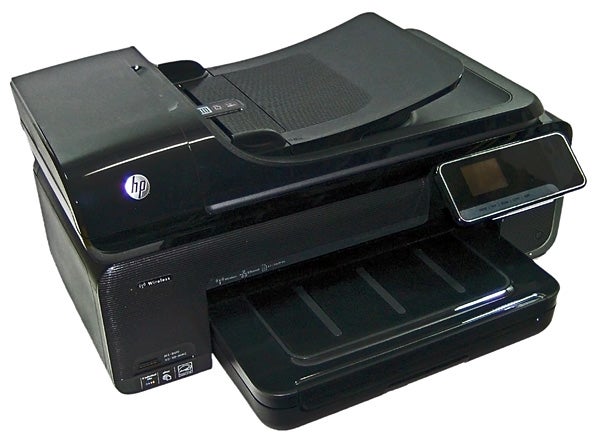 The printer has a horizontally textured front surface and the join between scanner and printer is interrupted by a wide control panel with touch controls and a 60mm LCD touchscreen.

Below the control panel is a wide paper tray, which can take paper from 15 x 10 cm, right up to 13 x 19in, but with no separate feed for photo paper. To accommodate the larger paper sizes, both the bottom and top halves of the tray telescope outwards, though the base and lid are not the same shape, which makes it look a little odd when expanded. To the left of the paper tray are two memory card slots, which between them take SD, Memory Stick and xD cards.

At the back are sockets for USB, Ethernet and low-voltage power from a separate power block, but the machine also supports wireless connection and push-button setup, if your wireless router supports this.

Software installation is straightforward, with OCR software and a photo-stitching editor from ArcSoft in the bundle. Being HP, the machine also supports ePrint, so you can print directly to the Officejet 7500A from phones, tablets and notebooks. There’s also a range of apps, which can be downloaded to the printer from the HP site.

HP quotes speeds in draft mode and in laser quality mode but not in the default normal mode, which is a bit inconsistent. Draft print is said to reach 33ppm in black and 32ppm in colour, which is more than a little optimistic. Our five-page text print in draft mode took 34s, with half this time spent pre-processing, before paper even begins to feed. This gives a true draft speed of 8.8ppm, little more than a quarter of the claim. 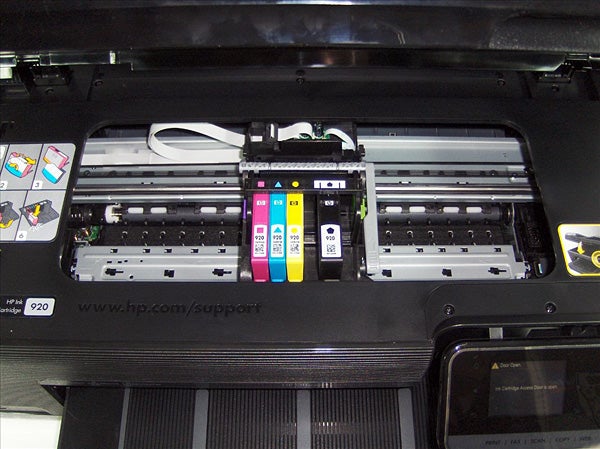 In normal print mode, the best speed we achieved was 9ppm for black print and 4.5ppm for black text with colour graphics. These speeds should have been faster than the 10ppm and 7ppm quoted for laser quality print. An A4 copy took 30s, a 15 x 10cm photo completed in 40s and a full A3 photo print took 3mins 30secs, which again lacks a certain urgency.

The print quality from the machine varies with what it’s doing. Text print is clean and sharp and draft mode text is very nearly as good as normal mode, while being a lot quicker to print. Business graphics are also well reproduced and colours are good and solid and hold up well in copies as well as direct prints. Black text copies are rather over-thick, though, and text looks almost bold. 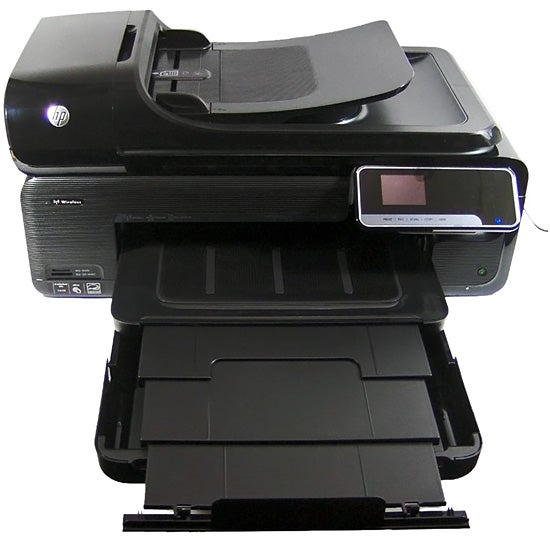 Top and bottom margins in A3 prints are wider than normal, at a good 20mm and we lost output from our standard test page, which rival machines reproduced without problem. Photo prints are fair, though colours can look a little soapy in comparison with some of the competition.

The OfficeJet 7500A uses four inks, with only black available in two different yields. Using the highest yield black for best economy gives an ISO black page cost of 2.3p and an equivalent colour page cost of 6.5p. Both these are average, without being outstanding and are not as good as from, for example, the HP Officejet 8500A.

For certain office applications, A3 and A3 print can be a definite advantage. Posters and folded A4 newsletters are obvious examples, though the lack of duplex print in the Officejet 7500A mitigates against folded documents. Even so, print quality is considerably better than from Brother’s A3 all-in-ones and the machine feels a lot more solid than they do.