We don’t often test two printers from the same manufacturer consecutively, but with HP’s OfficeJet 6000, it’s interesting to compare it directly with the OfficeJet 6500 Wireless, covered earlier this week. That’s because this is the single-function version of that Recommended all-in-one.


All-in-ones now far outstrip sales of single-function printers, so how does a simple printer stand up in this market? Its main selling points have to be simplicity of use, lower price…and smaller size.


This is a simple but stylish printer, finished in black and white with generous curves to all its corners. At first glance it appears to have a small footprint, but the output tray set into the lid of its main paper tray has to be extended, almost doubling its length, before you start printing. 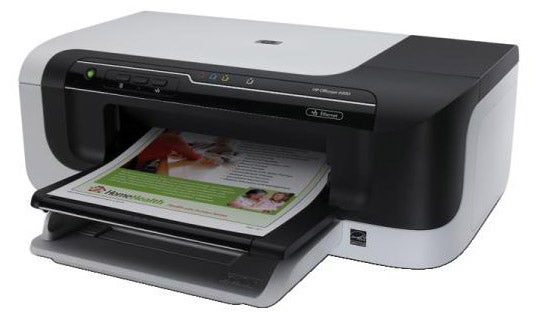 Controls and indicators are simple, with indicators for the four ink tanks and buttons for paper feed, job cancel and Ethernet connection, as well as a power button. There’s no duplexer to clip in at the back of the machine, though you do have to deal with the separate, black-block power supply.


Setting the OfficeJet 6000 up to print is straightforward, though it involves a lot of unwrapping. Each of the four ink cartridges has a twist-off seal, is shrink-wrapped and comes in a cardboard box and the clip-in print head comes in a separate plastic box. Once they’re all installed, the printer runs through a one-off charging cycle which takes about 10 minutes, but it still makes various pumping and squeezing noises before and during print jobs.


Software installation is long-winded for a machine where no scanner or photo management software has to be installed and it’s a shame you have to restart your PC to complete it. This shouldn’t be necessary for a printer driver.


Under test, we saw 7.32ppm for normal mode, black print from our 5-page test sample. This increased to 9.23ppm for the 20-page document, so it’s a bit quicker than in laser mode. Compared with the 6500, which recorded 4.16ppm and 8.97ppm in the same print mode, the 6000 is quite a bit quicker, though it’s not easy to see why, given the same inkjet engine and a very similar driver. 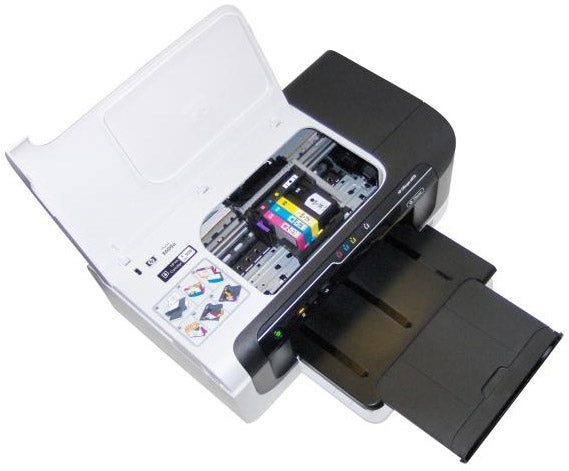 The 5-page colour document gave 4.55ppm on the 6000 and 3.90ppm on the 6500, so again a touch faster. Printing a 15 x 10cm photo in Best quality mode on this machine took 1:05 and just 38 seconds when all settings were left on automatic. The all-in-one took 51 seconds when set to automatic. Overall, this printer is consistently quicker than the all-in-one, though not substantially so.


The quality of the prints is much the same as from the OfficeJet 6500 Wireless, with crisp, but not exceptionally sharp text characters and bright colour graphics. Block graphics are a little light and there’s some ink-run when black is laid over colour. Registration is good, though.


When it comes to photo prints, the OfficeJet 6000 can print in Best mode, where you set the print resolution and paper type, or left to print automatically, where its senses the paper you’re feeding and adjusts the image accordingly. There was very little difference in our two test prints, though the Best mode print was marginally clearer, with more detail in areas of shadow.


The print quality from this machine, while possibly not up to that of a genuine laser printer, is easily good enough for most home and small-business uses and for day-to-day prints, the differences would be largely academic. 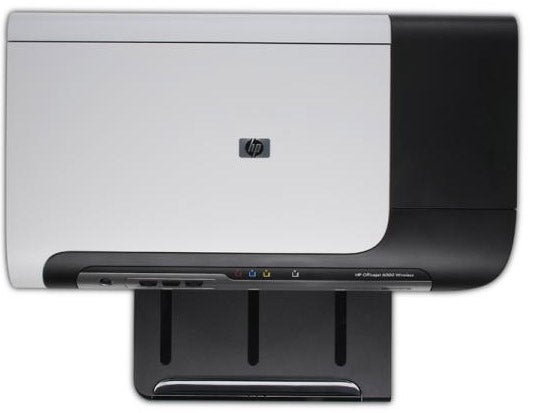 Using the same set of HP 920 cartridges as the 6500, the running costs are, unsurprisingly, the same. The OfficeJet 6000 prints an ISO black page for 2.2p and a colour one for 5.41p, both including 0.7p for plain paper. These costs are very reasonable and compare well with both other inkjet printers and, perhaps more interestingly, with similarly-priced colour lasers.


Take the Canon i-SENSYS LBP5050 or the Konica Minolta Magicolor 1600W, both at around £150. The Canon costs 2.66p and 11.52p for the same pages and the Konica Minolta costs come out at 3.71p and 13.43p. The OfficeJet 6000 isn’t that much cheaper on black print, but on the colour pages it’s between 54 percent and 60 percent cheaper. That’s around 6p you’re saving on every colour page printed


The OfficeJet 6000 is a good office inkjet printer. However, with the OfficeJet 6500 Wireless at £170 and the £130 non-wireless OfficeJet 6500 still offering a scanner with ADF, duplex print, fax, photo card printing and wireless, you have to be certain you don’t need any of these extra features to go for this printer, instead. Any one feature is probably worth the £40 price difference.