In between the personal desktop laser printer and the freestanding workgroup machine sits a category which could best be described as SOHO (small office, home office) lasers. These are faster than the entry-level machines, often around the 20ppm mark, and usually have duplex print built-in as standard. HP’s new LaserJet Pro P1606dn sits in this category, with a performance suitable to stake a claim in the small business market, too. 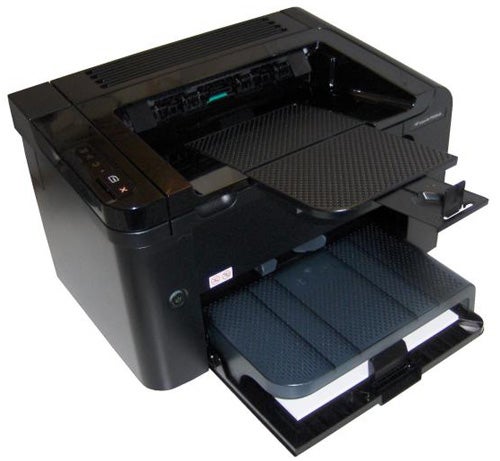 All decked out in black plastic, but with an industrial look, using large sections of walkway-style patterning, the printer doesn’t quite know whether it’s a permanent printing fixture or not. There’s no separate paper cassette, instead it takes up to 250 sheets stacked on the inside of its front cover, as do entry-level machines like the HP LaserJet Pro P1102w reviewed last week.


Here, though, there’s a clip-on cover, so you can leave the printer open without getting the paper dusty. The extension to the output tray at the top of the machine is also intended as a permanent fixture and doesn’t fold in when you’re not using the machine. Up to 10 sheets of special-purpose paper can also be loaded, using the paper tray cover as a feed surface.


The control panel consists of four LEDs, for power, data, error conditions and low toner. There are two push-buttons to feed paper and cancel a print job. At the back are sockets for USB and Ethernet, though this machine has no wireless capability as standard. You can add a wireless server, but then you can do that to most printers. 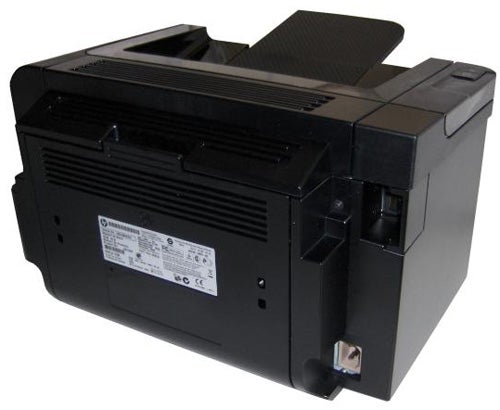 Lift the top cover and you have access to the single-piece drum and toner cartridge, which slots in easily but slides quite a long way into the machine, making it a little fiddly to remove and replace.


Drivers for Windows and OS X are provided on the CD and Linux and UNIX drivers are available through download. There’s also an applet to remind you where to get consumables and HP’s web printing application, which is useful to get web page prints neatly formatted onto paper.

HP claims speeds of up to 25ppm for the LaserJet Pro P1606dn, but our five-page text print produced a speed of 13.6ppm. The 20 page text print, however, increases this to 21.4ppm, while the 5-page text and graphics print split the difference at 17.7ppm. A 15 x 10cm photo on an A4 sheet took seven seconds to print.


These speeds are very respectable and are partly due to the very short wake-up time before printing starts. HP claims its ‘instant-on’ fuser enables first pages to come out in seven seconds and we wouldn’t argue with this.


Duplex print is also rapid, with the same 20-side document printing on 10 pages in 1:24, a speed of 14.3 sides per minute. This is quick enough to set the machine to duplex by default and make consequent paper savings. 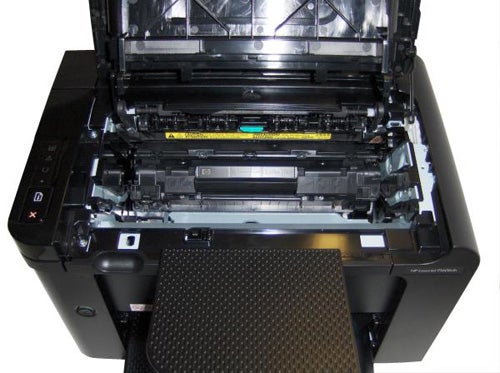 Print quality is generally very good. Black text is sharp and dense with no sign of toner spatter. When it came to line graphics, though, we did notice some irregularities along trailing edges of horizontal lines. These were inconsistent, not appearing on every page, and may have been a teething problem.


Greyscale fills are very good, with a good range of greys and no signs of banding. Black text over grey came out well, too and our test photographic print looked very good, with plenty of shadow detail, as well as finely reproduced objects in the foreground. The printer’s enhanced 1,200dpi resolution is the default for this kind of print, but doesn’t slow the printer down at all, as far as we could measure.


Noise levels are quite high when printing and feeding paper and we recorded a consistent sound level of over 60dBA at 0.5m. This is a lot louder than a typical inkjet printer and up to 10dBA louder than from key rivals. With all laser printers in the same bracket producing similar print quality and speeds these days, sound levels are now becoming a more important differentiator.


There is just one consumable for this machine, a 2,100-page drum and toner cartridge, which we couldn’t find for less than £53 at Internet prices. This leads to a cost per page of 3.38p, including 0.7p for paper. This is unusually high for this class of machine and is perhaps something HP should look at, as some of its major competitors are undercutting it by quite a margin.


However the big difference comes in cost per page, where, including paper costs in all three calculations, the Samsung costs 2.2p, the Brother 2.4p, but the HP 3.4p, a penny more per page than its rivals. Over 10,000 printed pages – a reasonable duty cycle over its life – that’s £100 extra.