What is the HP LaserJet Pro M201dw?

Laser printers are still one of the stalwarts of small and home offices, particularly when colour print isn’t required. HP’s LaserJet Pro M201dw comes in at comparatively low cost, while still offering a good feature set and a well-balanced specification.

The printer’s completely black case has an angular look. Its top surface is slightly tilted forwards and its control panel is mounted on the front, like a small handheld device – though it’s fixed in position and angle. 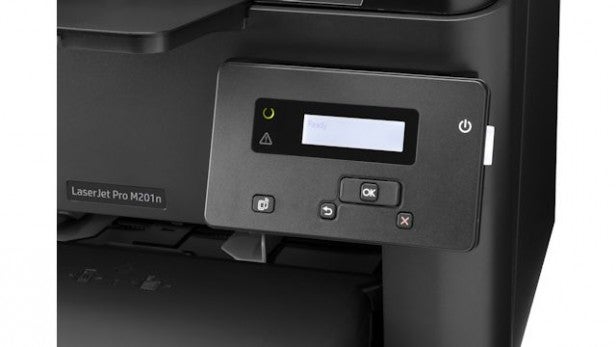 The inset in its top panel, which forms the output tray, is extended with a clip-on balcony and a pull-out extension, which overhangs the 250-sheet feed tray and makes it rather too easy to knock. The feed tray has a hinged cover and you can load individual sheets of special media or envelopes along the top of the cover.

The top cover lifts up to give access to the combined drum and toner cartridge, which slots down inside in a couple of seconds. Cartridges are available in two capacities, of 1500 and 2200 pages. A 1500-page cartridge is supplied with the machine, rather than a low-yield “starter” cartridge. 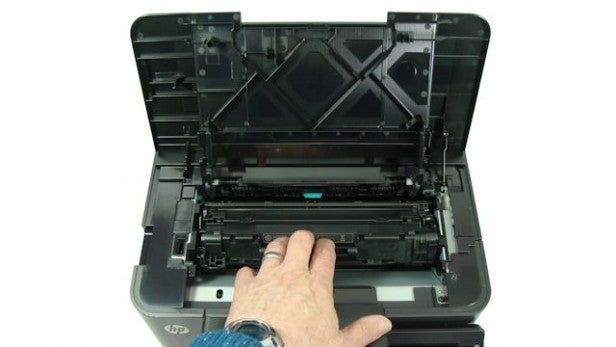 The printer offers three ways of connecting: USB, 10/100 Ethernet and, the most versatile, Wi-Fi link. With a wireless connection, you can print through AirPrint, from HP’s own Android App, or remotely, via ePrint.

The printer driver is pretty standard fare, with presets for many common tasks, such as printing labels, booklets or transparencies. There are several ways of increasing the economy of your print, though oddly, clicking on EcoSMART settings doesn’t switch on Economode print, to save toner.

HP claims a generous print
speed of 25ppm for the LaserJet Pro M201dw but, as with most ISO speed
measurements, this doesn’t include the time it takes to process a print
job prior to printing. The fastest time we recorded from the machine was
17.9ppm for the 20-page text document.

This is in part due to
the printer taking up to 18s to prepare for printing, around twice as
long as, for example, the Canon iSENSYS LBP6230dw. That printer, though
£20 cheaper, has a measured top speed on the same document of 20.3ppm. 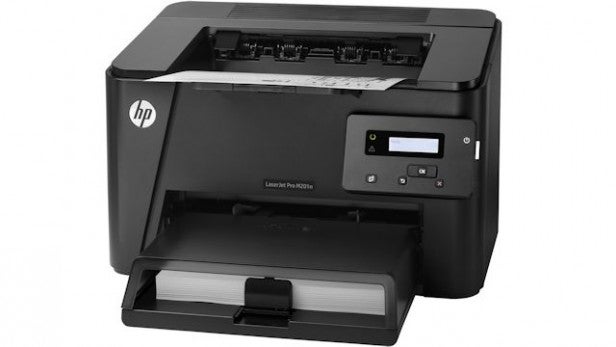 Running
our 5-page text test on the HP machine reduces the measured speed to
10.7ppm, less than half the claimed speed. This is true of Economode,
too, a setting which reduces toner use, while maintaining print quality
to near-normal levels. You should be able to set Economode as default
for nearly all printing.

Printing the 5-page text and graphics
test gives a slightly increased speed of 11.5ppm, since only one page
image has to be rendered. Printing the 20-page document in duplex mode
gave 12.2 sides per minute. A 15 x 10cm photo image from a PC took 19s,
though a similar image from a Samsung Galaxy smart phone took 49s.

Although none of these speeds are close to the rated 25ppm, in normal office use the machine is adequately fast.

Print
quality from the HP LaserJet Pro M201dw is very good. The default
resolution of 600dpi is enough to ensure smooth edges to curves and
diagonals and text is sharp and well-defined.

Graphics are also
good, though greyscale fills are a little patchy. There’s enough
differentiation between different grey shades, though and photographs
are well detailed even in the difficult, darker areas.

Using the
more economical, high-capacity cartridge gives a page cost of 3.5p,
including 0.7p for paper. This is high, even for this class of printer,
where we would expect figures closer to 3p. It does depend, of course,
on how cheaply you can find the cartridges. 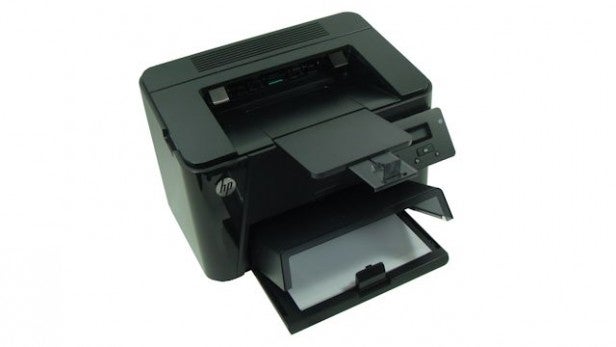 Should I buy an HP LaserJet Pro M201dw?

As
you may have guessed, there’s quite a bit of competition for mono laser
printers in this price range. We’ve already mentioned the Canon iSENSYS
LBP6230dw, which is cheaper to buy and run, slightly faster when
printing and gives similar print quality, though it is a smaller
machine, intended for individual use.

You could also consider the
£155
Dell B2360d which, although it offers no wireless connection, received a
recommendation when we reviewed it, for its high-speed and 1200dpi
resolution.

The HP LaserJet Pro M201dw is a
perfectly adequate home-office mono laser printer, with good print quality,
duplex print and the versatility of a wireless connection. It’s not
particularly cheap to run, though, and the print speed is nowhere near
what HP claims, if you look at the complete print cycle. Economode print
will save you toner and most people will never notice the difference.

Next
Print Speed and Costs Review