The mono office laser printer is still one of HP’s core products and the LaserJet P3005x is a fast and versatile member of its latest generation. It comes as standard with duplex capability and two paper trays, each of which can take a full, 500-sheet ream of paper. This means you can set it up with letterheads and follow-on sheets, and still have a multi-purpose tray for special media, such as envelopes.


Coloured in cream and slate grey, the LaserJet P3005x is pretty cuboid in shape, with only slight curving on the corners. It has a two-line by 16-character, backlit LCD display set into its top surface and a small, seven-button control panel in front of this. Buttons are intelligently colour-coded and include a dedicated blue Help button, which offers on-display advice. There are three LED indicators for Ready, data transmission and Attention, should there be a paper jam.


The power switch is usefully positioned at the front and a 100-sheet multi-purpose print tray folds down above the two 500-sheet main trays, which also slide out from the front. At the back are sockets for USB and Ethernet, but there’s no parallel port, which other manufacturers still supply for legacy support. 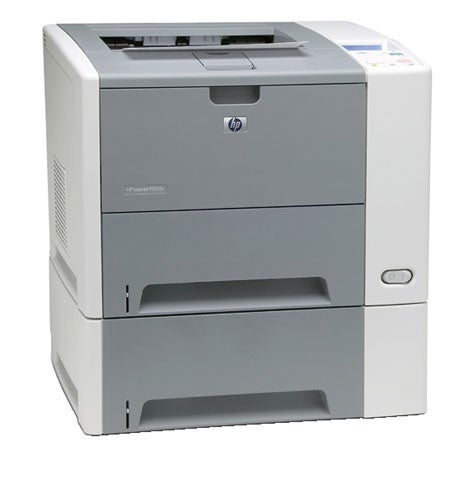 Despite its comparatively high price, the LaserJet P3005x is not that expandable. You can add more memory and other types of network interface than the Ethernet adapter provided, but there’s no collator, envelope feeder or paper sorter. This is a workgroup printer with no pretensions to becoming a departmental machine, should you expand.


Pull open the front panel and you have access to the integrated photoconductor drum and toner cartridge which, like most HP lasers, is a single consumable. Pull the ripcord on one of these cartridges and slot it into place in the printer – that’s all the maintenance this machine needs.


Driver installation is simple enough and HP provides both PCL and PostScript Level 3 support in emulation. The driver is comprehensive and includes support for watermarks, multiple pages per sheet, duplex printing and the collation of booklets.


This is yet another mono laser printer claiming to be able to print at over 30ppm. All the major printer makers are on a hide into nothing, here, as to remain competitive they have to boast numbers within a whisker of their competitors. In fact, our five-page text print took 19 seconds to complete, giving a real world print speed of 15.8ppm.

This is less than half what’s claimed and if you go to the text and graphics test, which prints five identical pages and so reduces the processing time – it still only cuts a second off the completion of the job and ups the print speed to 16.7ppm.


More interesting is a comparison with another laser printer, the Kyocera Mita FS-4000DN, reviewed a couple of weeks ago. That claims a top speed of 45ppm, and yet produced our test prints in almost identical times to this HP machine. Where the HP didn’t do as well was in its duplex speed, where it completed our 20-side test piece in 1:23, over 30 seconds slower than the Kyocera Mita. The HP machine is around £150 cheaper, though. 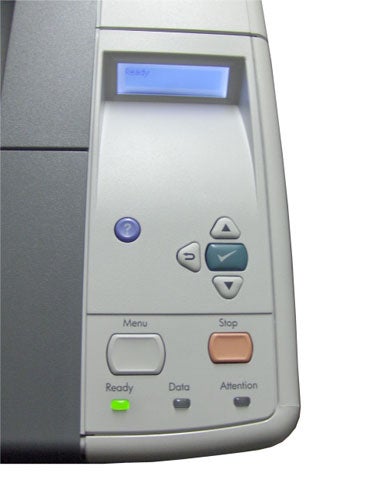 The LaserJet P3005x has three different graphics modes, known as FastRes 1200, ProRes 1200 (141lpi) and ProRes 120 (170lpi). In theory, print quality should get better and better as you go from FastRes to ProRes and increase the lines per inch. In practice, results showed not a lot of difference with, if anything, the FastRes 1200 print being the favourite. This print certainly had the least suggestion of any banding across the image – though all three prints were good.


Subjectively, the HP machine is not noisy, so it was quite a surprise when we measured its sound output with peaks of up to 60dBA. This is again during paper feeding, the Achilles heel of all printers, in sound terms.


The simple consumable regime keeps running costs low and there are two capacities of cartridge, one offering 6,500 sheets and the other 13,000 sheets, both at 5 per cent usage. With the high-yield cartridge typically costing around £120, you end up with a page cost of 1.54p. This is a good figure for a machine in this price bracket, though it doesn’t compare well with the Kyocera’s costs, coming in at under a penny per page.


HP’s LaserJet P3005x is a no-nonsense, workgroup printer with a high duty-cycle of up to 100,000 pages per month. It gets on with the job quickly and efficiently, but for this you have to pay over £600, up front. Print quality is good, even for graphic images which tax most mono lasers. The quoted speed of 33ppm is fanciful, but even at 15ppm, you won’t have to wait long from most print jobs.