HP’s LaserJet P1566 has dimensions not much bigger than the largest page it can print – an A4 sheet. However, they’re the other way round, with a width of 387mm and a depth of only 243mm, so the paper still sticks out the front by a good third of its length. This means it needs a paper tray at the front, provided by the fold-down cover of the machine, and a clip-on ‘balcony’ at the top to support printed documents. 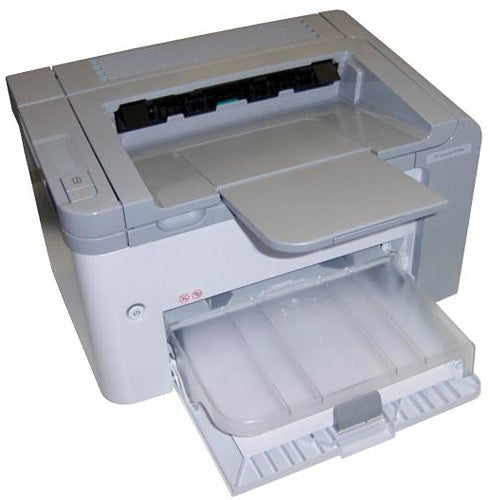 This isn’t the most elegant design, but at least the feed tray does have a lid, so you don’t have to put the paper away and close up the printer whenever you’re not printing. HP has also tried to reduce the apparent bulk of the machine by colouring it in two shades of light grey, which makes a change from the textured black finish used on so many of its printers.


Also unusual is that the control panel, such as it is, is positioned to the left of the output slot on the printer’s top panel, rather than the right. There are just four LEDs to indicate low toner, paper jams and the like, and two buttons, for paper feed and to cancel a printing job. A single front-panel button turns the printer on and off. 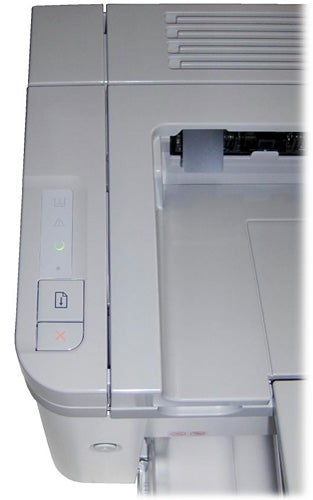 There’s nothing very sophisticated about connections on this machine, as the only socket available is USB. If you need it to network, you’ll have to buy a wireless print server, though HP’s offering costs more than twice as much as the printer itself.


Physical setup is straightforward, though you do have to remove packaging and the combined drum and toner cartridge, pull off a sealing tape and reinsert the cartridge before you can start to print.


Software installation is extremely simple, if you’re running under Windows, as the printer has its own driver in ROM and will happily download it and install it through the USB connection when you first connect the printer to a PC. You can still use the supplied CD driver, if you prefer, and you have to take this route if you’re connecting the machine to a Mac.


There’s not much software other than the driver itself, though you can download a web print applet from the HP site. Support is provided for Windows, OS X and Linux, though the Linux driver is again a download.

The LaserJet P1566 has what HP calls Instant-on Technology, which means it doesn’t have to wait to warm its fuser up before starting a print job, when it’s been asleep. In fact, it’s one of the fastest printers we’ve seen to start a print job from being fully asleep. It’s not much more than five seconds before the paper starts to move. 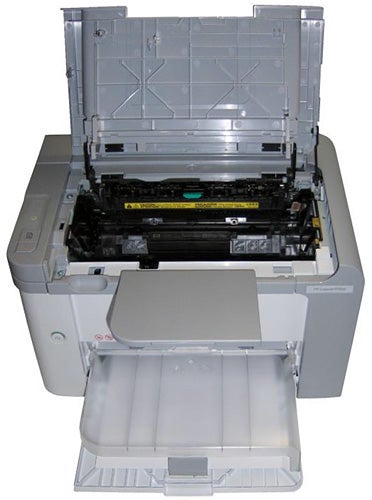 With this quick start, which will particularly benefit anybody who uses a printer occasionally for short jobs, you’re likely to see something close to the claimed 22ppm print speed. Although our 5-page document took 23 seconds – a speed of 13ppm – the longer, 20-page job gave a speed of 19.1ppm, not a long way off the headline figure. The 5-page text and graphics document came through in 15ppm, another good result, and a 15 x 10cm photo print completed in a very impressive seven seconds.


Mono laser print has long been one of HP’s strengths and the text output from this printer is hard to fault. Characters are well formed with no signs of jagged edges to curves or diagonals and clean, bold print not marked by any toner spatter. 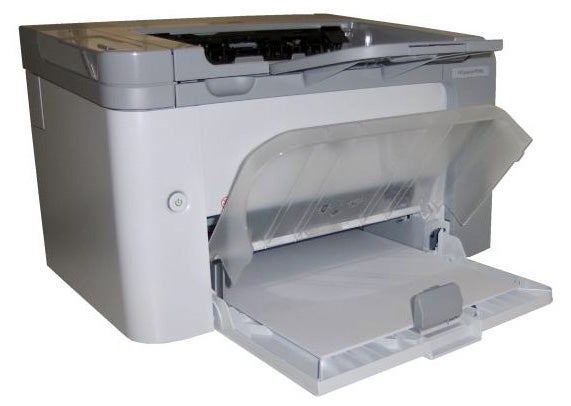 Although the default resolution is 600dpi, HP enhances this up to a 1,200dpi-like print, which stands the machine in good stead for printing graphics. Greyscale fills aren’t quite as smooth as we would like, but there are enough grey shades to do a colour original justice. The only problem we saw with a graphical output was spiked edges to some of the graphic borders.


Our test photo print gave surprisingly good detail in the difficult darker areas of our test image, but there was still some unevenness to areas of smooth texture, in this case the sky in the photo.


There’s just one version of the combined drum and toner cartridge, with a capacity of 2,100 pages, and the cheapest we could find this for was just over £55. This gives a cost per page of 3.5p, including 0.7p for paper, which is competitive with other HP lasers and pretty much in the middle of the field, when compared with rival machines in the same price range.


HP has sorted the principles of mono laser print and can produce consistently good quality print at good speed, even from a printer costing well under £150. Here, it has concentrated on easy installation and quick start-up, which improves overall performance on any printer that isn’t in constant use. The LaserJet P1566 would be a good choice for any small or home office with a reasonable workload of general business documents.