One of the recent technologies to infiltrate the printer market is wireless. Where a Wi-Fi connection used to be included only on a limited number of models in a range and then in the more expensive, premium products, it’s now becoming increasingly ubiquitous. HP’s brand-new, £100 LaserJet P1102w has wireless, complete with a button to turn it on and off.


This printer has very modest dimensions, mainly because it’s input and output trays fold out only when needed. The 150-sheet input tray folds down from the front panel and the paper stop slides out to the front. Cleverly positioned above the main input tray is a 10-sheet priority feeder for envelopes or special media, which is unusual in a machine at this end of the market. 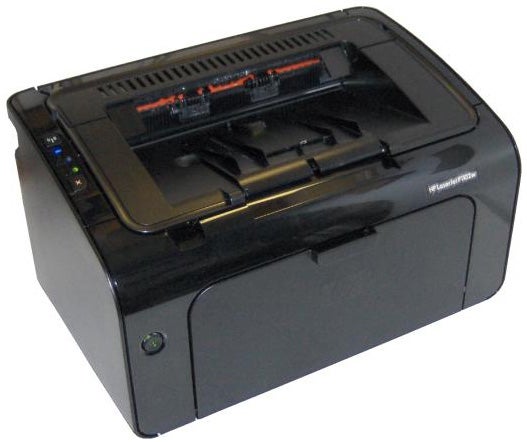 The output tray folds out from the top panel, where it looks a little incongruous and a small paper stop flips up to help keep output documents neat.


The top panel has a textured black inset, while the surround is high-gloss black plastic, with a small control panel down the left-hand side, including indicators for wireless connection, errors and power and two buttons for wireless and job cancel.


The blue wireless indicator goes off when the printer switches to sleep mode, which is illogical, as the printer wouldn’t wake to print if the link wasn’t still active. Most wireless printers leave their connection light on, even when sleeping. 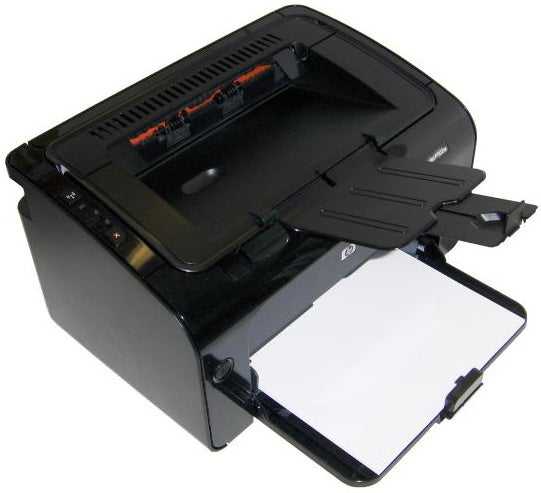 A small cut-out at the back of the left-hand side panel takes a USB cable and a temporary USB connection is necessary even if you intend to use the printer through Wi-Fi.


Lift the top cover and you have access to the small, discreet drum and toner cartridge, which slots down deep into the bowels of the printer. This is an easy-to-fit consumable, rated at 1,600 pages and is the only consumable in the machine.


HP provides 32-bit and 64-bit divers for Windows XP, Vista and 7, and for OS X from version 10.4. There’s also a Linux driver available for download. There’s not much other software.

HP rates the LaserJet Pro P1102w at 18ppm, which is a fair speed for a personal laser printer. Our 5-page text print took 27s, which is equivalent to a speed of 11.1ppm, but increasing the page count to a 20-page document took the speed up to 15.8ppm, which is over 75 per cent of the rated speed.


These speeds are very reasonable for an entry-level machine and compare well with recent Samsung models, such as the ML-2525 and ML-1915.


It’s difficult to write anything original about the print quality of modern, monochrome laser printers, as nearly all manufacturers have got the basics sussed. Text at normal point sizes, from 10 to 12 point, shows no artefact of any consequence, and is dense and black. 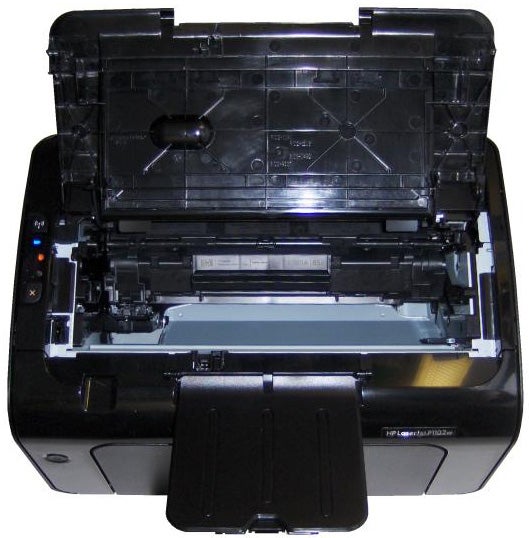 While retired printers (human) might be able to tell the difference between this laser output and letterpress print, for most business users there will be little obvious difference and the quality is more than adequate for internal reports and printed materials aimed at the general public.


Greyscale print is also very reasonable, with generally smooth greyscales available for all kinds of business graphics. Some colours translate to very similar shades of grey, which can be confusing, but for the most part business charts and graphs look smart and clean.


Even photo images, never a mono laser’s favourite task, look realistic and well detailed. While areas of sky appear a little mottled, at least they’re not covered in light and dark bands, as is often the case with inexpensive laser engines. The level of detail in darker areas of photos is also better than average, with less of the image tending to black.


The single-piece drum and toner cartridge comes in just one capacity, though HP manages to more than halve this by offering an introductory cartridge good for just 700 pages.


We reckon it’s legitimate to supply a new machine with the lower of two capacities of consumable, if both are available to buy, but to create a special, low-capacity cartridge simply to ship with new printers strikes us as cynical. Why should new customers not get the standard yield cartridge?


At the cheapest price we could find for the consumable, the page cost comes out at 3.6p per page, including 0.7p for paper. This isn’t particularly good. Comparing again with the two Samsung machines, you’re looking at around 0.8p more per page with the LaserJet. It’s not because the HP cartridge is new to market, either; it’s already used in other HP personal lasers.


Overall, this is a worthwhile, entry-level mono laser printer, which comes as standard with wireless connection and prints good-quality pages quickly. It’s comparatively expensive to run though, and costs around 25 percent more to buy than some of its main rivals. Unless you’re a devoted HP customer, there are other machines that are strong contenders here.