Personal mono laser printers form a much smaller market than equivalently-priced ink-jets, but there are still plenty of people who need high quality, quick, black print, with the permanence that laser toner can provide. HP’s new LaserJet P1006 is, according to the company, the smallest laser printer it has ever made and it certainly has compact lines.


This printer is obviously designed for occasional use, as you can only see its impressively discreet dimensions when the input and output trays folded closed. The input tray folds up on the front of the printer and the output tray folds over its top. With both in their open positions, the printer is quite a bit bigger than when closed and there’s no cover to protect the 150 sheets of paper in the input tray, which can pick up dust and other debris. 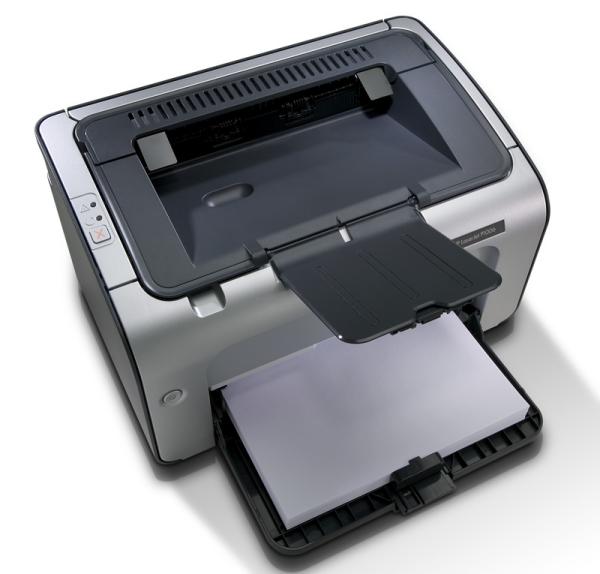 Above the feed tray is a special-purpose feed, which can take up to 10 sheets at a time. On the printer’s top surface is a very simple control panel, with power and data lights and a single button to cancel printing jobs. At the back there’s a standard kettle lead mains socket and a USB 2.0 port, though we’d like to see the USB socket positioned lower, to make the cable less conspicuous.


HP has taken the brave step of putting the Getting Started Guide on the driver CD, but has also taken the opportunity to create an animated installation video, which shows everything from removal of packing tapes, through installing the cartridge, to loading paper. It automatically pauses at each stage for you to follow through the instructions and it’s hard to see how anybody could fail to get the printer installed successfully, provided they follow them closely.


The printer is supplied with its toner cartridge in place, but you have to remove this to pull out the seal-tape and remove the spacer. Other than this, all you need do is install the software and connect the USB cable when instructed. There’s no extra software, but the driver covers all the usual bases, including multiple pages per sheet, watermarks and manual duplexing.


HP quotes up to 16ppm for A4 pages from the LaserJet P1006 and we completed our five page text document in 27 seconds. The text and graphics page, again printed five-off, clocked in three seconds faster than this at 24 seconds. This equates to a print speed of 12.5ppm, which is not a lot short of the claimed speed and is a refreshing change from printers which often show less than 50 per cent of their rated figures.

Our final test piece, a 15 x 10cm photo, finished in an impressive 10 seconds at standard 600dpi resolution and 12 seconds when we used the enhanced FastRes 1200 output. Six photos per minute is a good speed for a personal printer like this.


Photos themselves are very detailed, at either resolution, though the higher one, even if only an enhanced 600dpi, does give a smoother result. Graduated tints are clean and there’s no sign of any banding, which is unusual in any laser. Tints are a little light and may need to be adjusted down for natural results. 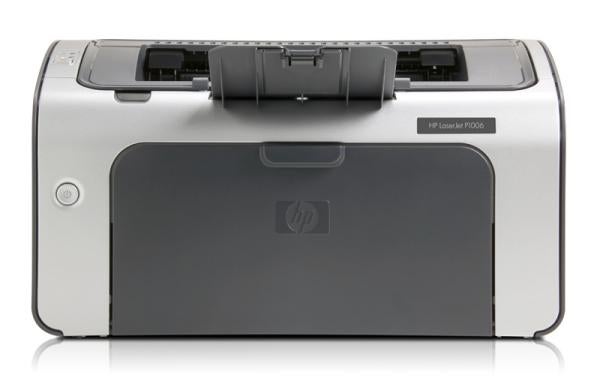 Business graphics are also well reproduced, with a good range of greyscales representing the different colours. Text is sharp and well-formed – good enough for external documents, as well as those used within your home or office. Overall, print quality is as good as from any laser printer in this price bracket, and is better than many, while the combined photoconductor and toner cartridge means you get a new print engine every time you change it.


If you’re in the market for a personal laser printer, the HP LaserJet P1006 is a good, simple machine that’s easy to set up and use, doesn’t cost too much to run and produces very good prints. It has a couple of inconveniences, such as having to open the printer and load it with paper before printing – unless you fancy leaving the paper to gather dust between sessions – but for all that, the main thing people look for in a mono printer is print quality and HP has hit it right on the nail with this machine. Easy maintenance and a quick print response for its class, with minimal warm up, complete the picture and add up to a very good personal printing device.