Most of HP’s MultiFunction Printers (MFPs) to date have been colour ink-jet machines or heavyweight workgroup colour lasers. The LaserJet M1522n MFP is a neat, desktop, mono laser device, intended for the small or home office. As well as offering full-colour scanning, it boasts HP’s instant-on printing, which means there’s no warming up time before printing starts.


In many ways this is a conventionally designed multifunction machine with an A4 flatbed scanner defining its width. There’s a 50-sheet Automatic Document Feeder (ADF) on top, with a rather flimsy feed tray. Lift the ADF to reveal a full A4 flatbed and in front of this there’s a simple control panel. 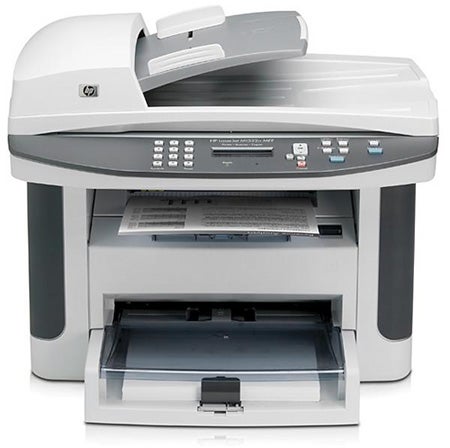 As well as a keypad on the left for entering the number of copies, there are buttons to the right of the two-line by 16-character LCD display that offer simple adjustment of lightness and darkness, number of copies and print quality. You can also enlarge and reduce copies from the flatbed.


The laser printer section of the machine has a protruding paper tray that can take up to 250 sheets and includes a rather awkward multipurpose feed on its top cover. The adjustment guides are quite tricky to get at as they’re positioned inside the machine. Pages feed to a simple plastic tray just below the machine’s control panel. 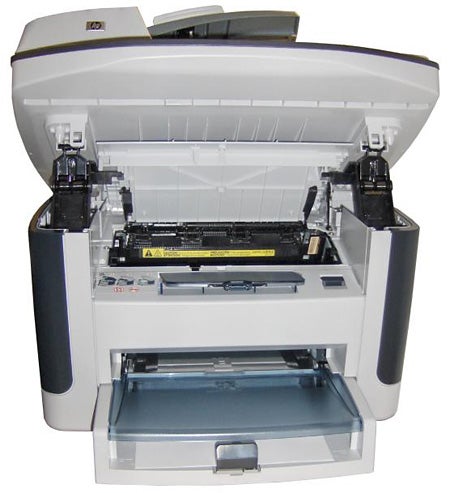 At the back are sockets for USB 2.0 and Ethernet; this machine can service a network as well as being connected locally to an individual PC. After lifting the scanner section up, the single piece drum and toner cartridge slots down from the top towards the back of the machine. Access is easy as there’s quite a bit of free space inside the case.


The supplied HP software covers printing, scanning and copying and there’s a separate copy of Readiris OCR in both Windows and Mac versions. The setup utility offers a complete installation or express versions for just USB or just network functionality.


Instant-on printing makes a dramatic difference to the print and copy speed. On many laser-based printers we test, the paper doesn’t start to move for 15 to 20 seconds while the fuser unit, which bonds the toner to the paper, heats up to its working temperature. On this LaserJet, however, printing starts almost as soon as the ‘Printing’ message appears on its control panel display and the first page is complete inside 15 seconds.

Mainly due to the rapid start-up, the print speeds we saw were very impressive for a machine costing little over £200. Our five-page text print completed in 22 seconds and the five-page text and graphics test took one second less, giving print speeds of 13.6ppm and 14.29ppm, respectively. In some ways, even more impressive were the 15 x 10cm photo print, which completed in 11 seconds, and the photocopies, from glass and ADF, which took 10 seconds and 14 seconds. These are some of the best copy times we’ve seen.


The quality of the prints was generally excellent with fine, detailed black text and dense black tones to lines and fills. Coloured tints behind black text were also reproduced reasonably well, with no signs of banding.


There is a weak spot in the LaserJet performance, though, and that’s photocopy quality. Photocopy text is fine, but areas of fill, particularly copied from print rather than the continuous tone of a photograph, are very poor. The textures break up and come through much lighter or much darker than the originals. It’s progressively better if you select text, mixed or photo modes, using the quality button on the control panel, but it’s still never that good. 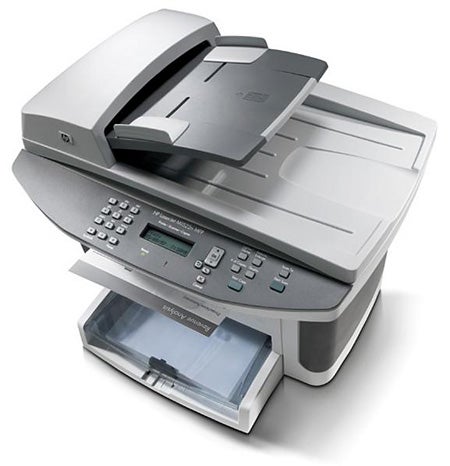 This could be a de-screening issue – where the dot pattern of the original page being scanned conflicts with the dot pattern output by the scanner – and it’s something we’ve seen before in other manufacturers’ scanners. However, it’s the first time it’s been apparent in an HP machine.


It could hardly be easier to work out the running costs of the LaserJet M1522n, as the single-piece drum and toner cartridge costs a little under £50 and is good for 2,000 pages. HP follows an unfortunate trend, though, by supplying a ‘starter’ cartridge, which prints just 1,000 pages.


The page print costs come out at 3.17p, which is quite high, even when compared with other LaserJet printers. The LaserJet P2014, for example, gave a print cost of 2.05p, some 35 per cent cheaper. If you can find the print cartridge at a lower price, of course, the cost per page drops accordingly.


It’s difficult to know how to sum up the LaserJet M1522n MFP. We started by being impressed by the machine’s ease-of-use and spectacular print speeds, but were brought back down to earth by its dodgy copy quality. Most people buying a multifunction printer intend to use it at least in part as a photocopier. As long as you’re photocopying text, this should be fine, but copying graphics is something of a letdown.