Speed is one of the key determining factors in the price of a mono laser printer. Particularly in the network laser market, where the printer is to be shared between 20 or more people, pushing print jobs through quickly is very important. Even so, is HP’s 52 page per minute LaserJet 4350n worth just over £1,100?


In its basic form with or without a network server – the ‘n’ version reviewed here includes an internal JetDirect card – the printer is a substantial machine following conventional lines. A paper feed tray pulls out from the bottom and takes a full 500-sheet ream. The paper then follows an ‘S’ print path, to exit onto the machine’s top surface. 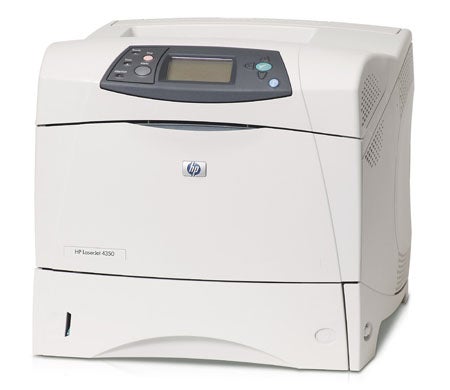 Above the paper tray a multipurpose tray folds down and telescopes out to take a further 100 sheets of specialist media, from letterheads to envelopes or transparencies. At the back are sockets for USB 2.0, parallel and 10/100 Ethernet connections, providing plenty of scope for local and networked use. The mains socket is also at the back, though sensibly, the power switch is at the front of the right side panel.


If you have at least one eye on expanding your laser printer, you can go a long way with the LaserJet 4350n. As well as the fairly standard options of an extra paper tray and a duplexer – for printing on both sides of the paper – here you can add two extra 500-sheet paper trays, a 1500-sheet paper bin, a finished print stacker and a stacker/stapler. There’s a 75-envelope feeder and even a stand with casters to build the expanded printer tower onto.


A four-line by 16-character backlit LCD display provides plenty of room for the various menus, which are well-organised and easy to navigate. However, for all the extra scope offered by the multi-line display, some inconsistency in button labelling sometimes makes this device less than intuitive to use. 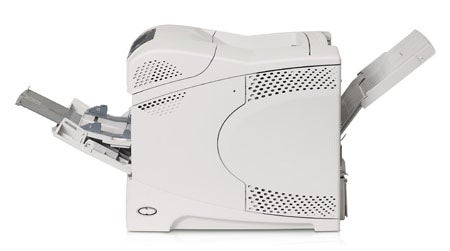 For example, a popular message on the display is ‘To return to Ready press STOP’, yet there’s no button on the panel labelled Stop. The button that’s needed is labelled Cancel Job. Similarly, the button the manual refers to as Menu is labelled Pause/Resume on the printer. HP is usually attentive to these details, but not this time.


Software installation is very simple, with the driver being installed in one operation. It offers common facilities like watermarks and page imposition – up to 16 pages per sheet – and three resolution settings. Although the maximum physical resolution of the LaserJet 4350n is 1,200dpi, FastRes 1200 interpolation produces the equivalent of 1,200dpi without sacrificing speed. It’s the default resolution, though you can set 600dpi explicitly.

ProRes 1200 is a true 1,200dpi mode. It takes twice as much memory and so slows printing – though in our tests, not by much – and provides very high quality print for graphics.


Connection via the internal network adapter is also straightforward and shouldn’t cause problems to anybody with a bit of network savvy and a DHCP server in a router or switch. A simple browser connection to the printer offers configuration options and this can be password protected to restrict changes to those with administrator privileges.


With a rated print speed of 52ppm, we decided to add a 20 page test piece to our test regime, as well as the standard five page text document. This larger print job completed in just 34 seconds, giving a measured page rate of around 35ppm. 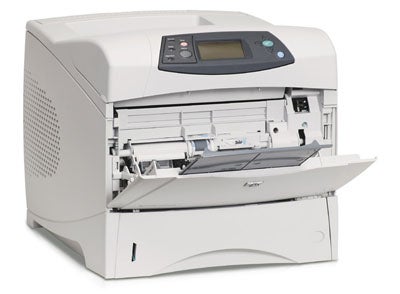 HP uses an ‘instant on’ fuser and claims a “first page out” in eight seconds, which is what we measured. The text and business graphics test page printed in just eight seconds and the 5 x 3in photo print, using the printer’s ProRes 1200dpi output took only a second longer.


Despite the printer’s impressive speed, you don’t sacrifice text print quality. Text print is very clean with no noticeable spatter and a good spread of weight from bold text to fine lines. Areas of greyscale tone in the business graphics print were a little blotchy, though, with some micro-banding, but nothing to get too worried about.


Fine detail in the FastRes 1200 photographic print wasn’t well reproduced and areas of varied tinting across the sky were noticeably noisy. This improved when we repeated the print using ProRes 1200 at its 141lines per inch equivalent, but was marginally worse when we took it up to ProRes 1200 at its top 180lpi setting.


This is a very cheap printer to run, with its integral toner and drum cartridge the only consumable. There are two capacities available, 10,000 and 20,000 pages at five per cent cover. As usual, we used the higher yield cartridge to determine page costs and produced a figure of 1.14p, way down on most of the competition.


Even with its fast print speed and multiple expansion paths, the HP LaserJet 4350n looks pricey at over £1,100. For comparison, the 45ppm networked Lexmark T634n, with very similar expansion options, costs over £200 less.