A personal laser printer is a very convenient printing tool for anybody who wants high-quality, mono-only text and simple graphics. Prices are continuing to fall and HP’s latest contender is the LaserJet 1018, coming in at under £80.


This is a simple, bread-bin shaped printer, with a sloping top surface and folding paper trays. The idea is that when it’s not printing, you fold up the paper feed and output trays, leaving a machine with a footprint on the desk not much larger than a manila folder. There’s no fixed input tray, but instead, when you fold down the front cover, you find guides for a paper stack of up to 150 sheets. Unusually for this design of machine, there’s also a single-sheet, priority feed for an envelope or special media.


There’s a bare minimum of indicators on the top surface of the LaserJet 1018, with just two green LEDs, indicating power and attention (paper jams etc). All controls are via the software driver. At the back is a socket for a USB 2.0 cable, the only means of connecting the printer to the outside world. 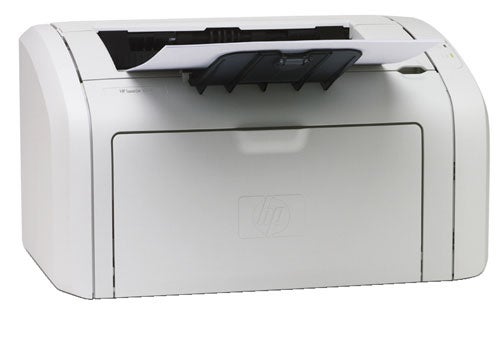 Fitting the single-piece drum and toner cartridge could hardly be simpler. You lift the top cover and slide the cartridge in, until it rotates slightly to lock into position. That’s all there is to it and you are then free to print 2,000 pages before it needs replacing.


The LaserJet 1018 is a pretty simple printer and it doesn’t need much in the way of software control. Install the supplied CD and you get a typical HP driver, providing watermarks, – though no overprinting – support for printing up to 16 pages per sheet and the ability to fit a printed document to the size of paper available, great for printing Web pages.


There’s guidance to help you print manually on both sides of the paper, though no automatic duplexing. You can also choose the printer’s default resolution of 600dpi or an enhanced print with a virtual resolution of 1,200dpi. Even when printing greyscale images, we could see very little difference between the two.


One of the LaserJet 1018’s key competitors is Lexmark’s E120n and the ‘n’ in that model names stands for network. The Lexmark machine has an Ethernet port as standard, while its HP rival doesn’t and has no option for one, either. While this won’t matter to the personal buyer, using the 1018 in the home or small office, for those considering one-per-desk provision in a larger office, it could make all the difference.

Text print quality is very good, with sharp, well-defined characters producing high-contrast pages for general office correspondence. When you print business graphics, though, with greyscale tints behind text, the results aren’t as clear. While they’re still acceptable, the dot patterns making up areas of tone make them look uneven. Small text laid on top of greyscale tints can lose definition.


Greyscale output suffers from the same problem, where the stippling makes the output look a little grubby. Against this, definition and detail is good in what is not, normally, a primary task for a laser printer. Good enough for house particulars – though these days most are in colour – but possibly not for an exhibition catalogue.


HP rates the printer at 12ppm and with results of 34 and 31 seconds for the text and text and graphics prints, it gets a lot closer than most to its manufacturer’s claims. Even so, there are faster personal lasers at similar prices. It produces a 15 x 10cm photo print in a very respectable 10 seconds. 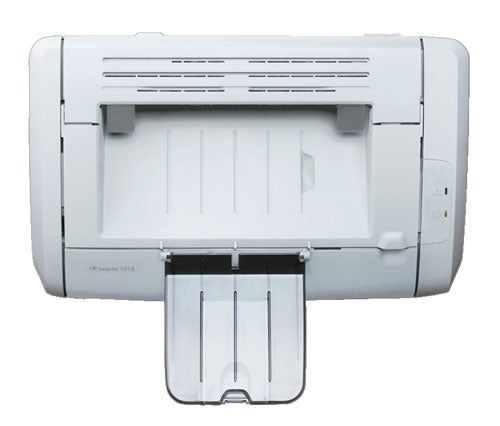 The LaserJet 1018 is a pleasantly quiet printer, belying the measured figure of 58dBA. It has a very smooth printing action and you could happily talk on the phone with it printing directly beside you on your desk.


A single piece drum and toner cartridge makes calculation of running costs very straightforward. HP claims a cartridge will produce 2,000, five per cent cover pages on average and we found them available for around £37, giving a cost per page of 2.35p. This is pretty good – around 24 per cent lower than the Lexmark E120n, for example – and certainly good among sub-£100 laser printers.


Looking at multiple printers in an office, the simplicity of maintenance with a single-piece toner and drum unit may mean additional cost savings in comparison with printers using separate toner and photoconductor units.


There are pros and cons to this printer which you’ll need to weigh up before deciding whether to buy. On the con side, there’s no facility for networking the device, even on a small home network, unless you tie it to a local PC and make it available as a shared device. Its print quality is generally good, though its greyscales aren’t as good as the E120’s. Running costs however are noticeably lower and this is something most purchasers will value. 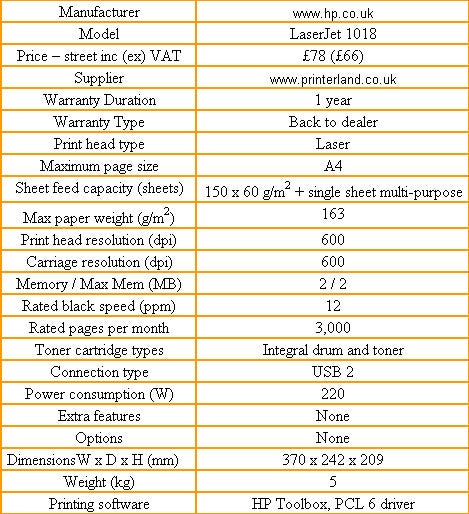 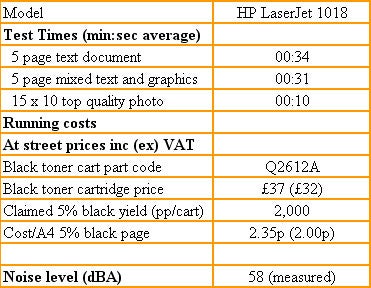