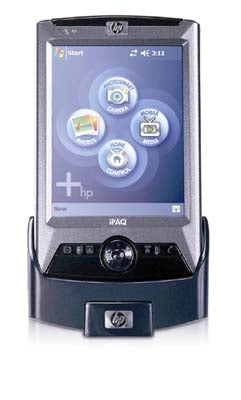 Hewlett Packard has established its handheld computing name firmly in the corporate sector. It proudly holds a pivotal position here: you’ll see executives toting their iPAQs on trains far more often than you’ll see them with rival Pocket PCs, and only RIM’s Blackberry seems to come near the iPAQ for popularity. You might think HP would be happy with that niche, and concentrate on consolidating its position, but it would appear that this isn’t the case.


The company recently announced four new Pocket PCs, two of which are squarely aimed at consumers. The rx1710 is the entry level device, but by far the more compelling of the two is the rx3715, which HP is calling its Mobile Media Companion.


In a world where Pocket PCs can be hard to differentiate (many have silver casings, Microsoft’s Windows Mobile software is always there, WiFi and Bluetooth are becoming ubiquitous), and differentiation is often made on the basis of things like processor speed (which can frankly be negligibly important for many home users), installed RAM (the more the better), or the size of the navigation button (a matter of personal preference), launching a device which is radically different from the rest is quite a bold move.


Differentiation is really the name of the game for HP with this Pocket PC though. The company has gone for a rather sedate slate grey casing leaving brash corporate silver behind. And Microsoft’s dull old Today screen has gone, replaced by a screen that throws you straight into many of the multimedia offerings available. 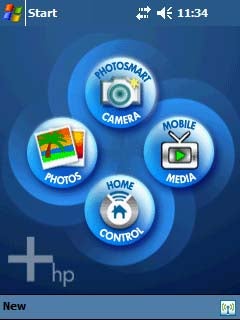 One of these is a built-in Photosmart digital camera capable of shooting stills and video, the former at resolutions up to 1,280 x 960 with resolutions of 160 x 120, 320 x 240, 640 x 480 also available. The latter at 160 x 120, 176 x 144 and 320 x 240. Where the still camera is concerned there are colour filters (black and white, sepia, negative, cool), white balance settings (auto, sun, tungsten, fluorescent), three data compression settings, and a self timer to play with. Image and videos are viewable on the hardware and HP replaces the Windows Mobile Pictures software with its own HP Image Zone which lets you view images, share them, print and draw on them, and works in conjunction with the supplied PC desktop version of the Image Zone software.

A Mobile Media Companion has to provide for more than just video and stills, though, and a second button on the bespoke Today screen is labelled ‘mobile media’. Tapping this takes you to a new screen offering locally stored and streamed material, the latter accessed across the built in 802.11b and requiring that you install the provided Mobile Media for PC software on a Windows XP machine. If you use an older operating system, or run a Mac, you’ll need to find a different streaming solution. While on the subject of wireless, you get Bluetooth functionality too, so you should be able to stay connected pretty much anywhere. 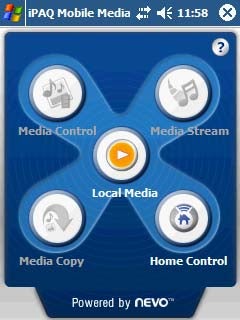 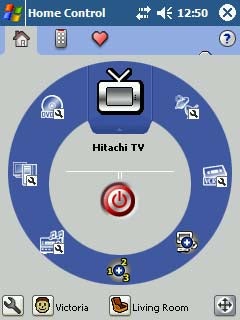 This ‘media access’ screen also provides a route to one of the unexpected successes of the PDA world – infrared remote control. Hewlett Packard has taken its media streaming software from Nevo and has also chosen to put Nevo’s infrared remote control tool onto the ROM of the rx3715, thereby providing couch potatoes with control over TV, VCR, DVD player and whatever other infra red hardware they happen to have.


There are settings for a huge array of devices already built in, and the software can learn from your infrared handsets if what’s provided doesn’t suit. There is plenty of customisation on offer. For example you can set up configurations for different rooms in the house and for different users and have one-tap activities – think of these as macros for the control of several infrared devices at once.


There is a copious amount of help in the printed manual covering set up and use of all this multimedia, installing and using the PC applications, streaming and downloading to the iPAQ rx3715.


To round off the software range HP has included Dockware’s screensaver (which presents date information over an image), the PocketTV MPEG player, and the iTask application switcher that HP uses more often than not. This now includes a button to move to landscape mode (a feature allowed by Windows Mobile for Pocket PC 2003 Second Edition but rather poorly implemented by Microsoft in that it requires you to go to the Settings area to make the change.) There is also a backup utility which, oddly, doesn’t seem to want to send backup data across a wireless network to your PC.


None of the software and features on the iPAQ rx3715 are impossible to configure on other Pocket PCs. But three things make this Pocket PC unique: the integration of all these elements onto ROM, the provision of copious amounts of memory in which to run locally stored media and saved images (152MB of available memory really is a vast amount for a Pocket PC), and the means to access all those multimedia odds and ends from a single non-standard main screen.


As for the more usual Pocket PC side of things, all of the Windows Mobile usual fare is here and accessible, as already noted, from the Start button. Notably absent, as it is not part of Windows Mobile 2003 Second Edition by default, is Microsoft Reader. It isn’t stretching the imagination too far to expect that a multimedia user might want to read the odd ebook, so I’d have liked to see a reader on ROM, though not necessarily Microsoft’s own.

Most of this review has been about software, but then apart from the generous 152MB of memory, the WiFi for media streaming, and the Bluetooth, it’s the software that will sell the iPAQ rx3715. For the record though, there is an SD card slot in the top of the casing which supports SDIO so you can add peripherals as well as more memory, while a button on the left side of the casing where you might more usually find a jog wheel activates the camera. The four buttons which more normally activate key Windows Mobile Applications are, this time around, dedicated to the Mobile Media control area, the HP Image Zone viewer, Nevo’s infrared remote control tool and the iTask application switcher.


You get a docking cradle which is rather nicely styled and coloured slate grey like the hardware, and a dongle which allows you to charge the iPAQ rx3715 without the cradle. There’s a carry case too, which is a nice touch for a device Hewlett Packard clearly expects to be toted frequently by its owners.


For all its megapixels don’t expect the built-in camera to replace a good dedicated digital camera. Dedicated cameras are still far and away better than anything you’ll find in a phone or PDA. The media streaming is nice, and it works, but I stream audio to my old Mio 558 over WiFi so it’s hardly a special feature. Nevo’s TV remote control? I could buy one of a number of applications to provide this feature.


I couldn’t close without a word on battery life. Rather than invent a fancy new fangled media streaming test, I ran the test I always run for Pocket PCs – simple looping of MP3 music until the battery gives out. WiFi and Bluetooth were turned off, the screen set always on and at half brightness, speaker volume as high as possible and beam receive was off. A low battery warning came through after four hours 22 minutes, music continued for 6 hours 25 minutes and when music playback stopped so did the machine. This is a pretty good result and I conclude that HP has put some effort into getting the battery to perform well.


You could be forgiven for thinking that HP is targeting PalmOne’s market directly with the rx3715. But let’s take a step back from that for a moment. You can buy PalmOne’s flagship Zire 72 for £231 inc VAT and delivery from Clove. The same company is selling the rx3715 for £360 including VAT and delivery. So the rx3715 will set you back more than £100 more.


Palm OS based devices have tens of thousands of third party applications including masses of excellent freeware to choose from, while the array of Pocket PC software is still small (though growing), by comparison.


OK, the Zire 72 lacks the huge memory, WiFi (though it does have Bluetooth and infrared), MPEG player and media streaming. But you can add the first two and even have a chance of adding media streaming through the new PalmOne WiFi card – though I have not seen the card yet so can’t give a view on it.


So maybe the rx3715 isn’t so much a PalmOne killer as a shot at opening up the consumer area for wannabe Pocket PC owners. Personally I’m not sure I like the dedicated main screen or the way the main Windows Mobile applications are hidden from view. But it will be interesting to see how well this device does in retail – it is expensive for a consumer focussed media device for all its streaming, built in wireless and standard Windows Mobile functions. But then again, it is a novel, slick and cleverly thought through combination of hardware and software.


HP is definitely serious about targeting the consumer PDA market, and there are a lot of good features on the rx3715 that could make it a winner on the high street. That said, the price is high for a consumer product, which could swing potential buyers towards a Palm OS device.