One of the big differences between the Data Messenger and its smaller sibling is that this one has a slide out keyboard which puts it in direct competition with the likes of the HTC S740 and Sony Ericsson’s much hyped Xperia X1. That’s some serious competition to go up against, so the question is does the Data Messenger have what it takes to challenge those two big hitters? 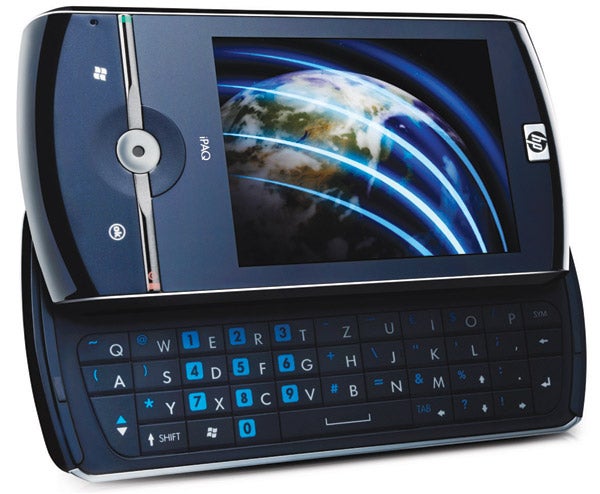 The HP is a much larger and wider than those two main rivals with the result that it looks slightly dated and feels quiet chunky to hold. That said, HP has tried to add a bit of pizzazz to the styling, by opting for a dark navy, glossy finish. The front of the device is obviously dominated by the screen, but beneath this there are two long and thin call/answer and hang up buttons, plus two touch buttons – one acts as the dedicated Windows key and the other as the OK button.


Nestled between these four buttons lies the d-pad, or rather the optical controller that simulates a normal d-pad. Rather than having clickable buttons for up, down, left and right, there’s a small camera in the centre of the pad that responds to the direction in which you glide your finger or thumb over it. It didn’t work particularly well on the Voice Messenger, and the situation wasn’t helped by the fact that it was the phone’s sole controller as that model lacks a touchscreen. For some reason the one on this device is much more responsive and much more accurate. It’s also a tad faster to use than a clickable pad when scrolling through long lists, such as names in your contacts book. Plus, if you don’t like it at least here you can carry out most functions using the touchscreen instead.

The handset’s other key feature, of course, is the slide out keyboard. As the phone is considerably wider than its main rivals, you’d expect the keyboard to be larger too, but in fact it’s not really any bigger than, say, the one found on the X1. We also found that the keys had a slightly ‘stickier’ feel to them and this, combined with the Data Messenger’s short space bar, means that we didn’t like it as much the one on Sony’s model.


The handset’s 2.8in screen isn’t going to win any awards either with its lowly 320 x 240 resolution and 65k colour range. We may have been spoiled by the display on HTC’s Touch HD, but even without taking that into account the one here looks a bit dated, especially as it’s not particularly bright or crisp. However, seeing as the Data Messenger is aimed mainly at business users we can let that slide a bit. The same goes for the camera. Although it has a decent resolution of 3.1-megapixels and an LED flash for low light shooting, the shots it takes lack sharpness and detail and so the results look pretty uninspiring. 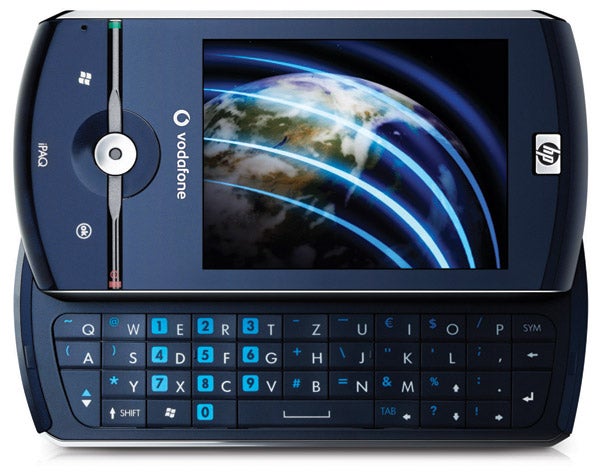 On the plus side the Data Messenger does have onboard GPS. To take advantage of this, HP has preloaded the free Google Maps software and retail units will also come with navigation software under a 30-day free trial, but unfortunately the latter wasn’t included on our review sample so we couldn’t try it out. With Google Maps, however, it was pretty quick to lock on to satellites and pin-point our location.


On the whole, the handset feels relatively speedy in use thanks in large part to the 528MHz Qualcomm 7201A Processor. That said, it does take a while to re-orientate the screen from portrait to landscape mode when you slide out the keyboard, which is a bit annoying. On the storage front there’s 128MB or RAM and 256MB of ROM, plus you can add more space using microSD cards. The card slot is slightly awkwardly placed under the battery cover, although you don’t actually have to remove the battery to get at it so you can still hot swap cards.

Unlike most other manufacturers, HP has made no attempt to hide away any of Windows Mobile’s user interface nasties. Instead you get the standard 6.1 interface in all its convoluted, unintuitive glory. To be fair, though, at least with Windows Mobile you do get the useful Office Mobile suite of applications for creating and editing Word, Excel and PowerPoint documents. On top of this, HP has pre-loaded the Opera browser on the phone, which is far better than Mobile Internet Explorer and works a treat for viewing webpages via either Wi-Fi at home and the office or HSDPA while you’re on the move. 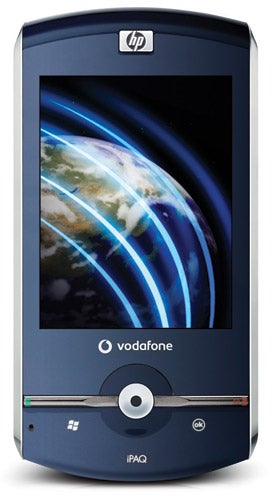 During out test period we found that the call quality was consistently very good and that the phone did a decent job of holding on to calls even in weaker signal areas. Battery life wasn’t bad either as we got about two days of heavy use before it needed topping up with juice.


As we’ve already discussed, the Data Messenger is up against the likes of the Xperia X1 and HTC S740. Priced at around £400 SIM-free it slots in neatly between the two in terms of price as the X1 will empty your wallet to the tune of a hefty £490, while the S740 currently goes for around £320. In truth, it’s not really as sexy or alluring as either of these two, but in general terms it’s closer in functionality to the X1 as it has a touchscreen, something that the S740 lacks.


The Data Messenger is not a gee-whizz handset and, in truth, there’s little to get really excited about either in terms of design or its feature set. However, the phone is aimed mostly at business types so the understated design is understandable and although its line-up of features isn’t earth shattering, it does have all the essentials covered. At the end of the day, we think the Data Messenger is a good handset, rather than a really great one.