Prada phones, phones studded with diamonds and fashion phones are a regular sight in the moody, glass-fronted emporia of the average high street. Yet this kind of glamour rarely casts its golden glow on the world of smartphones.


The iPhone was a rare bright spark, and there has been the odd flicker of light from HTC, E-TEN, Samsung and Blackberry, but other than that, smartphones have largely conformed to the bland business template over the past year or two. HP’s latest handset, alas, does nothing to change this. 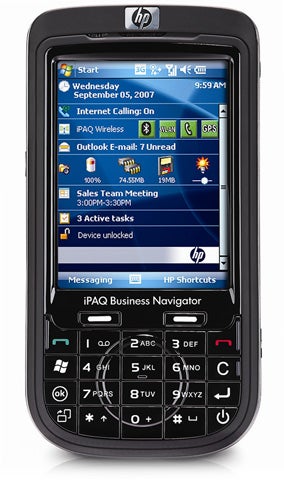 The iPAQ 614c Business Navigator is a large and ugly phone that’s all drab black and grey plastics with no brushed aluminium highlights or chrome trim to set it off. It’s pretty chunky, too, with porky dimensions of 60 x 117 x 18mm. And it’s hardly a design masterpiece in other respects – its integrated numeric keypad has a rather cheap-looking, shiny finish and is topped by a pair of ‘soft’, context-sensitive keys that look like a pair of malevolent eyes leering at you as you write a text or surf the web.


It does at least try to balance out its design shortcomings with a few clever tricks. The first of these is its touch ring (don’t laugh) control. Embossed in glossy relief on top of the numeric pad keys, it enables you to sweep a thumb or finger in a clockwise or anti-clockwise motion to control the navigation through lists and the like. An innovative addition, to be sure.


The phone has support for the latest super fast HSDPA mobile data networks at up to 7.2Mbps. It also has a GPS receiver built in… but this is no ordinary satellite receiver. It uses the new Assisted GPS (A-GPS) technology, which is designed to combine location information gleaned from the phone’s cell location with the data from the satellites themselves to speed up initial satellite lock. The phone is, alas, only supplied with Google Maps – no sat-nav software to speak of – but it did do a decent job of locking onto satellites in central London taking a reasonably quick one minute to lock on to five satellites and provide a position.

Inside, it boasts a very fast processor, using a 520MHz Marvell part to power things along. This is among the most responsive Windows Mobile smartphones I’ve used, with crashes, pauses and hourglass tedium kept to a merciful minimum, even with a handful of applications open simultaneously. And it complements this with a full array of top-end smartphone hardware: Bluetooth 2.0 with EDR and 802.11b/g wireless for data connections in Wi-Fi hotspots. 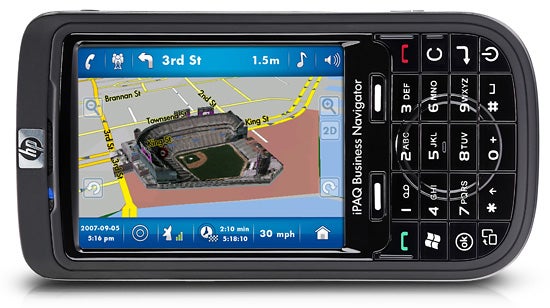 But as soon as I started to use the 614c in anger I discovered that these innovative, and you could say, luxurious touches cannot make up for a design that turns out to have more than just flawed looks. That touch ring control works well, for example, but only in isolation. As soon as you reach the option you’re looking for, you’ll quickly discover that selecting it isn’t as straightforward. The most natural thing would be to hit the button in the centre to select, but that has no effect; instead you have to crab your thumb to the side of the keypad to hit the Enter key. It’s hardly what you’d call great ergonomic design and I found myself, more often than not, operating the device two-handed – with left thumb permanently resting on the OK button on the left edge of the 614c.


Another problem with the touch ring is that because it’s superimposed on the number pad you end up activating it unintentionally when trying to tap out texts and emails. It’s infuriating to find when you look up at the screen after beavering away at the keypad for a moment or two, that the cursor has mysteriously moved from the body of the email to the address field – and that’s where most of your text has ended up. There’s also no way, it seems, of moving the cursor left and right within text other than tapping with a finger nail or the 614c’s telescopic stylus – the touch ring simply moves the cursor up and down.

Elsewhere, it’s less of a disaster, but still not enough to elevate the 614c from smartphone mediocrity. The phone has a pretty decent three megapixel camera on the rear with a light and portrait mirror. It’s quad-band and can be used pretty much anywhere you can get a signal, though that’s nothing special these days. The screen is pretty bog standard – a 2.8in transflective touchscreen effort at 240 x 340 pixels. Battery life is unremarkable too: despite the seemingly high capacity of 1,590mAh I managed to extract just a couple of days of fairly low level use – though this does seem to be the sort of standard that we’re stuck with now – at least until phones with more efficient 3G and HSDPA chips are built. 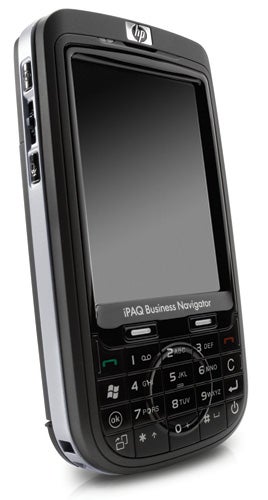 Even HP’s usual thoughtful range of software extras can’t quite make up for its deficiencies. It’s nice to see Remote Desktop preinstalled, a decent PDF viewer is welcome and HP’s Photosmart Mobile application is a nicer application to use than Microsoft’s standard issue Pictures and Video tool. This also has the added bonus of integration with HP’s SnapFish online photo development service.


The 614c is certainly a well-endowed handset. It’s not the first to squeeze so much into a pocket-sized chassis, but there are a few notable features, such as A-GPS, 7.2Mbps HSDPA and a very fast processor. Only the non-VGA screen could possibly be said to be behind the times.


What really puts the mockers on its prospects, however, is the fact that it’s not only a pretty ugly and bulky phone – especially for one without a sliding keyboard – but also one boasting awkward ergonomics. Its innovative touch ring control simply fails to live up to its initial promise and turns out to be more a hindrance than usable addition.