Earlier this year we looked at the HP HDX16-1005ea and went away very impressed. It was the first 16:9 aspect ratio notebook we’d seen from HP, but the company was able to distil all the things we expect in a multimedia notebook into one cohesive, classy and reasonably priced machine. Now we’re looking at the HDX16’s larger sibling, the HDX18 – an 18.4in machine with an identical focus on multimedia, albeit in a much larger frame.


Aside from its greater size you’d be hard pressed to tell the difference between the HDX18 and the HDX16. It has the same basic design down to pretty much every detail and this is definitely no bad thing, since the HDX16 was a very good looking machine. All the visual elements, from the imprint design and “liquid metal” accents to the backlit HP logo and edge-to-edge screen cover, work seamlessly together to create one cohesive and sophisticated whole that will look the part in any modern home. 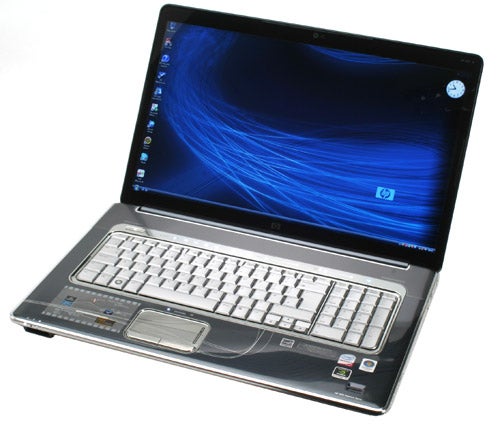 Looking inside the HDX18 continues to share the same basic layout and features; including the keyboard, which looks a bit weedy inside the 436mm wide chassis. Nonetheless, it offers an excellent experience. On the far right there’s a full-size number pad and the layout doesn’t feature any of the pitfalls some suffer, featuring a nice large Return key and right-Shift key. Keys have a nice, crisp and positive feel to them and though there is a little more flex than we’d really like around the Return key and number pad, it doesn’t have a detrimental effect on typing. 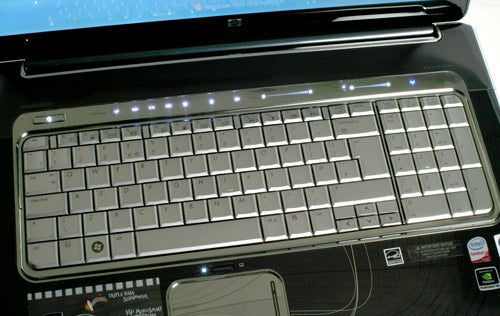 Above the keyboard is an identical set of touch sensitive media controls that are backlit behind a frosted glass-like effect. These encompass all the usual things, such as playback controls, volume, an eject button for the integrated Blu-ray ROM/DVD+/-RW drive and a wireless radio switch, as well as a secondary slider where you can adjust treble and bass independently. This is a nice touch and is especially useful when listening to music, where you might want to adjust things to find the right sound for a particular genre.


This brings us neatly onto the subject of audio and it’s an area where the HDX18 excels. With speakers from Altec Lansing and Dolby Home Theatre audio processing, the HDX18 delivers an impressive amount of detail in action scenes, with Dolby’s Natural Bass and Sound Expander technology doing a particularly good job in acoustically complex action scenes. With Dolby Headphone also on-hand for virtual surround sound you can enjoy excellent audio when plugged in. 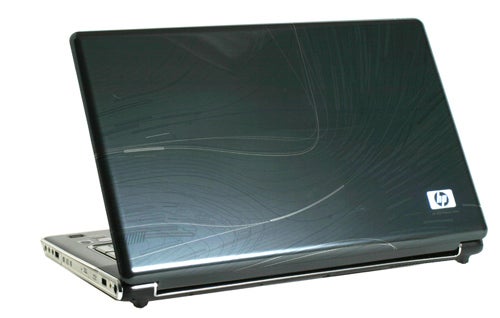 Overall, then, in terms of audio the HDX18 comes out very well, proving slightly better than the HDX16 and only really bested by the likes of the Toshiba Qosmio G50-115, whose lack of a Blu-ray drive means it only offers indirect competition.

Just as important as audio in a multimedia notebook is the visual performance and the 18.4in screen on the HDX18 doesn’t disappoint, either. Sporting the essential Full HD 1,920 x 1,080 resolution, it offers pin sharp visuals and text production and plenty of space for productivity when more boring tasks are the order of the day. And, when you want to watch a Blu-ray film or DVD, it delivers smooth motion, good detail and well defined colours. Black levels aren’t astonishing, but are still more than adequate, while we found the 18.4in acreage a good size for comfortable viewing of films – a point further enhanced by reasonably good viewing angles that should ensure a minimum of neck craning. Our only caveat would be the predictably reflective glossy screen, which makes keeping ambient light to a minimum necessary. 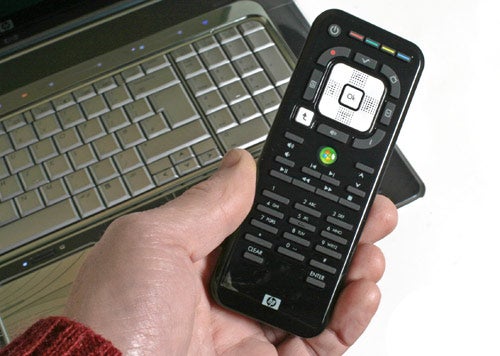 Also included as part of the multimedia bundle is an integrated TV tuner and HP has included not one, but two remote controls to deal with it and all the other multimedia features. One is an ExpressCard style remote that’s useful when taking your machine out and about, while the other is a larger full function remote complete with a number pad and other TV centric controls. Both are very good, with logical layouts and responsive buttons, while the 360 dial on the ExpressCard remote is particularly handy when navigating Media Center’s menus.


Connectivity, meanwhile, is just as thorough as the rest of the feature set. You get four USB ports in all, one of which is a combined eSATA and USB port, there’s an HDMI output (as you would expect), as well dual-headphone outputs and a microphone input. One slight annoyance is how the IR receiver is hidden beneath the trim at the front, which can make line of sight awkward when standing up, but otherwise there’s little to complain about.

On the inside the HDX18-1005ea features largely the same components seen in the HDX16 with the same model designation. Processing is handled by an Intel Core 2 Duo P8400 running at 2.26GHz, there’s 4GB of 800MHz DDR2 RAM and all the basics, such as Gigabit Ethernet, Draft-N Wi-Fi and Bluetooth, are present and correct. Graphics are handled by an nVidia 9600M GT with 512MB of dedicated memory, which is enough to handle some light gaming duties if you turn the effects down and perhaps the resolution, and there’s the added bonus of 64-bit Windows Vista Home Premium, so all that system memory doesn’t go to waste.

Indeed, the only real difference is the hard drive configuration, where you get two 250GB 5,400rpm drives instead of a single 320GB one. Also available in the HDX18 range is the HDX18-1103ea, which boasts a 2.0GHz quad-core Q9000 and two 320GB drives, though this configuration comes in at just under £1,500 so is significantly more expensive than the model we’re looking at today version. Moreover, unless you’re doing a lot of video processing, you’ll probably find the higher clocked CPU in the HDX18-1005ea will make it faster in most tasks, so it’s worth thinking about what you need if you’re tempted by the idea of a quad-core processor.

As you might imagine given the very similar specification, the HDX18 performs more or less identically to the HDX16 and the Acer Aspire 6935G in all of our tests. All told, though the HDX18 is no powerhouse, it’s more than powerful enough to deal with all the things most users will throw at it. Moreover, having a 64-bit OS and 4GB RAM means any memory intensive programs won’t suffer. 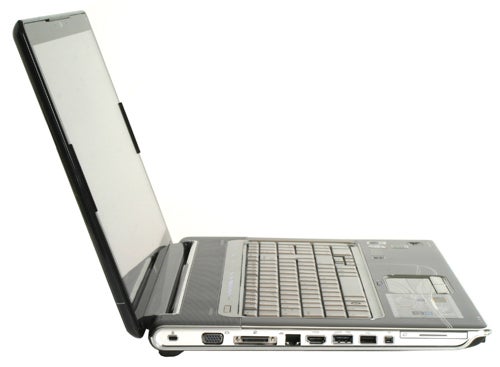 In gaming, meanwhile, the HDX18 is a capable performer, even if it lacks the graphical grunt to play some of the more demanding titles – you can forget about Crysis for certain. In Trackmania Nations Forever, however, we managed to get a playable 31.1 frames per second (fps) at 1,920 x 1,080 with detail set to high. Adding 4 samples of anti-aliasing brought this down to 23.8fps, while at medium settings with 4x anti-aliasing the HDX18 produced a smooth 37.7fps.


And, while battery life isn’t a major concern in a machine such as this, the HDX18 didn’t perform too badly lasting just over two and a half hours in the Productivity segment, two hours and 48 minutes in the Reader test and one hour and 48 minutes in DVD test. 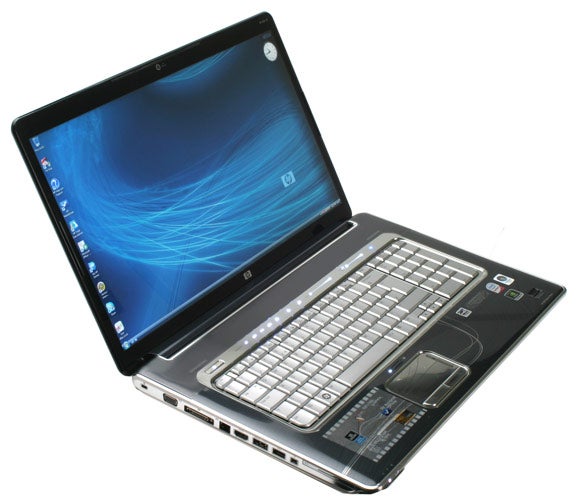 In reality, though, the HDX18 is bound to spend most of its life sitting on a desk and plugged in and for this it’s very well suited. It’s got just the right balance of components and features, ensuring it can do everything you’re likely to want without slowing to a crawl, while also keeping the price down to an acceptable level.


If you’re after a desktop replacement with all the trimmings but don’t want to pay the earth, the HP HDX18-1005ea should definitely be on your list. It has all the features a multimedia machine should have, looks the part and makes for an excellent day-to-day family PC.