One of the more obvious trends of 2008 has been the move towards 16:9 aspect ratio screens on notebooks. Though this has been sold as a “feature”, providing a more film friendly aspect for watching DVDs and Blu-ray discs, it’s just as much a cost cutting exercise, since it allows LCD manufacturers get more screens from a single panel of glass. Cynicism aside, however, it’s a trend we heartily approve of since there wasn’t a great deal of logic in having 16:10 screens anyway and a 16:9 display is intrinsically better suited to multimedia viewing – it’s not just marketing guff.


All this said we’ve yet to come across a 16:9 effort that quite delivered on all fronts. Acer has probably come closest, with the Aspire 6935G offering a particularly good value option, but it’s sometimes hard to escape the feeling that Acer has thrown in all the features it could think of without as much thought as to how they fitted together. HP has done things differently, with the HDX Premium Series that, like Acer’s Aspire Blue range, consists of 16in and 18.4in models called the HDX 16 and HDX 18 respectively. As has been the case with HP in recent years, they deliver a pleasingly cohesive design and plenty of quality features. Indeed, the HDX 16 we’re looking at today is the best example of a 16:9 “multimedia” notebook we’ve yet seen. 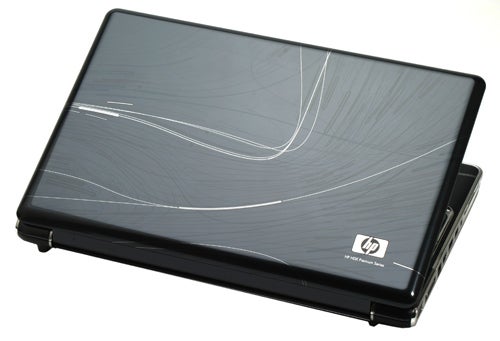 Starting with its appearance, HP’s love for artistic “imprint” designs makes a welcome return. Finished in a subtle midnight blue, the lid is adorned with a cacophony of vary-coloured swirls that, combined with HP’s smart backlit logo, immediately lend the HDX 16 the premium look and feel that’s intended. This is continued on the inside, too; the swirls sweeping around and across the smooth faux-chrome (or “liquid metal” as HP likes to call it) touchpad. 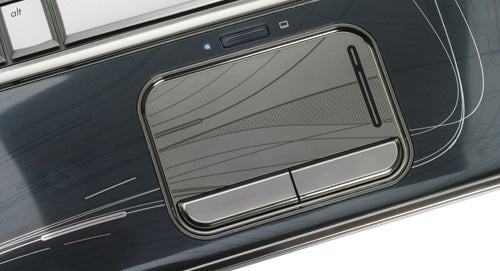 This contrasts nicely with the silver accenting and keyboard, while the edge-to-edge screen cover that we first saw on the Pavilion dv5-1011ea makes a welcome return. This helps create a seamless glossy black bezel, a feature also seen on the new Apple MacBook and MacBook Pro and an effect that’s every bit as attractive as when we first saw it.


Within this bezel, of course, sits the 16in screen and this has two important features. First, it has a Full HD, 1,920 x 1,080 resolution; secondly, it has a dual-lamp backlight. The former is obviously a massive attraction, since it’s the perfect resolution for watching high definition material and there’s a Blu-ray drive on hand to take advantage of this. On the latter, the dual-lamp backlight helps boost brightness and, more importantly, colour production – making colours richer and more vibrant. 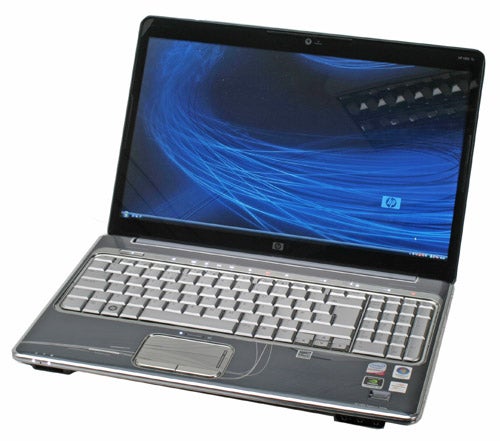 Suffice to say the finished product is very impressive. Given the high pixel per inch count the screen is incredibly sharp, producing detailed video, photos and easily read text. Colour production is also very good; colours are vibrant without being overblown and gradations smooth and free of obvious banding. Viewing angles are pretty good, though in brighter light the glossy screen does hamper things somewhat. All told, though, video and other media is well handled and the high resolution screen is ideal for more boring productivity tasks, too.

This accomplished visual performance is matched by excellent audio. It might not have a “bass tube” like the Acer, but it does feature two discrete drivers and a mid-range woofer and these do just as good a job. Fine, they still won’t best even a mediocre pair of separate speakers, but you could watch a film and enjoy reasonably punchy explosions and clear dialogue.

Dolby Home Theatre technology is also present, adding excellent virtual surround effects for speakers and headphones, or real surround sound for capable speakers. Our only gripe is that you can only obtain an optical audio output via a separately sold docking station, but if you do want to use the HDX 16 like this it’s probably a useful investment anyway.


Included in the box is not one but two media remotes. One is the 54mm ExpressCard style remote we’ve seen in dozens of notebooks, while the other is a larger remote with a full number pad. Though fairly unremarkable in most respects, the ExpressCard remote does add something we haven’t seen before: a 360 degree dial. This proved particularly handy for navigating Media Center (see the video review for evidence of this), while the larger remote features an intuitive layout and crisp buttons, making it perfect for controlling the integrated Digital TV Tuner. 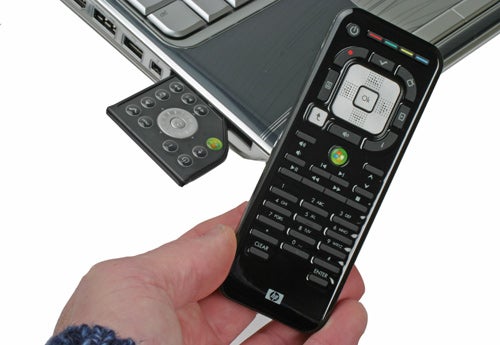 Sticking with input devices for a little longer, the keyboard is large and roomy and has a handy numeric keypad to the right. This does mean the keyboard is slightly off-centre, but the keypad is more useful than the slightly confusing CineDash on the Acer. As for the keyboard itself, there is a modicum of flex in there, but keys have a crisp and positive action that ensures brisk and painless typing. Below it the touchpad is well proportioned and has a pleasant smooth finish. Its buttons are of the sprung variety, so don’t ‘click’, but they feel very durable and offer plenty of feedback.


Above the keyboard sits a bank of touch sensitive buttons. These consist of media playback controls, a shortcut for HP’s MediaSmart software, volume controls and a wireless radio switch. You can even adjust the treble and bass levels with a secondary slider, though we found using these as sliders was awkward and inaccurate, so it’s easier just to tap the ‘plus’ and ‘minus’ icons to adjust things. Besides this all the buttons are easy to use and, thanks to the frosted glass effect and backlighting, look pretty cool. 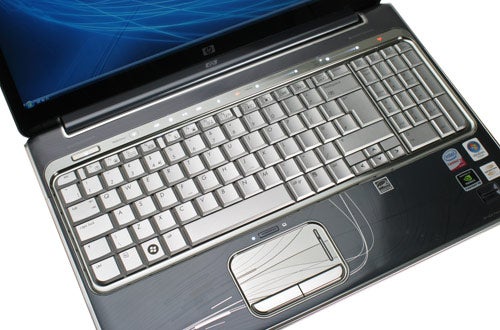 And since we’ve just mentioned MediaSmart, it’s worth noting that it has seen something of a face-lift. This is largely to bring it into line with the TouchSmart interface seen on the likes of the HP TouchSmart IQ500, which is a significant improvement over the previous incarnation. It does, as before, replicate some of the functionality of Windows Media Center, but neat features like a battery meter on the GUI are quite useful if watching a film on battery power.

Things continue to look good when you inspect the contents of the HDX 16. Powering it all is an Intel Core 2 Duo P8400 that runs at 2.26GHz and this is backed by a generous 4GB of 800MHz DDR2 RAM. This might not be the DDR3 RAM we’ve seen in some machines of late, but the performance difference is pretty minimal and unlike many notebooks this is matched with a 64-bit install of Windows Vista Home Premium, so none of that RAM goes to waste.

For storage there’s a 320GB hard drive and though this isn’t massive, especially for a notebook that has a Digital TV Tuner, it’s not small either and demanding users can always fall back on readily available and cheap external storage. There’s also a Blu-ray drive, though only a reader not a writer, so you’ll have to rely on DVDs for backing up to disc. And, if you do this a lot, you’ll be glad for the LightScribe disc labelling support.


Powering the graphics is a 512MB nVidia 9600M GT. This is a relatively capable chip that’ll deal with some games, though don’t expect them to be playable at the 1,920 x 1,080 native resolution – not at decent settings, at least.

Since this is a Centrino 2 notebook Intel Draft-N Wi-Fi is a given, while Gigabit Ethernet and Bluetooth are also included. Keeping in mind all this and the presence of a Full HD screen, the HDX 16 unsurprisingly continues to impress with its connectivity.


There are four USB ports in total, one of which moonlights as an eSATA port for faster connection to external hard drives. HDMI is obviously available, as is VGA to complete the video connectivity. If you have any FireWire capable items, such as a camcorder, there’s a four-pin FireWire port available and the 54mm ExpressCard slot can be used for the supplied remote or any ExpressCard devices you might need to use.

Housed on the front of the machine, where they can be easily accessed, are a memory card reader and the audio connections. Card support includes SD, SDHC, MMC, Memory Stick, MS PRO and xD formats, so whatever your camera uses it can take it, while audio connections include dual headphone outputs and a microphone input – these together can also be used for surround sound. 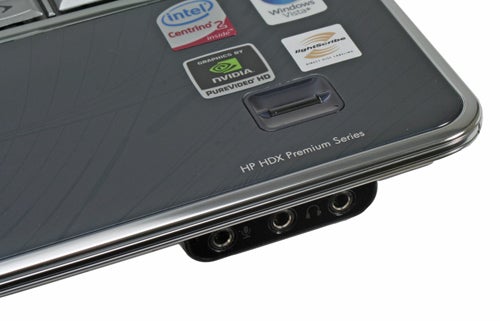 Like many consumer notebooks these days there’s even a fingerprint reader – useful if you don’t like remembering passwords – while for the video chatters out there, there’s a very capable 1.3 megapixel webcam.

Just in case you were getting bored of the superlatives, one of the few negative points about the HDX 16 is its battery life. In the Productivity test it managed less than two and a half hours, only just reaching this milestone in the lower intensity Reader test. At 100 per cent brightness, DVD playback came to an end just short of an hour and a half. You could, of course, get more than this by reducing the brightness, but the dual-lamp backlight clearly has a significant impact battery life. 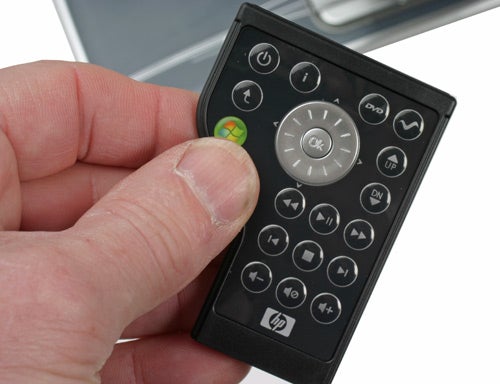 However, given this is a desktop replacement, battery life is the one area we can forgive some weakness and the raw performance can’t really be faulted. Though we wouldn’t characterise the HDX 16 as a powerhouse, it performed well in all our benchmarks and benefited particularly well in PCMark Vantage due to its 64-bit OS. Therefore, unless you’re very demanding, it’ll deal with everything you throw at it fairly comfortably. 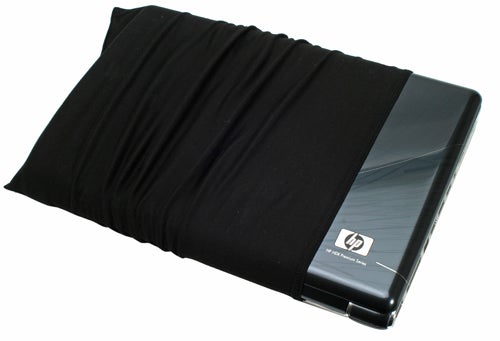 This rounds things off rather nicely, yet despite the excellent design, multitude of features and good performance, the best thing about the HDX16-1005ea is the price. We reckoned, at around £900, that the Acer Aspire 6935G was excellent value, but the HDX 16 can be had for as little as £869.99! Given it brings with it a Full HD display, compared to the ‘HD Ready’ one found in the Acer, a better design and a few extra accessories and features, too, the HDX 16 represents quite astonishing value. 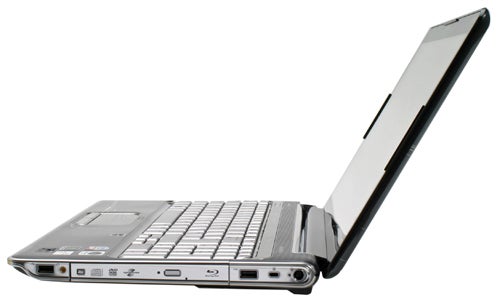 
If you’re after a fully-featured desktop replacement with “all the trimmings”, the HP HDX 16 delivers on pretty much every level and represents superb value for money. In fact, we can’t think of any reasonable reason not to buy it.