HP’s latest Envy laptop places an emphasis on portability and flexibility. We’re reviewing the HP Envy x360 13 version here and have recently had some hands-on time with the HP Envy x360 15, its 15-inch counterpart.

At quick glance, the HP Envy x360 (13-ag0003na) is a seriously slim and light notebook to rival Dell’s XPS 13. However, it has a cunning trick up its non-existent sleeves.

Like the Acer Spin 5 and various Chromebooks such as the Flip C302C from Asus, this Envy laptop features a 360-degree hinge, hence the x360 designation. The screen can be pushed all the way around until the device turns into a kind of makeshift tablet. Combined with the touchscreen display, you can use this laptop for sketching, editing documents and plenty more.

One thing’s for sure, the Envy x360 13 is designed for a life on the road. That aluminium chassis is perfectly compact, with a slender bezel surrounding the 13.3-inch display. At just 1.3kg, carrying it around is no burden either – you can slip it into a decent-sized handbag and pretty much forget about it until needed.

Of course, if you’re shoving a device in your bag and lugging it around all day, you’ll want a degree of durability too. Thankfully, the HP Envy x360 13 is no wuss. That lid is reassuringly firm to provide adequate protection for the display, while the rest of the chassis is just as solid. You can prod and squeeze the HP Envy x360 13 as much as you like, but you’ll only see the tiniest bit of flex. 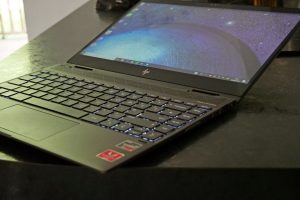 HP’s design work is both smart and attractive. The dark silver finish certainly looks neat, with some finer detailing to help it stand out from the crowd. From the patterned surfacing between the hinges to the mosaic speaker grille, the Envy is pleasingly distinctive – quite a feat when many rivals seem content to continue with the same-old plain and boring look.

Of course, the x360 can also morph into a tablet, if you twist the screen all the way back. It isn’t as light or convenient as an iPad, but this form is fine for enjoying a digital magazine or watching a movie while travelling. The dual hinges seem to be perfectly strong and reliable, while Windows automatically switches to its touch-orientated tablet mode when you flip the display around.

Despite its slim and compact build, HP has somehow found space for two full-sized USB 3.1 ports. Sadly, there’s only a single Type-C connector, although this doesn’t have to be used for power. The Envy x360 has a standard charging port to fit the bundled adapter and plug. That Type-C connection offers DisplayPort support, while there’s also a handy microSD memory card reader.

Unfortunately, one of the Envy x360’s major weaknesses is the keyboard and touchpad. While perfectly fine for everyday use, HP can’t match rivals Dell, Acer and Asus for usability.

The keyboard stretches from edge to edge, so it’s certainly well spaced. Each key is a good size and comfortably separated from its neighbours. However, the board feels a little spongy towards the centre – not to any troublesome degree, but I missed the firm action of the Dell XPS 13. 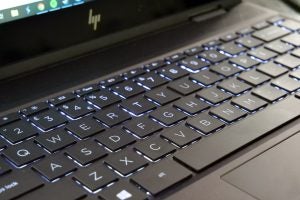 I was tripped up somewhat more by the extra column of keys over along the right edge. This bonus column holds dedicated keys for Pg Dn, Pg Up and so on, with the unfortunate consequence that the return and backspace keys are pushed inwards. The result was that when touch-typing, I found that instead of starting a new paragraph I’d often inadvertently end up skipping halfway through my document. The fact that the Return key is compressed into a single row only exacerbated the situation, so I had to regularly force myself to glance down at the keyboard.

Of course, that’s something you’ll eventually get to grips with after using the Envy x360 for a few days. All the same, it continues to prove annoying whenever I let my guard down.

Thankfully, that’s it for the keyboard foibles. Elsewhere the board is fully (if rather unevenly) backlit, so you can beaver away in the dark, while every key proved perfectly responsive to my frantic taps.

Housed in the slender palm-rest is a slightly squashed touchpad, which proves occasionally frustrating too. It isn’t sensitive or responsive enough for subtle gestures, while it also feels quite sticky compared with rivals. Thankfully, the Envy’s 13-inch display supports touch, so I just forgot about the touchpad and poked the screen instead. Problem solved. 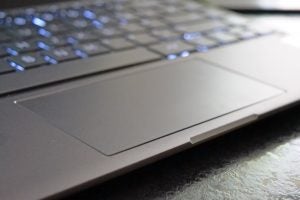 That 13.3-inch IPS display helps the Envy x360 to redeem itself somewhat, producing crisp and good-looking visuals, no matter what you’re up to. The Full HD resolution means photos and movies are packed with detail, especially given the compact size of this screen. Even if you squash your face up against the panel, you’ll still need killer eyesight to make out any individual pixels.

Colour reproduction isn’t perfectly accurate, although the Envy will do the job for photo editing and other creative tasks. A respectable 95% of the sRGB gamut is covered, along with 74% of Adobe RGB. Likewise, the default colour temperature of 6900k is close to the ideal of 6500k, if a little on the cool side. 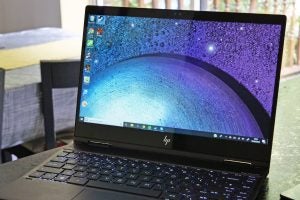 We’ve seen better contrast levels from the likes of Dell’s XPS machines, but the 840:1 rating is still fine for basic creative use, or simply enjoying movies on the go. However, the display brightness does top out at just over 300 nits, so you may struggle to see what’s going on when using the HP Envy x360 outdoors on a sunny day.

Thanks to those flexible hinges, you can prop up the Envy in ‘tent mode’. This is a great way to take in a show on the move, especially when travelling with others – as long as you’ve got a flat surface on which to rest the device, of course.

Above the keyboard you’ll find a narrow speaker grille that stretches from left to right, directing audio straight at your face – just the way we like it. In addition, you get two speaker grilles in the usual spots down below. These help out when you’re watching content in ‘tent mode’, as the main speakers will suddenly be pointing in the wrong direction. 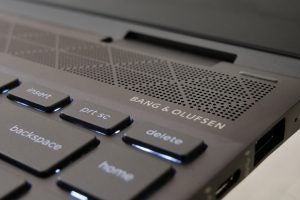 Sitting beside the main speaker is a Bang & Olufsen logo, revealing that the Danish designer company has had some hand in the tuning of the quad-speaker arrangement.

Regardless of how much of an input B&O has actually had here, the HP Envy x360 can certainly belt out some decent sounds. At peak volume, I could happily watch some TV shows while cooking in a busy kitchen. Of course, audio quality takes a bit of a hit at those top levels, particularly when listening to rowdy rock music. All of the instruments tended to merge together into a solid wall of noise, so you’d be better off plugging in some headphones or speakers for full-on rocking out.

Packed inside this HP laptop is AMD’s Ryzen 7 2700U chipset, running at 2GHz. This is supported by 8GB of DDR4 memory, for smooth everyday performance.

In our benchmark tests, the Envy didn’t throw up any surprises. Results were comparable to other mid-range devices such as the Asus ZenBook UX430UA, although Acer’s Spin 5 had it beat. The Spin proved much stronger for multi-core performance, offering a Geekbench score of 13,180 compared with the x360’s 7030.

That said, I found that this laptop handled quite intensive use without breaking much sweat. Even multi-tasking with several apps at once, including a Chrome browser session with a couple of dozen tabs open, didn’t cause the Envy x360 to stutter or stumble. I could happily edit photos while listening to Spotify, messaging mates and browsing the web, flipping between the various windows without delay. 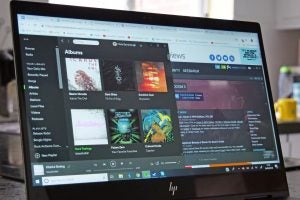 AMD’s own Radeon Vega 10 graphics handles the visuals, tackling simple creative tasks and entry-level gaming without issue. You won’t be able to play anything demanding, but I found that older titles such as Serious Sam and Skyrim were butter-smooth at higher detail settings.

You get 512GB of SSD storage space for your apps, games and the rest, and that solid state drive is reasonably nippy. Our tests churned out read speeds of 1327Mbps, along with write speeds of 696Mbps.

Sadly, for such a portable laptop, the Envy x360 doesn’t impress when it comes to battery life. I found that it often managed just four hours of mixed use per charge, including working online while streaming music and playing around with various apps. That lags well behind the likes of the XPS 13, LG Gram and Huawei’s MateBook X Pro, which tend to offer five to six hours of working time before the battery dies.

The Envy x360 lasted just shy of five and a half hours in our standard battery test, which involves a loop of web browsing and video playback on medium brightness levels.

As far as portability goes, the Envy x360 boasts a super-slim and light design that also looks really smart. It’s well suited to life on the go, although the battery life lags behind some rivals – you’ll need to lug around that adapter for all-day use. Still, everyday performance is solid and you can even get away with some creative use and a spot of light gaming thanks to AMD’s internals.

Our only other complaint is the mixed usability, yet the touchscreen support helps out in that area.

Despite some usability issues and disappointing battery life, the HP Envy x360 is a pleasingly portable laptop offering decent grunt for its size.