What is the HP Envy 34 Curved All-in-One?

An all-in-one computer often feels like the sensible choice, combining a PC and a monitor to reduce clutter. But, why can’t these computers be just that little bit crazy and more attention grabbing? HP certainly thinks they can, as its Envy 34 Curved All-in-One demonstrates. As the name gives away, this all-in-one has a massive 34-inch curved display, making it immediately different to everything else I’ve seen.

Big it may be, but the Envy 34 is also rather attractive and grabbed my attention for all of the right reasons. The size of the screen is something of a boon for design, as it gives HP a bit more room to play with. This is a far cry from HP’s previous attempt at a curved all-in-one. It’s thoroughly grown-up, stylish and would fit into any office or home environment

Rather than a basic stand, as with most all-in-ones, HP’s stand contains all of the computer’s components, but it looks like a TV soundbase. It’s not just design, as this really is a soundbase, as the Bang & Olufsen branding attests.

Cleverly, the base has a QI wireless charging spot that lets you top-up a compatible phone (including the Samsung Galaxy S7, S8 and LG G6) just by sitting it on the left-hand side of the stand. 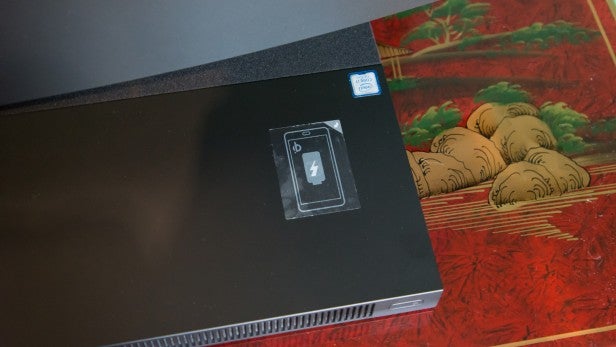 On the right-hand side of the base, you get an SD card reader and USB 3.1 Type-C port. The remaining four USB 3.0 ports and Gigabit Ethernet (there’s built-in 802.11ac Wi-Fi) are at the rear, where they’re exceptionally hard to reach as this all-in-one is heavy and cumbersome to turn. You also get an HDMI 2.0 input and HDMI 2.0 output. Having both is great, as you can add a second display if that giant screen’s not quite enough; you can also connect an additional device such as a games console or Blu-ray player. 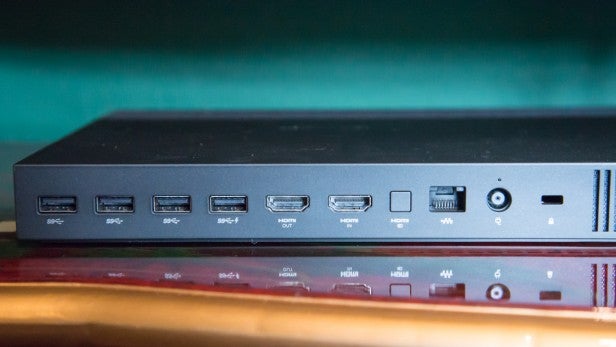 The 34-inch display juts up on a slim stand, giving the appearance that the screen is floating above the base. It’s a great-looking screen, too. I’m not usually a massive fan of curved displays, but the gentle slope of this screen isn’t too dramatic and just adds to the visual interest.

HP has used a built-in receiver for the bundled Envy wireless keyboard and mouse. Both devices come pre-paired, too, so there’s no configuration to go through. I’m a fan of the low-profile keyboard. It looks great, and the full-sized keys provide plenty of feedback and travel. Keys are a little on the soft side, but it didn’t take me long to get used to them.

It’s not quite a full-sized keyboard, and HP has ditched the Page Up, Page Down, Home and End keys to fit in the numeric keypad. It’s a mostly successful change, but I don’t like the half-sized Return key, as it made it too easy to hit the ‘#’ key by mistake. I certainly can’t complain about the integrated battery, which is recharged via a Micro USB cable. 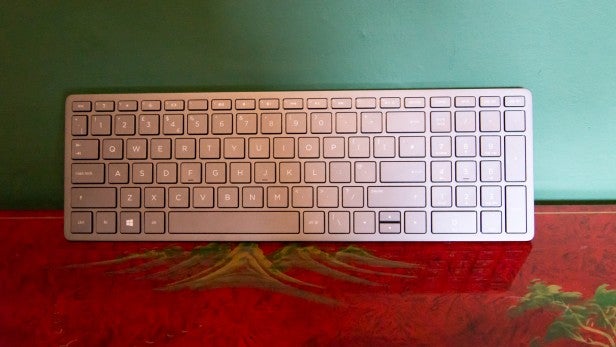 I found the wireless mouse less impressive. It is not rechargeable and takes regular batteries instead. It’s a very basic mouse, and I found its buttons soft and not particularly responsive. At this price, I’d expect something better. 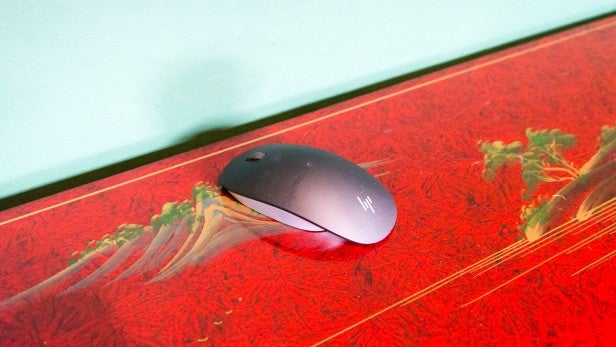 HP hasn’t used a touchscreen on this model. I don’t see that as a problem, as using touch on a display this big isn’t particularly easy. Image quality from the screen is very good, and I measured the display as able to produce 96.5% of the sRGB colour gamut. With a Delta-E of 1.44, the screen was proven to display its colours quite accurately, too. Contrast of 867:1 is a little on the low side: out of the box, the black level was 0.42 nits, with a brightness of 369 nits. To bring out detail in the darker parts of images, I had to dial the screen’s brightness down.

Related: Best monitors for all budgets

Looking through my test photos, it’s hard not to be impressed with the display. Bright and vibrant colours certainly made everything stand out, and excellent viewing angles keep visual fidelity no matter where you sit. Working on the screen’s not-quite 4K resolution of 3,440×1,440 is great, too, with a real sense of space on the display; there’s definitely enough room to fit two apps side-by-side. Thankfully, the curve of the screen isn’t too pronounced, so you get a gentle wrap-around effect without heavy distortion. 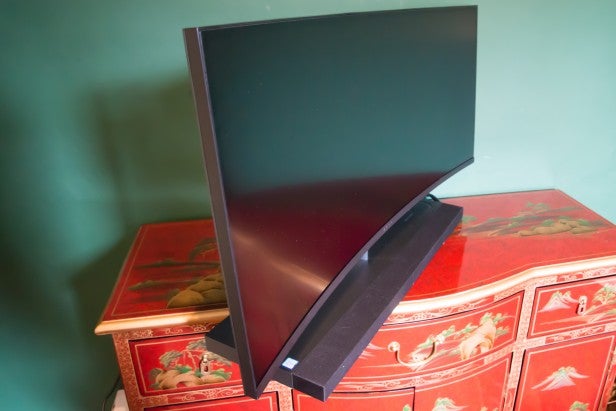 An HDMI 2.0 input lets you use the display with other devices, too. It’s a little annoying that the input selector is a tiny button at the back, which is hard to find by feel alone.

Audio quality is excellent, as you’d hope given the sound base. Rich and clear sound, with a surprising amount of bass, meant that I didn’t feel the need to reach for headphones or external speakers. I’d definitely watch Netflix or listen to some music on this PC.

An HP TrueVision HD IR webcam pops up from the top of the screen. Image quality is good enough for online video chats and has integrated microphones for audio. The main use of the camera is for Windows Hello so that Windows 10 can log you in automatically when it recognises your face in front of the screen. It works brilliantly, and Windows Hello is far more convenient than having to type in a password. 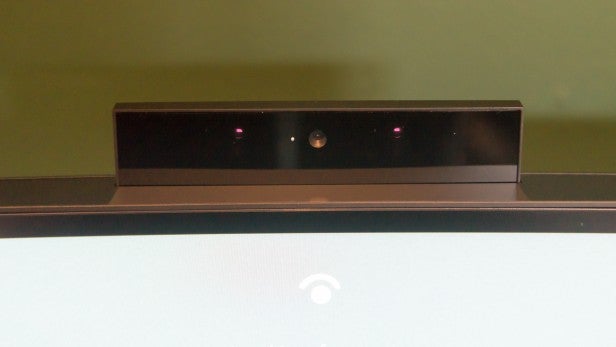 HP has fitted 8GB of RAM and an Intel Core i7-7700T processor, which is a low-power chip with a thermal design power (TDP) of just 35W (the standard i7-7700 has a TDP of 65W). The i7-7700T has four cores with Hyper-Threading adding four more virtual cores. This chip runs at a base speed of 1.9GHz, although it can Turbo up to 3.8GHz when there’s enough thermal headroom. Performance lags behind a full desktop i7-7700, but that’s not to say that the Envy 34 is particularly slow. Scoring 13,967 in the Geekbench multicore test and 5,387, this is a PC that can handle most tasks that you throw at it. However, for people serious about photo or video editing, a computer with a full desktop CPU would be a better choice.

HP has fitted an Nvidia GTX 950M with 4GB of GDDR5. It’s a mid-range graphics chip, so don’t expect to play games at the screen’s full resolution. Running the graphics benchmarks on the HP Envy 34 at a resolution of 1,920×1,080 and maximum settings, I saw Dirt Rally score 28.26fps and Shadow of Mordor score 27.49fps. That’s a little jerky, but dropping detail to Medium on both games pushed the average frame rate above 40fps. For gaming, you’ll have to accept lower quality graphics to get playable frame rates.

HP has used a fast 256GB SSD for booting and your key apps. I measured it as capable of a massive sequential read speed of 3,296MB/s and write speed of 1,510MB/s. It’s no surprise how quickly Windows booted, then. There’s also a 1TB hard disk to give you plenty of room for file storage or games.

Despite using low-power components, the HP Envy 34 produces a constant fan hum that penetrates a quiet room. Under load, the fans pick up in frequency although they’re not that much louder. I’d really like a PC at this price to be silent (or close enough) when idle, particularly as it uses low-power components. 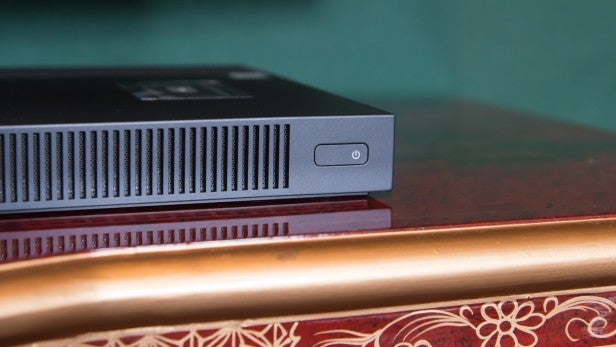 Should I buy the HP Envy 34 Curved All-in-One?

There’s a lot to like about the HP Envy 34 Curved All-in-One: it’s quick, looks great and that display really stands out. But, it’s a little noisy and relatively expensive. At this price, the Asus Zen AiO Pro Z240ICGT is a good alternative, with a 4K display and full-metal chassis. If you’re happy to stick with a plastic case, the 27-inch Lenovo IdeaCentre 910 could be a good alternative.

A great-looking and rather different all-in-one, but the Envy 34 Curved All-in-One is a little loud and quite expensive.