HP supplies the EliteOne with a 1,920×1,080-pixel touchscreen. The resolution is adequate for a 23in screen, and as a result it won’t be necessary to use any scaling options. However, its middling density level of 96ppi means that pixellation is obvious without any squinting – and it also makes it tricky to use more than two windows on this panel at once.

That firmly positions the HP as a standard office system, rather than anything that’s a cut above. There’s no chance of sharper media playback, or being able to edit photos and videos with the added precision delivered by higher-resolution panels.

Rival Windows machines with higher resolutions – or the pricier Apple iMac models – are sharper, and their higher resolutions result in greater screen real-estate, making them more versatile for work. The EliteOne’s semi-glossy finish may also prove irritating beneath bright lights. 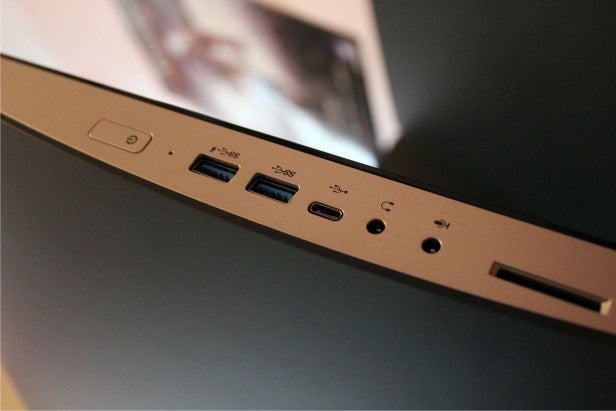 The HP performed consistently well in benchmarks, with no major issues. A contrast ratio of 1,145:1 is a stellar start – that’s higher than most dedicated screens, which means that there’s ample vibrancy in bright colours and depth in darker tones. The 0.2-nit black level helps with the latter, and the 229-nit brightness measurement will prove adequate for any office.

The average Delta E of 2.46 is great, and the colour temperature of 6,661K isn’t far removed from the 6,500K ideal. The HP’s screen displays 89.9% of the sRGB colour gamut, and it loses only a reasonable 11% of its brightness level in the corners. This is a decent uniformity result that won’t prove ruinous or noticeable.

Problems are minor. There’s that uniformity measurement and a little backlight bleed along the bottom edge. In addition, brightness and clarity tend to disappear when the screen is viewed off-centre – but that’s it.

The decent set of benchmark results ensure that the EliteOne’s screen can handle a wide variety of work tasks. It’s more than good enough for Word and Excel, and it has enough accuracy and gamut coverage to tackle photo and video-editing, too.

It will struggle only when a user needs more pixels or more accurate colours – and in that case, a discrete professional screen will always be the best bet. It’s unrealistic to expect that level of performance from a PC such as this.

HP has added some sheen to the EliteOne with Bang & Olufsen audio hardware. While this sounds impressive, in reality it means that HP’s engineers have worked with Bang & Olufsen to improve the PC’s audio firmware, not hardware. There’s no sign of software to alter the sound output, for instance, nor has the speaker hardware been beefed up.

There’s little sign of high-quality audio, either. The speakers have mighty volume, but the bass isn’t deep enough – it fails to provide the thump I expect. The mid-range is reasonable, but it lacks the detail and depth that even cheap speakers will provide; the top-end is a little tinny. The HP’s speakers are fine for video-conferencing, but I’d only use them for music if alternatives weren’t available.

Related: Best Headphones to buy in 2016

There were few surprises amid the HP’s application and gaming benchmarks. In Geekbench 3, the mid-range Core i5 chip scored 10,947 points, following up with a score of 5,896 in PCMark 7.

They’re both solid results that will allow the EliteOne to excel in most work tasks. It won’t struggle with running any Microsoft Office application, and there’s enough power to run photo-editing tools, too. Only more intensive multi-tasking will see the HP falter, and for that you’ll want a Core i7 chip with Hyper-Threading. 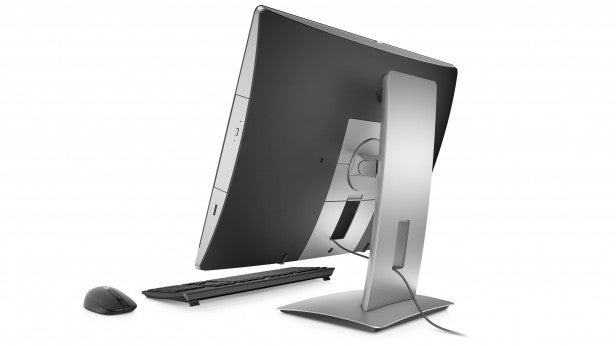 The integrated graphics core is less capable. Its 3DMark Fire Strike score of 811 is sluggish – not far ahead of laptops, but miles behind even the weakest discrete cards, so this system isn’t cut out for intensive graphical work. It will be able to handle photo processing, but anything beyond that – such as CAD or video – will require specialist GPUs.

The mid-range performance follows through to the SSD. The Samsung drive’s read speed of 505MB/sec is good, but its write pace of 289MB/sec is average at best. Both results are quicker than any hard disk – including the one inside the iMac – but better SATA SSDs and PCI-E-based drives will be faster still.

Heat and noise were never an issue with the EliteOne, either – the processor peaked at a modest 52 degrees. The HP is basically silent while handling the vast majority of tasks, and noise output was minimal even with its CPU stressed to 100%.

There’s plenty to like about the HP EliteOne 800 G2. Its processor has adequate power to handle the vast majority of office applications, the storage is reasonable, and under stress the system never became hot or noisy. The screen offers decent quality in every area, and the touchscreen unit has a sensible resolution.

The EliteOne looks good, too, thanks to its metallic finish – and that’s paired with sturdy build quality. The provision of two stands add versatility thanks to height adjustment and horizontal movement.

However, the EliteOne’s biggest problem is its  £1,343 price. For that money I’d expect a system that specialises in certain departments. The EliteOne is a good all-rounder, but it doesn’t excel in any important office areas.

The HP EliteOne is a good-quality office PC that performs well in every important department. However, it doesn’t have the ability to exceed in any particular area – and that means it’s difficult to justify its £1,343 price.